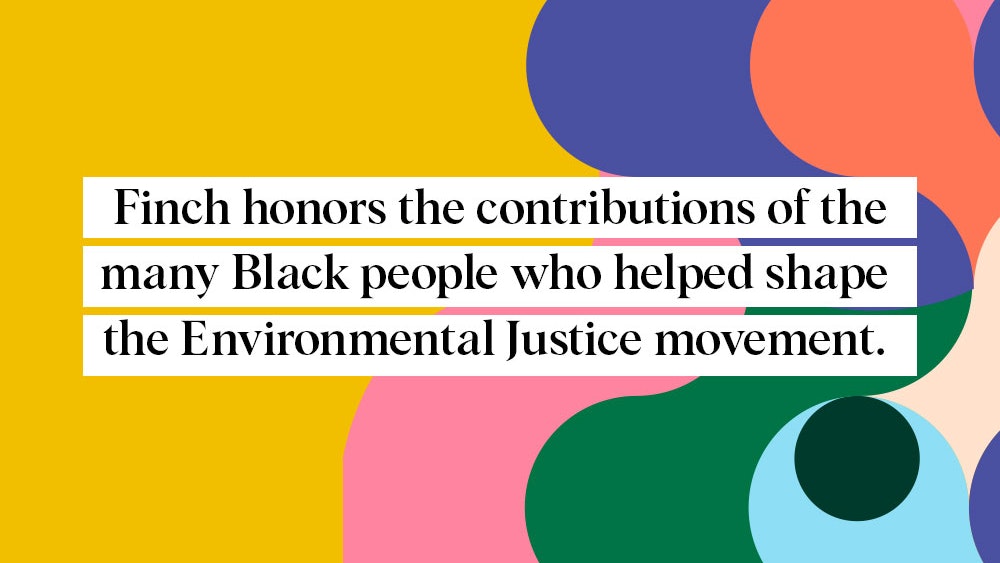 This year’s Black History Month theme is “Black Family: Representation, Identity, and Diversity,” which explores the African diaspora and the spread of Black families across the United States. While we know that colonialism, segregation and legalized racism have become officially obsolete, systemic racism still very much exists, and the legacy of such regulations has left Black people and other minority populations excessively vulnerable to ecological degradation.

Finch understands that, for most, sustainability is not a nice-to-have, it’s a necessity. We’re tired of the fact that the vast majority of sustainable products have been whitewashed and marketed towards white, upper-middle class women. Climate change not only disproportionately affects members of disadvantaged communities, including many people of color, but people of color are more concerned than white people about climate change. According to the Yale Climate Communication Study from 2010*, Hispanics, African Americans, and people of other races and ethnicities were often the strongest supporters of policies to reduce greenhouse gas emissions, even when informed that some of these policies would entail individual costs. Many believe that climate change is primarily a concern of upper- and middle-class whites, while minorities are focused only on issues of environmental justice, or the fair treatment of all people regardless of race, color, or income with respect to the development of environmental laws and policies. This national study strongly suggests that these assumptions are wrong and that the Latinx and African Population populations were often the strongest supporters of climate and energy policies even if they incurred greater costs.

[*Note: We believe a lot has changed in the past 11 years, but our research indicates that these sentiments have only strengthened since then.]

In June of 2020, I wrote about how climate justice and racial justice were inextricably linked and urged our community to further educate themselves from people who are far better equipped to speak on these issues than I am. Since then, we’ve added a few more. Enjoy, and please let us know what you think.

ROBERT BULLARD ON HOW ENVIRONMENTAL RACISM SHAPES THE US:

“The environmental movement shouldn’t just stop at calling out racism. It needs to raise more voices and make sure they’re heard in order to imagine and illustrate the future and make real the world we want to have.”

“I yell into the void, ‘Global warming is ruining the planet. We are doomed!’ and she whispers, ‘Make the plan. Implement the plan…’ She understands that the environmental movement must address its legacy of systemic racism. Johnson is recruiting everyone to do the work.”

ELIZABETH YEAMPIERRE ON THE DEEP LINKS BETWEEN RACISM AND CLIMATE CHANGE:

“A lot of times when people talk about environmental justice they go back to the 1970s or ‘60s. But I think about the slave quarters. I think about people who got the worst food, the worst health care, the worst treatment, and when freed, were given lands that were eventually surrounded by things like petrochemical industries.”

“Now that Biden has pledged a ‘climate administration’...it is urgent that we aim the country’s attention on a part of the climate movement that often gets siloed or dismissed as ancillary to the cause of solving the climate crisis: the grassroots BIPOC-led powerbuilding groups that center justice in all the work they do. These groups understand what many white activists - however well intentioned - fail to see: without the power boldness and genius of BIPOC communities, we will not defeat climate change. We are not ancillary. We are necessary.”