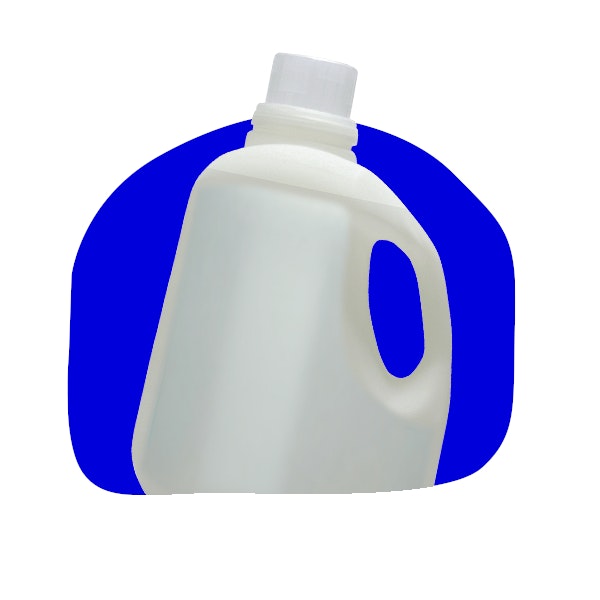 Hey! Now that we’ve gotten your attention with our greenwash-y, SEO-friendly title (thanks, Google), you should know that while there’s no such thing as “eco-friendly” laundry detergent, here’s what to be wise on when you’re shopping so you can pick the best option for you, the planet, and the people making your stuff.﻿

We love the smell of fresh laundry. Who doesn’t? But did you know that cleaning all of those clothes has led us to do more than 30 billion loads of laundry in North America annually? That’s a lot of soap going down our pipes and ultimately, into our water streams. Below, we’ve done a deep dive into laundry detergent so that you can choose wisely.

The ingredients in laundry detergent can be put into four categories that each serve a specific purpose: surfactants, builders, bleaches and enzymes.

Surfactant molecules are kind of like the post-game cleaning staff at Madison Square Garden who pick up all the trash after the fans have left. They attach themselves to filth that is released into the washing machine’s water and carry the filth away when the water is drained.

Builders are like the concert security ushering all the fans out after a show so that the cleaning staff can do their thing. Imagine janitorial staff trying to clean an arena with a packed crowd? Not possible. Like janitors, surfactants need everyone gone to do their job, which is why builders remove minerals such as calcium and magnesium from the water so that the surfactant molecules can work efficiently.

Bleach and enzymes are like the actual cleaning agents that the staff uses to get rid of gunk in the arena. Bleach gets rid of organic stains (such as coffee), and enzymes eradicate grease, protein, and starch stains (such as olive oil, milk, and flour).

Some of these components can be made of chemical compounds that, in their most harmful forms, are problematic for our health and the health of marine life. For example, surfactant molecules can get into the gills of fish and inhibit them from efficiently drawing oxygen from the water. If that’s not horrifying enough, many of these chemical compounds are considered proprietary trade secrets, so companies are not required by law to disclose them on detergent packaging. This makes it nearly impossible for consumers to know what they’re buying. That’s where we come in.

check out our top-rated laundry detergents

We love detergents that come in plastic-free packaging, and those certified by EPA Safer Choice. Avoid lofty claims like “odor blaster” or “white reviver.” These usually mean the product is packed with nasty chemicals that could cause rashes for those with sensitive skin and harm aquatic life once in the waterways.

Liquid detergent is the most popular detergent on the market and can be the most affordable option, but it’s very watered down and therefore requires a ton of fuel to ship around. Liquid detergent is usually packaged in PET plastic or HDPE plastic bottles that, at scale, contribute to about 2.6 million tons of PET and HDPE landfill waste every year. While PET and HDPE plastics are the most widely recycled, they must be cleaned beforehand.

If you’ve ever tried to clean a bottle of sudsy laundry detergent, you know how much water that can require. Moreover, only about 9% of plastics actually end up recycled, so we can’t say for sure that it’s even worth it to waste a bunch of water rinsing these out. For all of these reasons, none of our recommendations fall under this category.

Powder detergent is great, especially if it’s sold in cardboard boxes that cut down on plastic waste. Keep in mind that liquid detergent is a better choice if you wash your laundry on cold cycles, as powder can leave residue if it doesn’t fully dissolve in cold water.

Pods are very convenient, and great if you’re prone to over-using detergent because they are pre-measured. However, they are usually a more expensive option and are often packaged in plastic PET containers that drive up the carbon footprint of the product overall. Pods sold in a PET container have about twice the global warming potential compared to pods sold in a flexible pouch.

Detergent tablets are conveniently portioned like pods are, which we love.

Detergent sheets are a new liquid-less option that seems really promising. This new type of detergent has its ingredients packed into a sheet that dissolves in water. It is super light to ship, requiring less fuel. Since they’re liquid-less, they use less water and usually no plastic packaging.

Soap nuts are dried soapberries used in lieu of detergent. They are a great option from an environmental standpoint but have received mixed reviews on their ability to remove stains. If you try them, let us know what you think!

Quantifying the environmental footprint of liquid vs. pods vs. tablets vs. sheets hasn’t been scientifically verified, but the data seems to indicate that sheets are the most promising due to their lightweight nature and minimal water consumption.