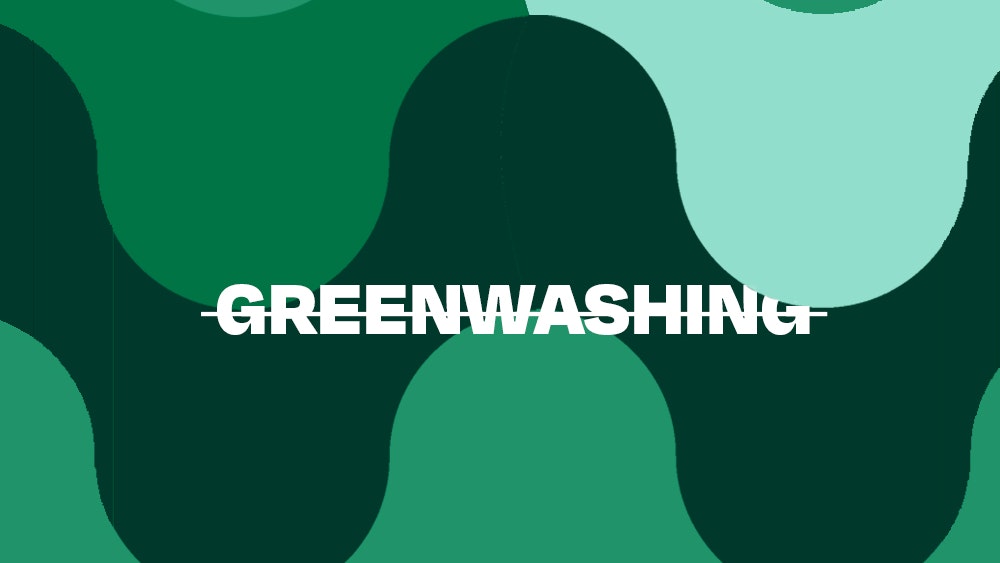 Words mean things; this is a fact of life. But in the world of product advertising, not all words are created equal. Now that sustainability is mainstream, and more folks are voting with their dollars, it’s easy to understand why brands want to associate their products with positive environmental outcomes. Enter “greenwashing,” the practice of exaggerating, or downright lying about, the environmental impact of products or services. Greenwashing makes it difficult to separate fluffy eco-jargon from the labels with meaning. Worry not! Knowing its origins and tactics can help you spot it the next time you’re browsing retail shelves.

Greenwashing is not a new phenomenon and in fact dates back to the 1980s. A New York environmentalist, Jay Westervelt first coined the term “greenwashing” after noticing so many hotels participate in the “save the towel” movement. Hoteliers made it seem like urging guests to reuse their towels was part of a comprehensive environmental strategy to preserve local water resources, but it was largely a cost-saving measure. Such a hyper focus on towel reuse in absence of any broader commitment to environmentalism captured the essence of greenwashing and the term soon took hold.

Around the same time, growing public concern over the dangers of offshore drilling led oil and gas companies to deploy greenwashing tactics to conceal their environmental records. Chevron’s “People Do” campaign, a series of ads promoting the creation of a butterfly preserve near an active refinery, artificial coral reefs in coastal Florida, and efforts to protect grizzly bears at drilling sites cost more to advertise than the projects themselves. A whopping $10 million spent on spreading good news isn’t a crime. But, the projects, which Chevron framed as altruistic attempts to restore the environment, were actually mandated by law after rampant violations of the Clean Water and Clean Air acts. With limited access to information outside of print, radio, and television, consumers were at the mercy of questionable corporate ad campaigns spreading messages of environmental stewardship. Thankfully, environmental watchdog groups like the Sierra Club and Greenpeace emerged early on to take greenwashing companies to task.

“Green” terminology - ‘eco-friendly’ products, ‘ethical’ materials, ‘clean’ ingredients, and the like - is everywhere now. In 2009, TerraChoice analyzed over 2,000 consumer products and found 98% made problematic environmental claims. Whether it’s the claims that lack evidence, general vagueness, or relying on a narrow set of attributes, greenwashing has evolved with the times.

Why do we fall into these traps? The answer lies in human psychology and its impact on buying behavior. Increasingly, consumers seek to support brands that align with their values; 64% of consumers worldwide buy or boycott products based on a brand’s attitude towards social and political issues. Studies point to the birth of Brand Democracy - the notion that consumers perceive brands as change agents. As global consumer attitudes shift towards values like equity and environmentalism, consumers expect the same in brands they support, and product marketers certainly feel that pressure.

The real peril of greenwashing stems from consumer deceit. Greenwashing makes us believe we’re doing the right thing when we aren’t. For consumers who care about animal welfare, finding “cruelty-free” products is crucial and may lead one to support alternative materials like “vegan” leather. Unfortunately, the most common vegan leather is plastic-based (PVC), reliant on fossil fuels, and never breaks down. When brands tout vegan leather as an ethical alternative to animal hide, its connection to extractive energy and the use of synthetic chemicals is easily hidden. Greenwashing also breeds a sense of mistrust and throws all product claims into question. If we can’t trust the “green” brands, can we really trust any company? This is the existential question we face as consumers. We can never know the full extent of any company’s operations and impact, but we can think twice about the products we buy.

The moral of the story is to understand that sustainability is a sliding scale. Here’s how Finch thinks about the term “sustainable” and how you can expect to see us using it:

The good name of “sustainability” has been dragged through the mud, twisted, greenwashed, and become devoid of meaning to the average person. Finch has attempted to reclaim the word by only using it in its proper context and, where possible, replacing it with a description of the specific element or process being discussed, such as water usage, circularity of materials, or fair labor practices.