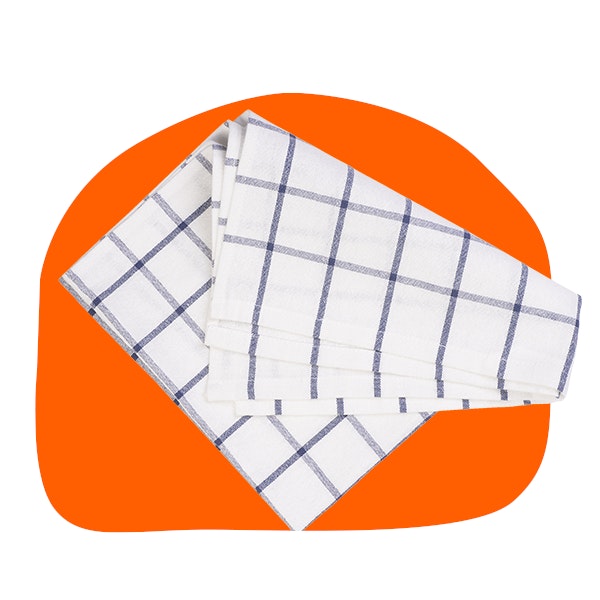 Hey! Now that we’ve gotten your attention with our greenwash-y, SEO-friendly title (thanks, Google), you should know that while there’s no such thing as “eco-friendly” dish towels, here’s what to be wise on when you’re shopping so you can pick the best option for you, the planet, and the people making your stuff.﻿

There’s a special market for products that get a lot of their value from simply replacing other, more environmentally-harmful products. The Brita and Soda Stream replace single-use beverage cans, a Stojo replaces non-recyclable Starbucks cups, and the dish towel replaces the paper towel.

CHECK OUT OUR TOP-RATED DISH TOWELS

Finch did some internal research and found that the difference in environmental impact between dish towels and paper towels isn’t as simple as we’d like to think. It really depends how many items you’re washing at once and how many times a dish towel is used between washes.

Cotton is an ideal textile for dish towels because of its absorbency properties. Like with other product categories, we recommend organic cotton so that it’s cultivated without the use of toxic pesticides or fertilizers. We also love dish towels made from recycled yarns, which are often produced using pre-consumer waste, such as scraps cut for other goods. Recycled yarn not only diverts waste from landfills, but also reduces the energy, water, and dye used. Sure, polyester dries fastest so technically could use less energy in the drier, but if you’re throwing your dish towels in with a larger load of clothes, that benefit is negligible because the dry time will be determined by whatever article takes longest to dry. Plus, polyester sheds microplastics when washed, which is a definite drawback.

Believe it or not, sometimes a single-use paper towel is more efficient and less environmentally damaging than a dish towel (like if you wash your towel after only a few uses in a half-full load). But, if you know what to pay attention to and know how to use them wisely, dish towels are the clear winner. What does science say? Using a dish towel ten times as opposed to only six times before throwing it in the laundry decreases its associated carbon footprint per use by about 40%.

You might think ten uses would lead a pretty rank rag – we recommend having plenty of them on hand and changing them out every 2-3 days. By regularly rotating through your rags, you avoid cultivating harmful bacteria and keep them from getting too musty. When you’re done, throw them in with your regular laundry cycle to save water and energy.

9 times out of 10, Finch is going to steer you in the direction of “if you have to get something, here’s the best option.” Making your own detergent may not be something you’re into (yet!), so buying is your go-to...we get it. But, dish towels are one of the few things we’d recommend tackling as your next DIY project. Old t-shirts, bath towels, and socks make incredible kitchen towels, and you might be surprised to hear that old yoga pants make delightful dish towels too, since they’re super-absorbent.