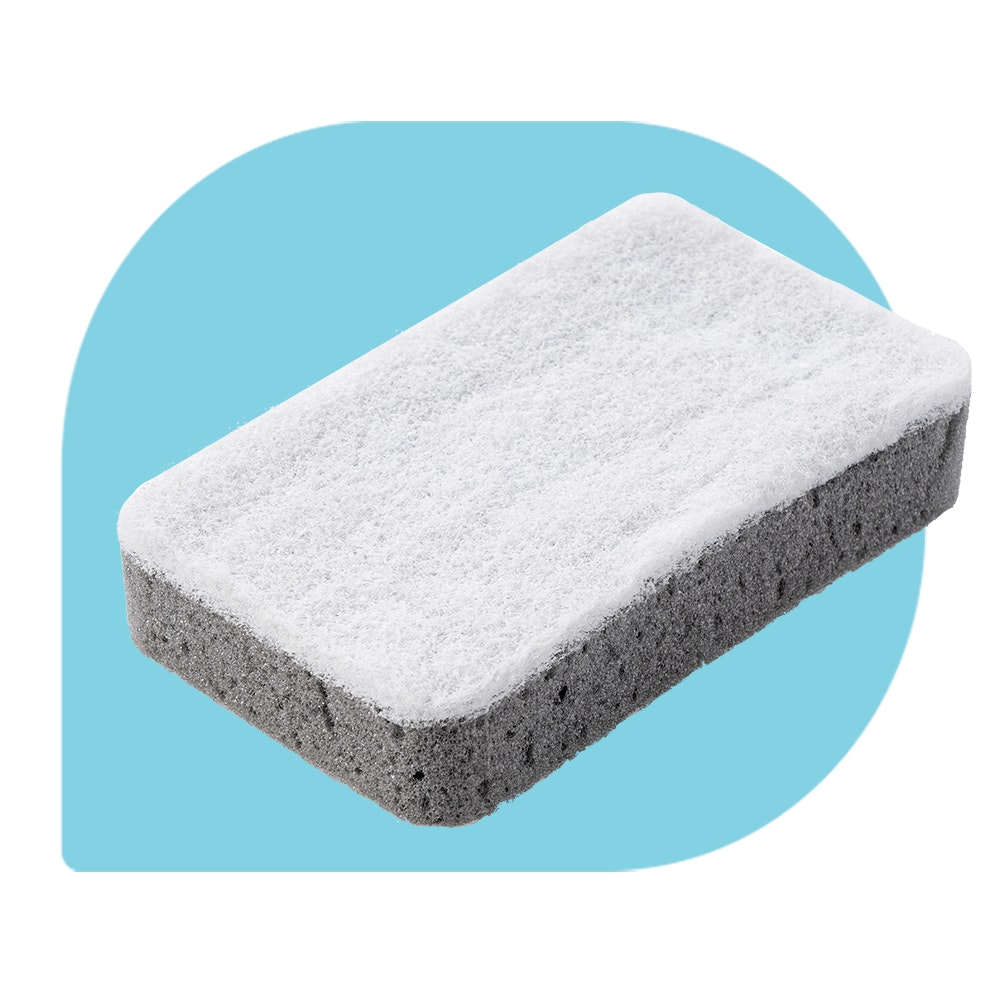 Hey! Now that we’ve gotten your attention with our greenwash-y, SEO-friendly title (thanks, Google), you should know that while there’s no such thing as “eco-friendly” sponges, here’s what to be wise on when you’re shopping so you can pick the best option for you, the planet, and the people making your stuff.﻿

﻿Veritas Odit Scotch Brite. Sponges have been used since the Roman Empire, but back then they were sea sponges pulled straight from the ocean. While it’s still possible to buy sea sponges, the most common ones today are made entirely of, or contain some amount of, plastic.

In 2020, Americans spent almost $480 million on sponges. That’s a lot of sponges when you consider that each sponge usually costs around $1 a piece. And guess where they end up? Yep… the landfill, where they contribute to about 36 million tons of plastic trash annually.

CHECK OUT OUR TOP-RATED SPONGES

Not all types of plastics can be recycled, and the kind of plastic used in sponges is one of those non-recyclable ones. This means that when it comes to doing the dirty dish work, material matters. Instead of stressing over whether your sponge will be or won’t be recycled, choose materials that are biodegradable. The great news is that there are now some great sponge options that don’t compromise their suds-sational function when we choose a biodegradable option over a non-recyclable plastic option.

In case we haven’t already made this clear yet, we think plastic sponges are super gross. Their materials are derived from crude oil and getting the foam into sponge-shape requires hydrocarbons (which are set to be phased out by 2030 because they contribute to ozone depletion). Some plastic sponges are made out of a plastic called melamine that is “thermoset” and can’t be melted down, rendering them unrecyclable. But, even if a sponge is made out of a recyclable plastic, any presence of food scraps or organic material will render it unrecyclable (aka any sponge that has been used to clean food off of dishes).

When plastic sponges (and generally, most plastics) are inevitably sent to the landfill or end up in the ocean, they can emit formaldehyde and carcinogenic dioxins as they break down, or turn into pesky and harmful microplastics.

Recycled plastic is always better than virgin plastic, but there are better options out there; these sponges will still contribute to landfill waste or break down into microplastics in the ocean once they’re done scrubbing.

Cellulose is a material made from biodegradable wood fiber and is an effective, inexpensive option for sponge-making. If you have a home or community compost system, you can even cut your cellulose sponges into small pieces and throw them in the mix (as long as they’re not drenched in fats or oils). If you don’t, you can throw them into the trash knowing that they will not contribute to plastic landfill or ocean waste. The only catch is that when cellulose sponges biodegrade in landfills, the lack of oxygen in the landfill environments causes them to emit methane (a super-potent greenhouse gas) as they break down. The benefits outweigh the drawbacks here, but it’s good to understand the full story.

If you are buying cellulose sponges, make sure they don’t contain any plastic pieces or polyester filling. If they’re not 100% cellulose, they won’t be biodegradable or compostable, no matter how hard they try. Try to avoid buying cellulose sponges that are bleached or colored. That bright white or pink sponge probably has some nasty chemicals in it even if it’s made of cellulose.

If you’re able to spend a bit more on sponges, loofahs are the way to go. A few of us here at Finch have put them through the wringer and find them to be super effective. In case you’re thinking about the loofah in your shower, we mean this not this. The great thing about them is that they are literally just slices of a dried-out plant. No sus production process, no nasty bleaches and chemicals. If you live in the right climate, you can even grow them. When they’re worn down, just throw them in your home or community compost bin as long as they’re not drenched in fats or oils. But, the same story applies about methane being released if they end up in landfill.

Ah yes, the OG sponge. Sea sponges have been used for a very long time (like, the Ancient Greeks and Romans used them). They’re very soft, luxurious, absorbent, and as you might guess, expensive. Some people assume that because of the price tag, they’re also “sustainable”...but, not so much. In fact, sea sponges are in danger of being over-harvested and scientists are pretty worried about it. Sea sponges are a primary food source for a type of endangered sea turtle and since they’re already threatened by sewage discharge and commercial trawling (whereby fishing vessels drag heavy nets across the seafloor, snatching up anything and everything in their path), harvesting them for use in our bathtubs just seems unnecessary.

As a rule of thumb, the best way to reduce plastic waste and the presence of chemicals in your kitchen and bathroom is to choose natural-looking sponges made out of 100% cellulose or other plant-based materials (like loofah). That bright white sponge? Definitely bleached. That super-well-advertised but also super-synthetic-looking sponge? For sure made of plastic. In our mind, cellulose and loofah sponges are easy and effective alternatives to that classic plastic sponge. This is one of those times where a “sustainable” aesthetic actually does line up with the science. Win-win.