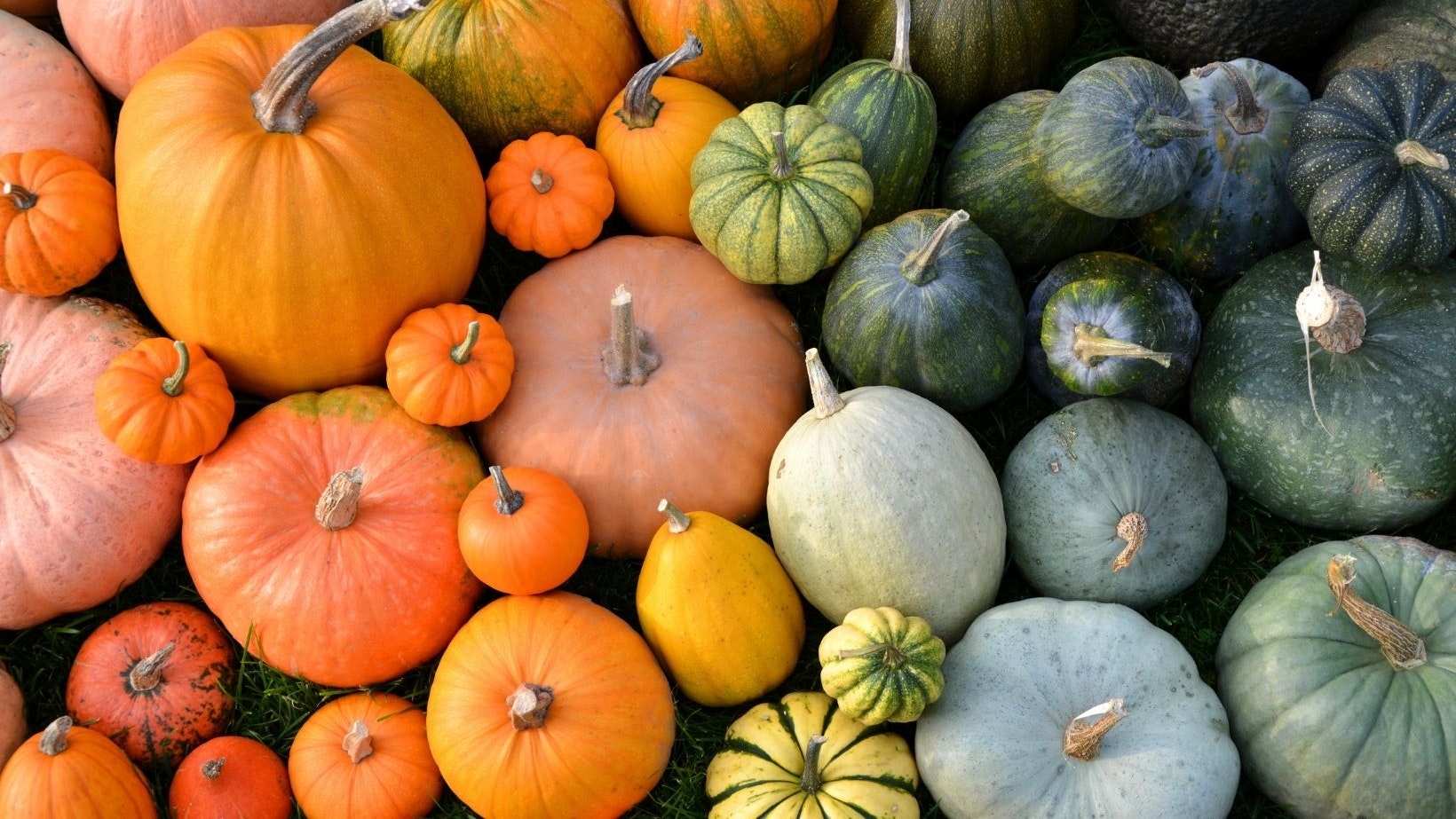 It’s (almost) pumpkin season. When the pools close, the kids are back in school, and the weather gets a little cooler, we expect those Halloween pop-up shops to appear and Fall’s spookiest decor to take over. All of those decorations — including pumpkins, squash cornucopia, and festive costumes for the night itself — can add up pretty quickly. The total spending on Halloween by Americans last year was roughly $8 billion, with the average person spending $92.12. In fact, 95% of Americans will likely go out and buy candy for Halloween.

After that crisp $100 is spent and those pop-up stores are transformed back to their rest-of-the-year selves, all of the pumpkins, stretched-out cobwebs, and last year’s masks (no, not the N95s) end up...somewhere. Unfortunately, that somewhere is often the landfill. From jack-o-lanterns to pleather costumes, the way we celebrate Halloween makes a lot of waste. Unfortunately, those time-consuming DIY projects that your neighbor seems to whip up without ending up on Nailed It! aren’t necessarily a solution for the fast-fashion costumes and the pounds of pumpkin and plastic.

Whether you’re on board for spooky season or still mourning the summer, let’s look at a few ways to reduce waste this Halloween across decor, costumes, and candy.

There’s always one home on the block that’s the absolute best for trick-or-treating. The decor is always on point, transforming it into a witchy wonderland with intricately carved pumpkins and bales of hay. But when the time of Halloween comes and goes, what should we do with our smooshy, droopy pumpkins? 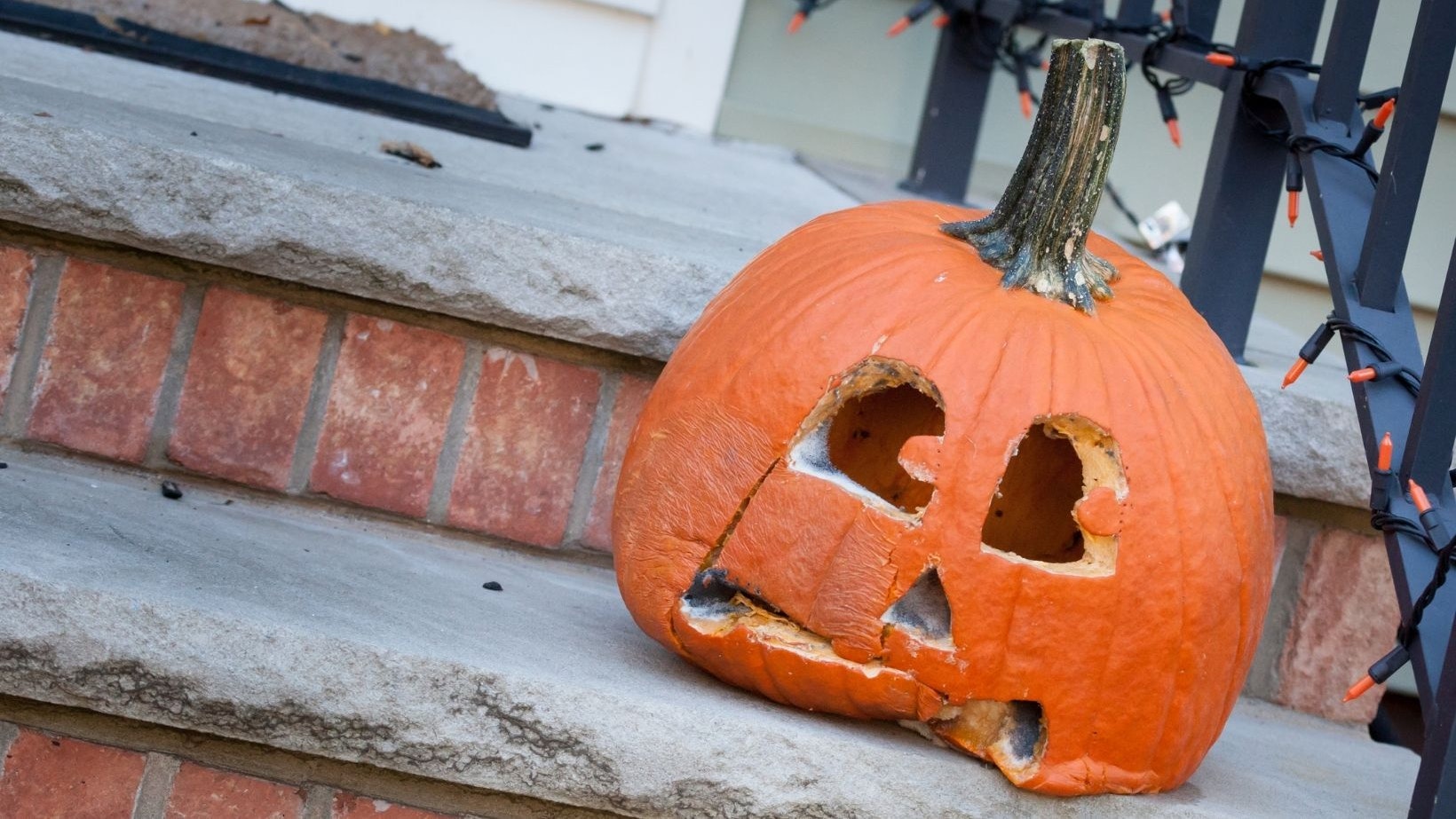 The quick thought you might be having is that it must be better to use a real pumpkin for decor, rather than an inflatable black cat or giant spider made of plastic… but while we’re avoiding plastic, we’re still creating waste. Annually, more than 1 billion pounds of pumpkin get thrown away and end up in landfills. These gourds add up to about 2% of the US’s annual 30.3 million tons of food waste. According to the US Department of Energy, organic materials that end up in landfills decompose and eventually emit methane, which has 28 times the warming effect of CO2 on the planet. The silver lining? Organic materials, like pumpkins, can be composted to mitigate this methane production. So, if you have a pumpkin decaying on your front stoop, it would probably do us all a solid if it gets added to food scrap collection or composted before getting trampled by those rowdy neighborhood kids. Composting pumpkins instead of landfilling them can reduce greenhouse gas emissions by roughly 86%, according to an Italian study from 2009. Don’t have access to a nearby composting service? We’ve got more treats for you to stash. 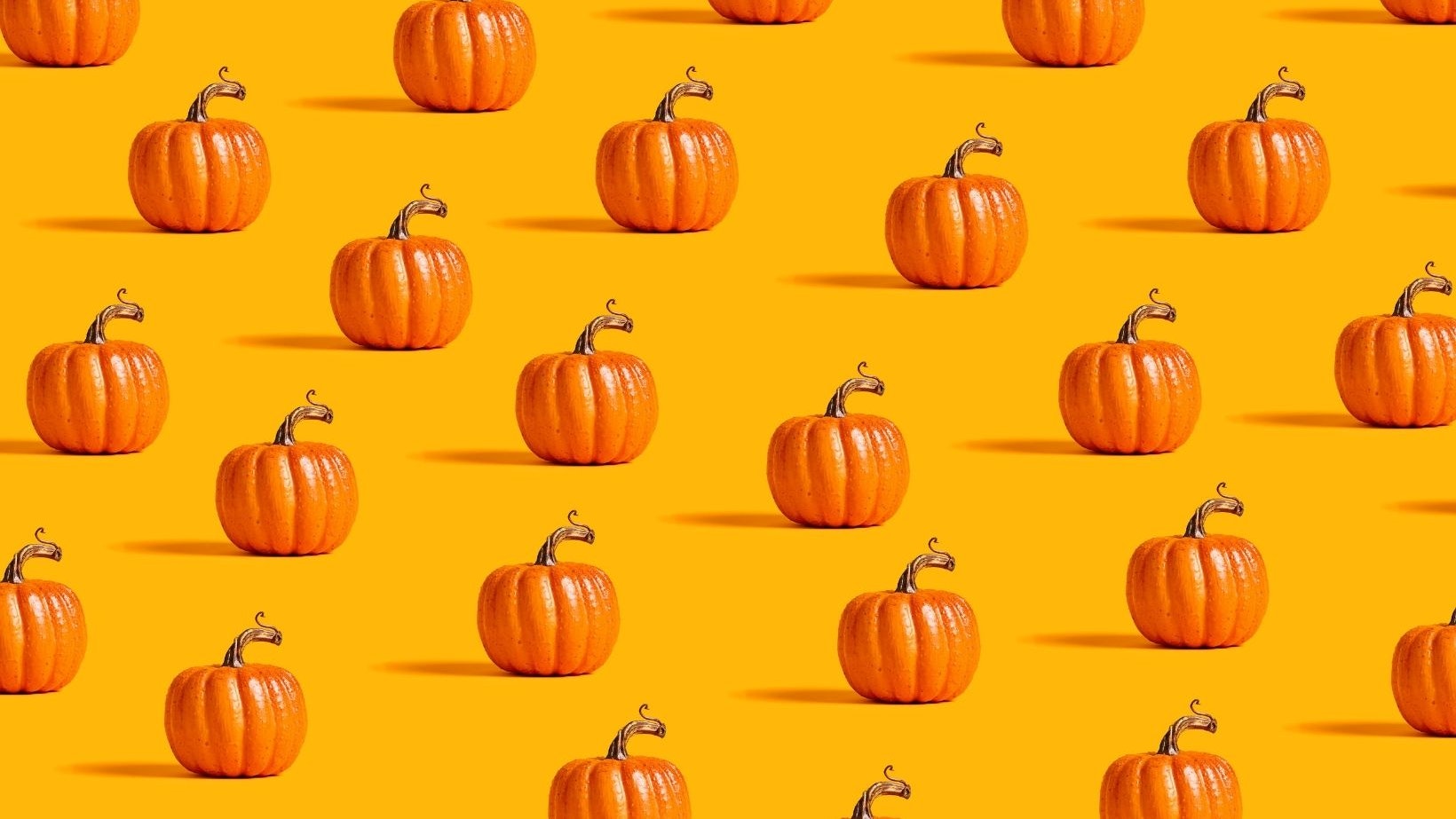 Real pumpkins need to be bought new annually, but plastic and other materials have some perks — namely, they are reusable (if you have a place to store them). Hobbycraft, the UK-based craft retailer, has observed an increase in the sale of ceramic or paper mache pumpkins. While sales of Halloween decorations increased by 15% in 2019 from 2018, paper mache and ceramic pumpkins increased by 24%. But, which material makes decor with the lowest carbon footprint? 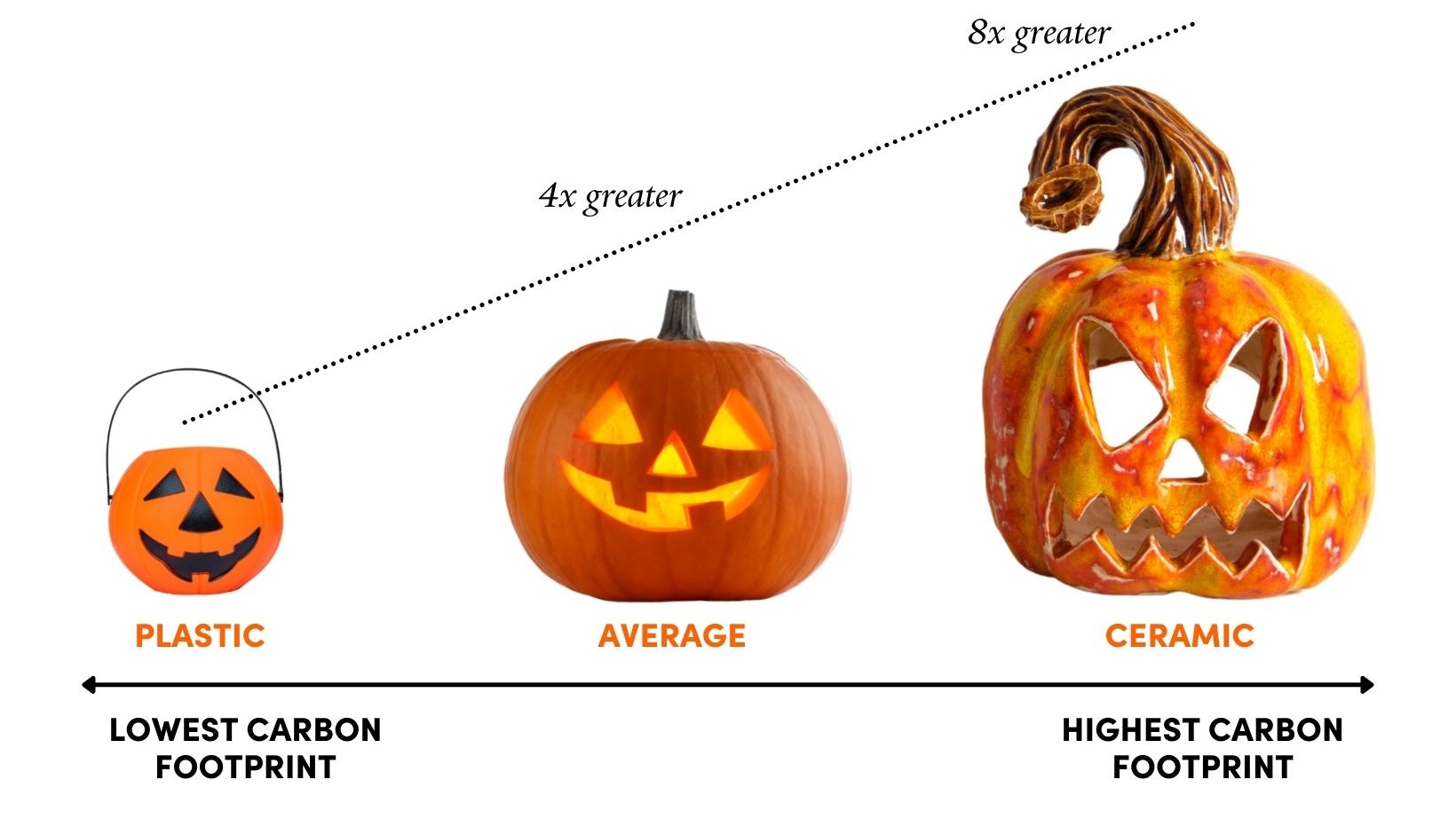 The inside scoop (sans seeds)

Long story short, reusable plastic has a different environmental impact than single-use plastic and when choosing what kind of pumpkin to spring for this Halloween, we have to consider how long we will have it, how many times we will use it, and how we’ll dispose of it. Plastic isn’t always the skeleton in the closet that we think it is...

For all of the time we spend thinking about what (or maybe who?) we’re going to be for Halloween, we don’t often spend much time considering the impacts of playing dress-up. From those circa 2000 pink bob wigs to your baby cousin’s very cute Batman costume, we’re looking at a lot of plastic. Did you know that almost 83% of materials used to create Halloween costumes are plastic? In the UK alone, more than 2,000 tons of plastic waste are created each year from costumes being tossed in the trash. The most common plastic used to make costumes is polyester, accounting for 69% of all the materials. Ready for the horrific plot twist? On average, only 25% of Halloween costumes (including those polyester pieces) are worn more than once. Where are those costumes going, if they’re not taking up closet space? 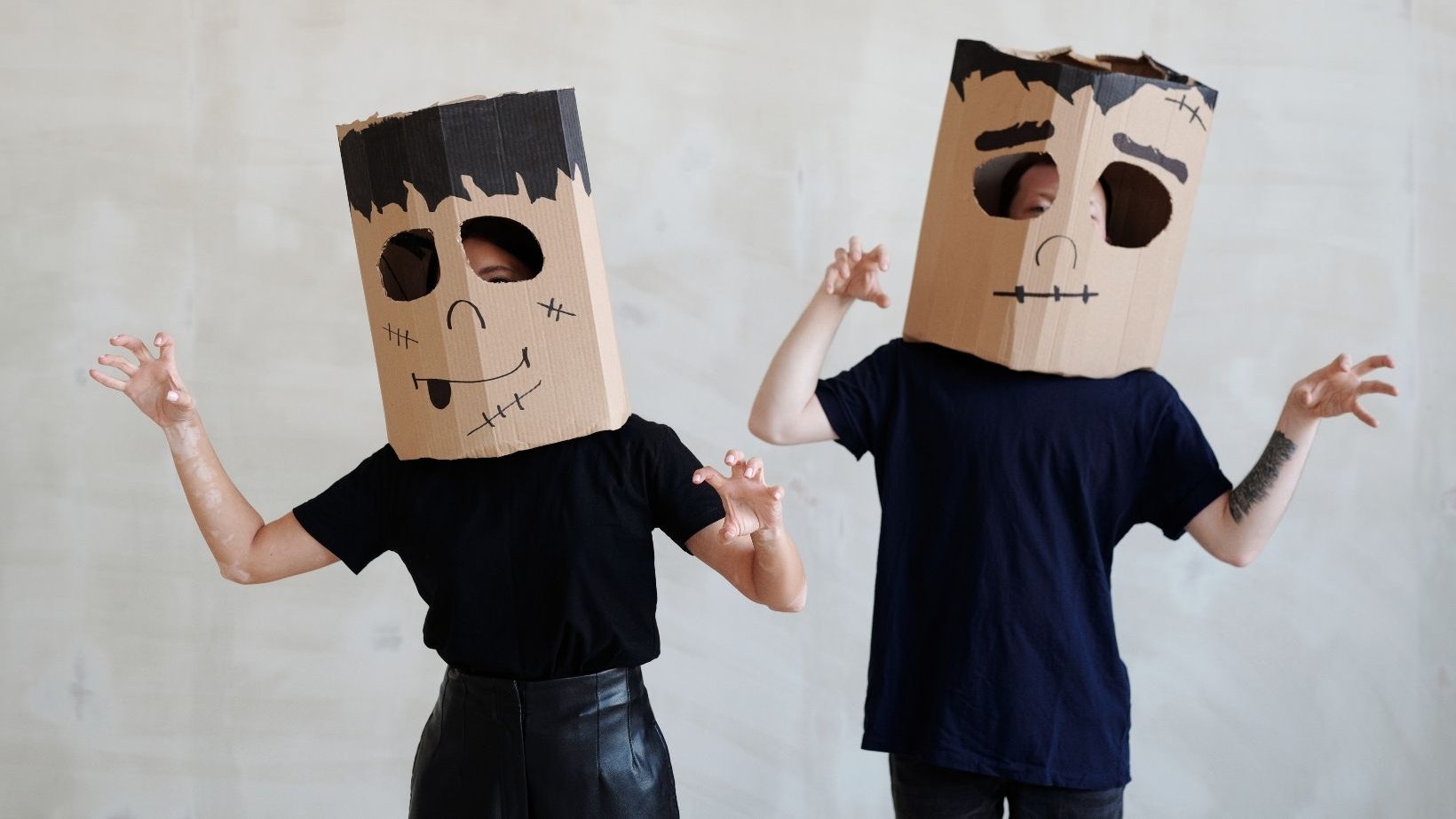 3. Mask up for COVID, but maybe not for Halloween

While polyester is the primary suspect in costumes, the most common material used for costume masks is latex. Synthetic latex is intentionally durable to keep that Freddy Krueger mask in tip-top shape for years. But just like trends come and go in fast fashion, the culture around costumes is to be on trend with current pop culture and switch it up every year. When we combine a throwaway culture with the durability of latex, we’re creating a lot of waste that will stick around in landfills for a very long time. 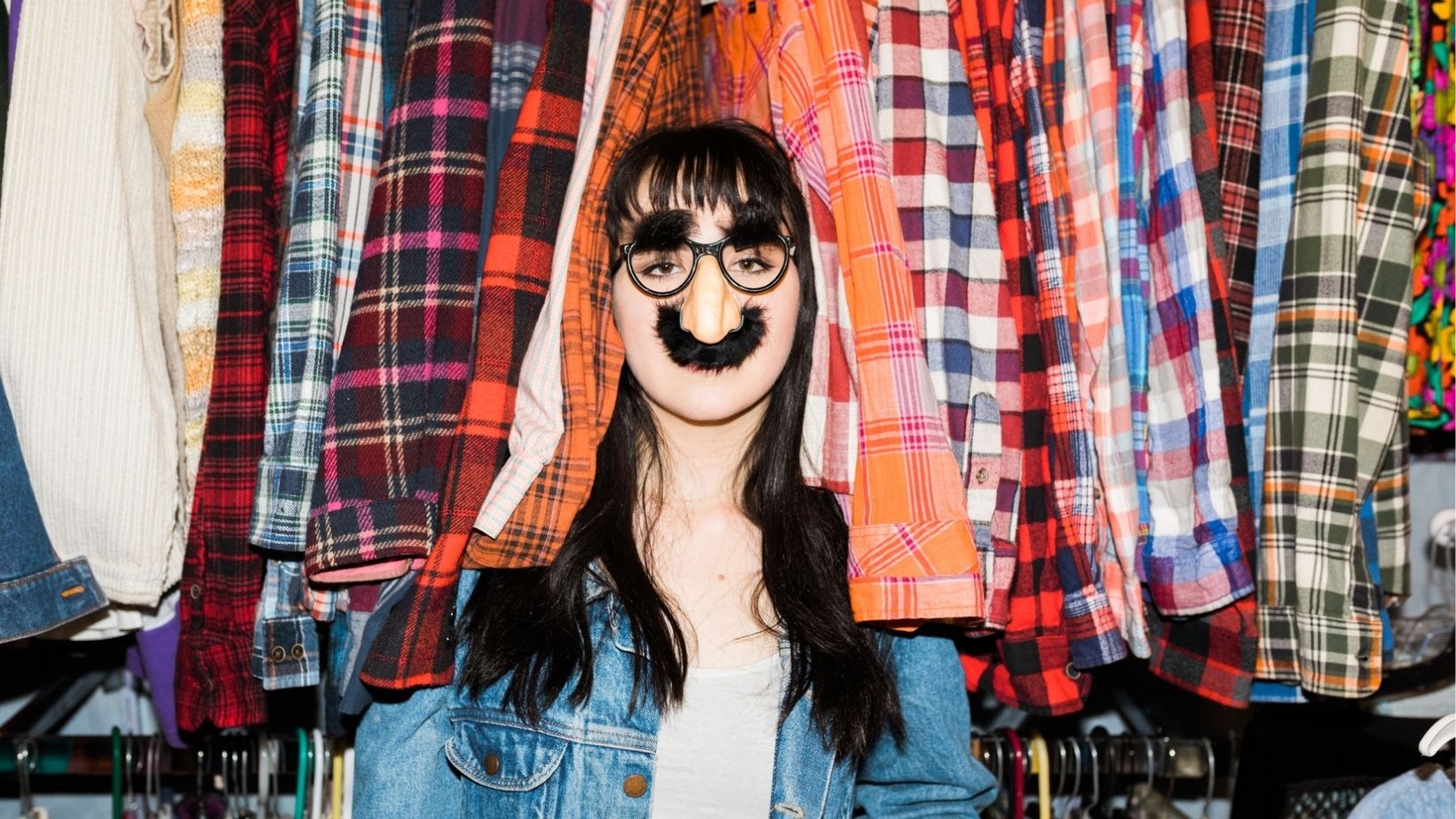 In a survey from the National Retail Federation, 67% of participants responded that they planned to buy costumes for Halloween. We’ve talked about polyester and latex, but it’s time to talk about the energy tradeoffs of textile materials. While a switch from a polyester costume to a cotton one could cut our energy footprint by 25% (woo!), it may actually increase our water footprint by roughly 9 times. We always try to make decisions using the most reliable, science-backed information available, but sometimes these tradeoffs require a judgment call. 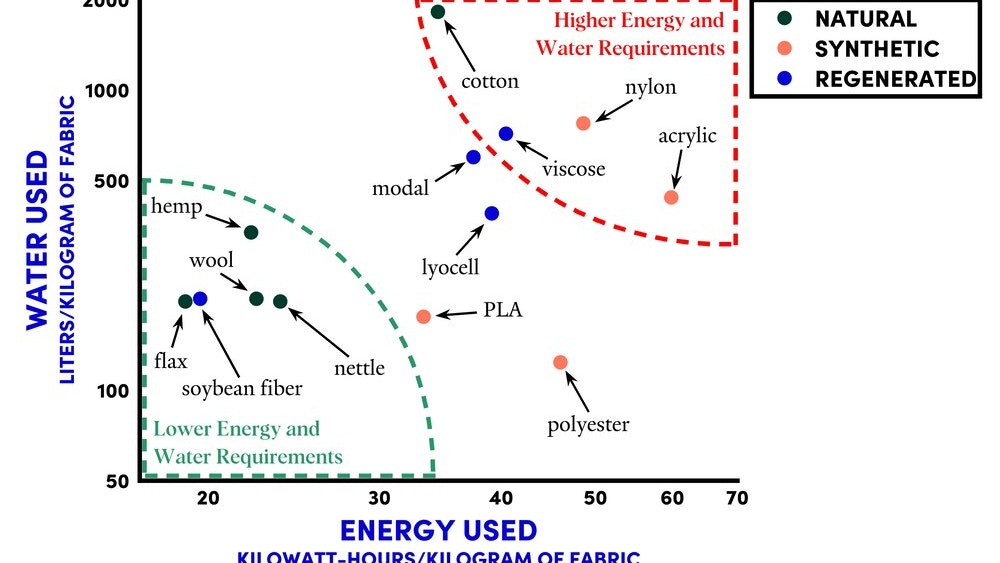 While buying non-plastic costumes may be a great way to reduce our carbon footprint, it may be more expensive, less accessible, and potentially more water intensive. Check out the chart above, which plots out the water and energy footprints of fabrics, if you want help choosing the best option for you. On the other hand, there’s always the option to reuse those old polyester costumes and save on both energy AND water. No one remembers that you were a cat in 2015. We promise.

The key takeaway? Remember that lowering the carbon footprint of an item doesn’t inherently mean that item is good for the environment overall.

We all know that M&Ms are the all-time favorite Halloween candy. But, like those individual fun-sized chocolate bars, they come in single-use plastic wrappers. In 2019, Americans bought 600 million pounds of Halloween candy and, of the top ten most consumed brands, eight are wrapped in plastic. Is this a scary necessity? COVID is still a very serious reality that poses safety concerns around offering children unwrapped candies, so individually wrapped candies are probably the safest option. 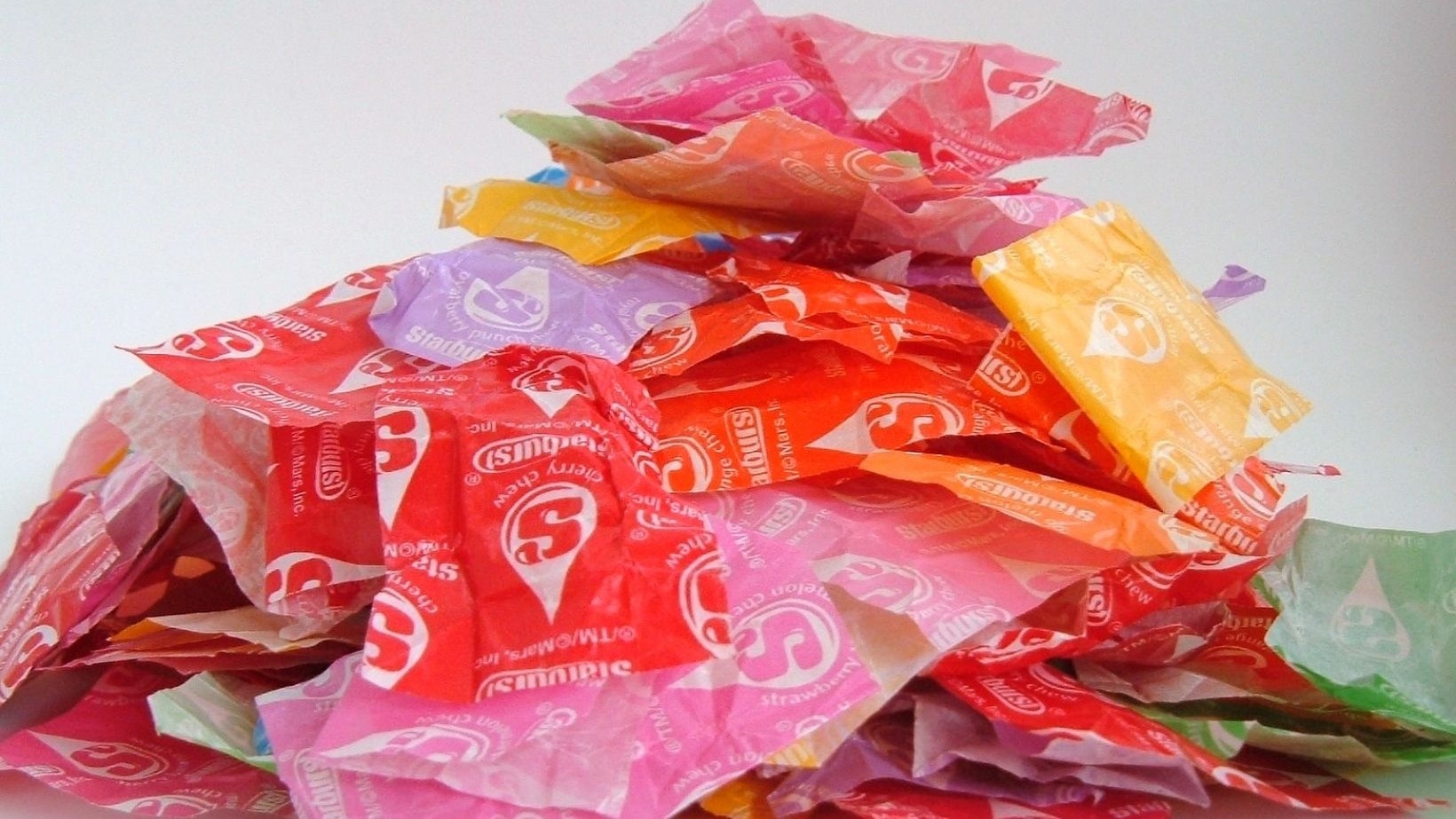 No one likes the neighbor who offers granola bars or fruit to trick-or-treaters. Fortunately, not all candy wrappers are created equal. Check out the list below for some helpful explanations of the different kinds of individually wrapped candy wrappers and always recycle based on your local facility’s capabilities. If an item isn’t collected with curbside pickup, check out Terracycle, the company tackling the otherwise unrecyclable.

A SEASON OF SCARIES

There’s a lot of spooky fun to be had on Halloween with horror movies, frightening costumes, and corn mazes at dusk. The relief comes, though, when you know those scares aren’t real. What is real, though, is the impact of single-use plastic, landfills releasing more methane, and neighborhood pranks going a little too far and causing real damage. But the more we know, the better choices we can make.