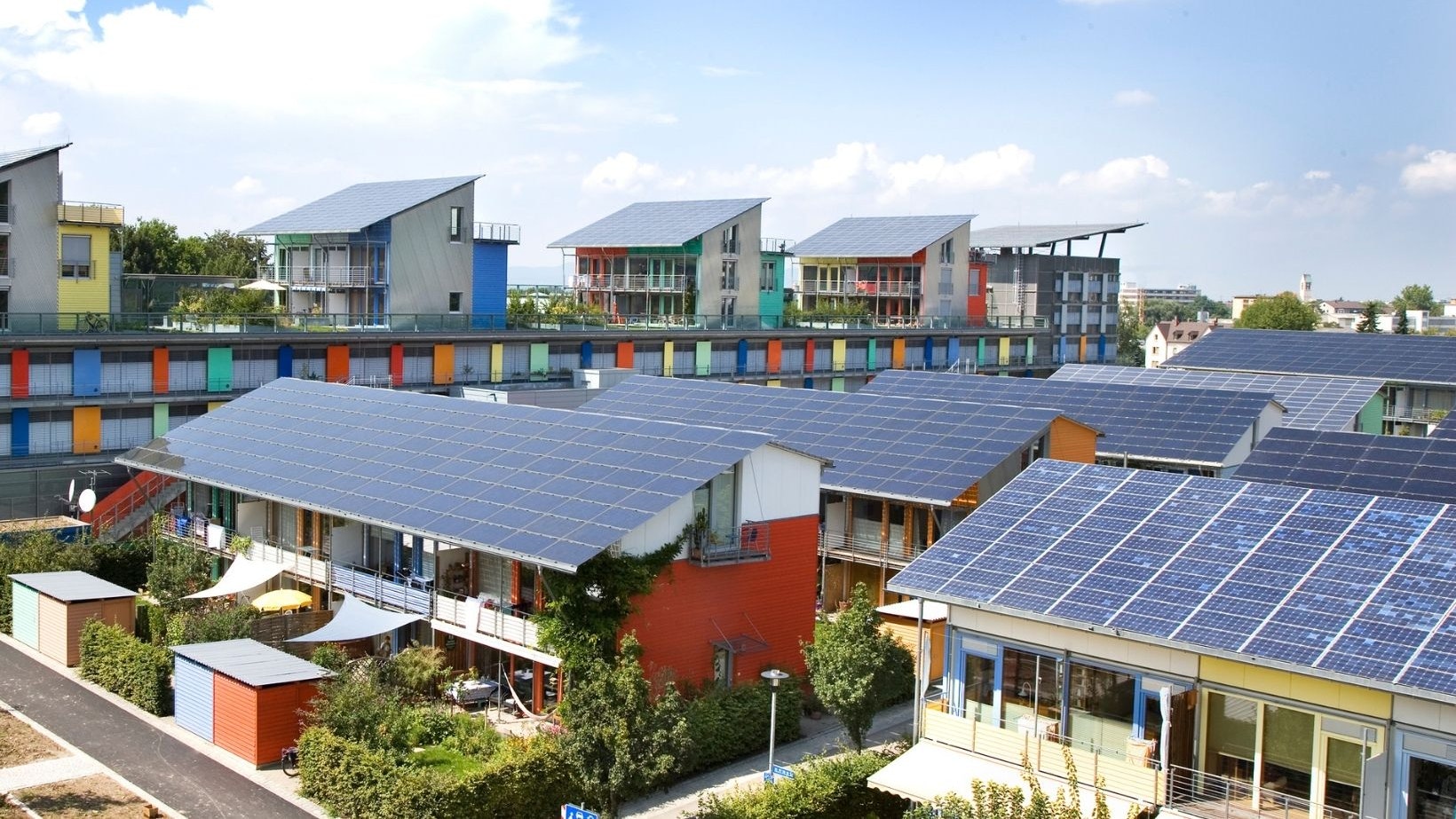 Picture this: it’s summer in a bustling city, you’re walking down the street, feet hitting the pavement, no trees in sight except for the few jutting up along the sidewalk. It’s the kind of sweltering you only get in the concrete jungle. The sun is beating down, and as you round the corner, you encounter an expansive, reflective, shining oasis… a community solar plot.

What is this collection of solar panels doing here? Who owns it? What does photovoltaics actually mean and why does it sound like a dirty word!? (Ok, to be fair, solar plots are rarely around the corner, but allow us to continue…)

Let’s look directly into the sun of solar (but not like Donald Trump and the eclipse). Why is community solar so cool, and what is still preventing us from unlocking the expansive benefits of renewable energy (and, of course, who the ‘us’ is in this question)?

How does sunlight end up running the refrigerator or help flick on a lamp, you ask? Great question! The sun produces a lot of heat and, thanks to your high school physics class, heat = energy. That solar energy is absorbed by photovoltaics, or PV, which converts sunlight into electricity. This is a kind of renewable energy, or energy that comes from sources that are naturally replenished. Of all the energy used in the United States, 12% comes from renewable sources, 11% of which comes from solar energy.

Here’s the not-so-bright part. Roughly 69% of our energy grid is reliant on petroleum and natural gas. In 2019, the burning of fossil fuels accounted for 92% of anthropogenic CO2e emissions, which is a fancy way of saying the emissions that are specifically caused by human activity. But, fear not, using renewables means the reduction of non-renewables like fossil fuels, which are the largest source of carbon dioxide emissions in the United States.

To transition away from our heavy dependency on fossil fuels, we have to consider the regional variations of the grid, which is essentially as obscure as the cloud. According to WattTime, a nonprofit sitting at the intersection of renewable energy and technology, a solar project in West Virginia would reduce emissions by as much as three times a project of the same scale in California - just because of the differences in the electrical grids. If you need a refresher on what energy grids look like, look back to the Lonely Star State. We need to ramp up our use of low-carbon energy sources, and one way to do that is through exciting innovations in renewable energy and, in particular, our use and application of solar energy. Without further ado, enter community solar.

WHAT IS COMMUNITY SOLAR?

‘Community solar’ really rolls off the tongue...but what actually is community solar? Community solar, most simply put, is a collection of solar panels and facilities shared by folks, all respectively receiving credit towards their energy bills for their share of the power produced. The collection, or farm, produces electricity, which is then sent to the grid, and subscribers get credits on their monthly utility bills for that energy. Sounds like a no-brainer, right? When we get a little more into the weeds of community solar, it gets marginally more complex.

Community solar projects are typically offered under subscription models. In the subscription model, community members do not technically own any component of the project, but they get access to renewable energy and savings. Because they don’t own the system, participants are not eligible for incentives like tax credits or rebates.

And arguably the most exciting part of solar? The savings. Google’s Project Sunroof gives estimates on savings with solar energy. You can plug in your address and see what you’d be able to save if you had rooftop solar. Washington, D.C.? $35,000. Columbus, Ohio? $4,000. Redwood City, California? $14,000. Savings range and while rooftop solar and community solar savings aren’t exactly the same, when people opt into community solar programs, savings off of typical electricity bills range from 5-15%.

You may be thinking to yourself, the sun shines basically everywhere, except, maybe Forks, Washington (anyone remember how literally all of Twilight was...rainy?) While this may be true, access to solar infrastructure can be a little tricky. 50-75% of U.S. consumers don’t have access to conventional rooftop installations, largely because they rent or live in multi-tenant buildings. These tens of millions of Americans don’t have ownership rights to their roof, making it impossible for them to generate solar on their own property. Not to mention, even if these people did have rooftops, not all rooftops are sunny or structurally sound enough to support the weight of a system of PV panels.

One of the biggest challenges facing access to residential rooftop solar, for example, is the requirement of an exceptionally high FICO score, which is known to be rooted in the intersections of basically all the -isms: racism, sexism, gender binarism, and classism. Some residential solar developers require excellent FICO scores, above 650, sometimes even 700, which poses an explicit barrier to low-to-moderate income folks. These scores, upon which solar contracts are predicated, are often an inaccurate predictor of whether a subscriber will follow through with their contracted payments.

Requiring an extremely high FICO score is only one of the exclusionary practices seen in the energy sector. A recent study showed a significant disparity of rooftop solar panels in Black and Hispanic (Latine) majority census tracts. The researchers found that this was partially a result of differences in household income, homeownership, and other factors related to systemic injustice.

Unsurprisingly, these lower-income households, often in communities of color, bear disproportionate energy cost burdens. An energy burden is the percentage of the total household income spent on energy costs. These households often spend three times more than other, higher-income white homes. Inequities in the energy sector are also seen in the relationship between environmental and social impact - these lower-income households, experiencing higher energy burdens, are often at a greater risk for respiratory diseases and increased stress.

At Finch, we look at access through the lens of one of our key ranking metrics, or attributes, “Buying It.” We think of this as the accessibility of goods and how much you have to shell out to bring it home. We don’t think of solar energy as just a nice-to-have, but also a way to decouple sustainability and status. We think access to renewables, and the savings that come with access to renewable projects should be standardized no matter who you are or where you live.

As the domestic rooftop solar industry grows rapidly, at a rate of roughly 50% per year since 2012, it’s integral to ensure that this growth is inclusive. Equitable energy access can help to address these inequities, and this isn’t anything new. Polls indicate that Americans strongly support transitioning to ‘clean’ or renewable sources of energy, specifically because it will benefit their communities.

The community solar movement is spearheaded by women of color disrupting the majority-white solar industry through entrepreneurship. Putting new faces to this white-washed industry means a redistribution of climate health and wealth. Take, for example, Kristal Hansley, the founder of WeSolar, who is the first Black woman in the United States to run a community solar company aimed at making solar accessible. Or, for example, the NAACP’s Solar Equity Initiative, bringing solar to marginalized communities. Community solar puts under-resourced communities in the driver seat, reimagines what solar looks like, and revolutionizes the ‘us’ in the question of energy equity.

Environmental justice dictates that those that are experiencing the brunt of the social impacts of nonrenewables, namely lower-income, often Black or Latine, folks, should be centered in conversations around the implementation of energy and energy efficiency. This means making sure that renewables, like solar energy, are accessible, affordable, and commonplace in these marginalized communities. We’re talking community solar, baby!

WHAT DOES ALL OF THIS MEAN?

If you’re not on the edge of your seat yet, well, we’re not sure what will get you there...to us, community solar is super exciting. It’s an illustration of the possibilities that accessible renewable energy and community-oriented projects can bring for community building, prosperity, and environmental celebration.

And there are a lot of awesome organizations working to make sure these communities have access, through policy or external advocacy. Blocpower works towards building electrification in disadvantaged communities, saving customers 20-70% on annual energy costs. Inclusive Prosperity Capital provides the funding for solar energy projects in low-to-moderate-income communities, even further streamlining the access to community solar. But, arguably, the thing most central to access are the policies legislators can implement to make community solar development possible, especially in states with more regulated markets where community solar isn’t even an option yet.

Community solar breaks down the barriers to the expansive benefits of harnessing the sun’s energy. By democratizing energy and ending energy oppression, we’re gaining momentum towards a very bright future.