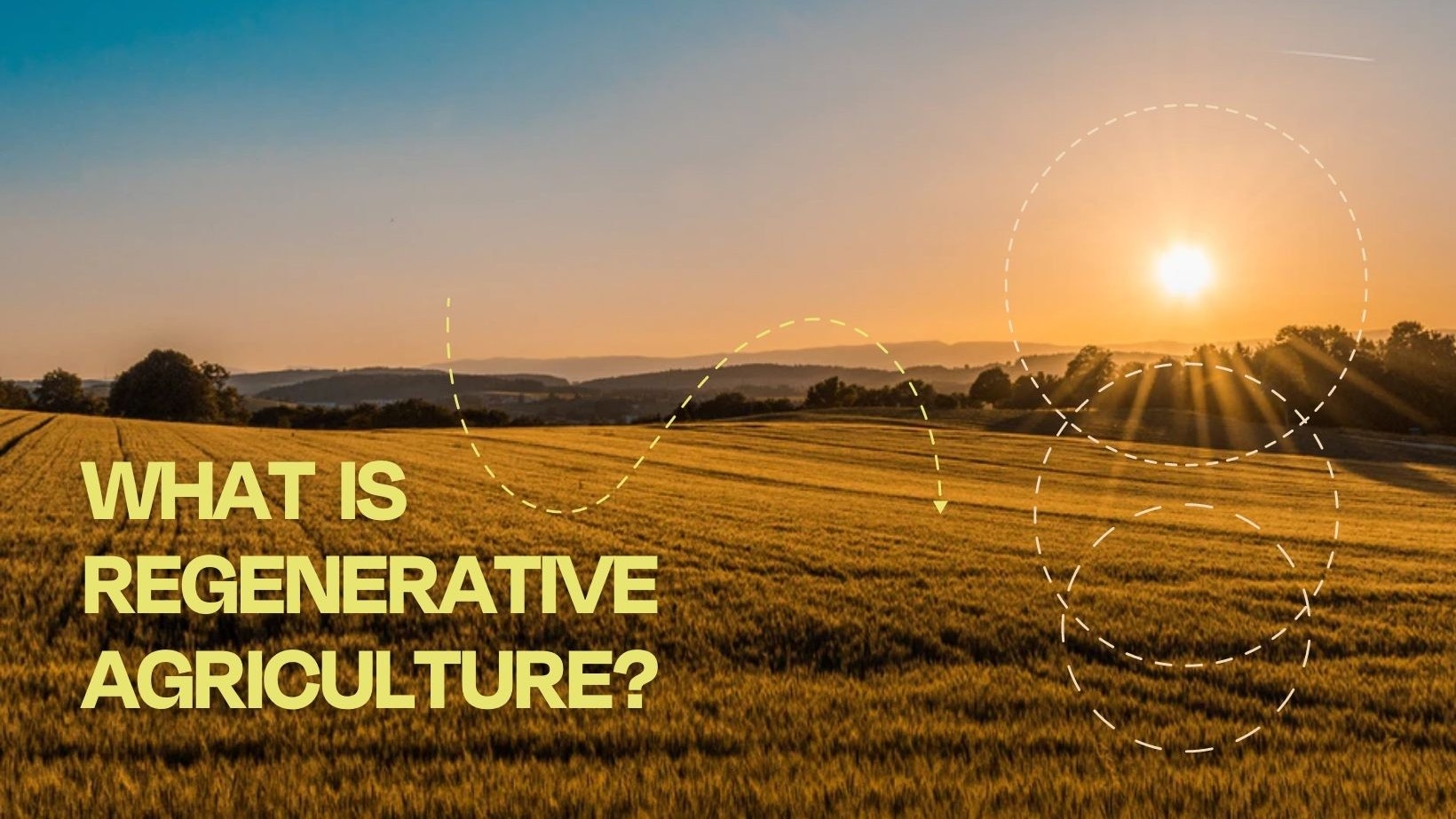 We always keep an eye out for that interesting category of what’s considered sustainable and also trendy. The popularity of organic foods or the hypervigilance towards ocean plastics are both prime examples. Buying organic means reducing pesticides, which is great for people and the planet, but what if that mango is being flown from halfway across the world? Or, when folks cut out straws because #savetheturtles, but still get plastic cups because #easy. The new fad? Regenerative agriculture.

When something sounds so good, it’s really easy to jump on the bandwagon. Let’s investigate the societal return to regenerative agricultural practices and dig a little deeper.

It’s all thanks to the system we use now, known as industrial agriculture, or the large-scale production of crops. Large-scale production lowers costs for both farmers and consumers, increasing access and helping us move towards global food security. We have genetically modified crops to create hybrids that grow in much shorter periods of time, increasing yield and, in turn, profitability. We have cheaper and more effective pesticides to curb insects and other pests that harm crops. We've seen advancements in the transporting, processing, and storing methods of products, illustrated in mechanized farm power that favors machines over horses.

Ideally, these changes would make it so that there are sufficient resources to support the exponentially growing population with fuel, food, and textiles. Ah, the wonders of the modern world...right?

Before we intervened with industrialization we practiced regenerative agriculture, which is basically the farm-to-table version of farming. These management strategies are a form of biomimicry, finding solutions to challenges -- in this instance farming -- through designs found in nature. They differ from place to place, culture to culture, but always conserve the integrity of the living and organic parts of an ecosystem. Regenerative agriculture is self-nourishing, and actually reverses the impact extractive agricultural processes (hint: pesticides) can have on the planet.

These practices often have indigenous origins, so we must give credit where credit is due. As the original environmental stewards, indigenous groups identified agricultural practices that would allow for harmony between themselves and the planet. One strategy, known as intercropping, plants crops together by considering how well they will support one another. For example, the Three Sisters, a combination of corn, beans, and squash, were cultivated by the Iroquois, an indigenous confederacy. Growing these three crops simultaneously is a win-win-win situation: the corn stalk creates scaffolding for the beans to grow on, the beans return nitrogen to the soil, and the squash grows vines that prevent weeds from growing. This also sounds pretty good, yea?

To review: on one hand, we have industrial agriculture. On the other, we have regenerative agriculture. Which is better? We wish there was a simple answer, but, as always, the world is not black and white. So, which bandwagon should we be on?

WHERE THE FRUIT DO WE GO FROM HERE?

In recent decades, the agriculture industry has become vertically integrated. Rather than various crops growing in a single farmer’s field, plots typically grow only one type of crop. This practice is known as monocropping. In the same way that we get sick of eating the same salad every day for lunch even though it started out delicious, soil rejects single crop repetition. Monocropping strips the soil of nutrients and renders crops prone to disease. As the soil and plants get weaker, farmers need to use chemical fertilizers and pesticides to ensure plant growth and to protect against pests. Unfortunately, these synthetic chemicals can also be extremely toxic, associated with acute poisoning, long-term chronic illness, waterway pollution from runoff, and so much more.

As for the genetic modification that allows for plants to grow bigger, faster, better, stronger...this practice is dominated by six large agricultural biotechnology companies. Does Monsanto ring a bell, anyone? The Big Six control 63% of the world’s commercial seeds - and these seeds are copyrighted. Unless you own them, you can’t use them. And yes, Monsanto has been known to sue small farmers when their patented seeds, brought over by the wind, are found in neighboring farms. Commercial seeds also infringe upon the Indigenous practice of seed saving, which promotes genetic diversity and strength against pests. Overall, while the value of lab-designed crops is very real, the impacts of genetic modification can be pretty predatory.

Industrial agriculture can feed, clothe, and run the world at the pace of consumption we have now…but not forever. Regenerative agriculture could feed, clothe, and run the world…but not yet. Each of these solutions, independently, cannot solve the problem. When we apply the innovations and technological advances of the conventional industry to regenerative practices, we will see the magic start to happen.

While much of this change is happening at a corporate level, your voice still matters. We can continue to have conversations around exploitative farming practices that can have serious environmental and social consequences. We’re having a dinner party to talk about agriculture, all organic and sans straws. Who’s in?