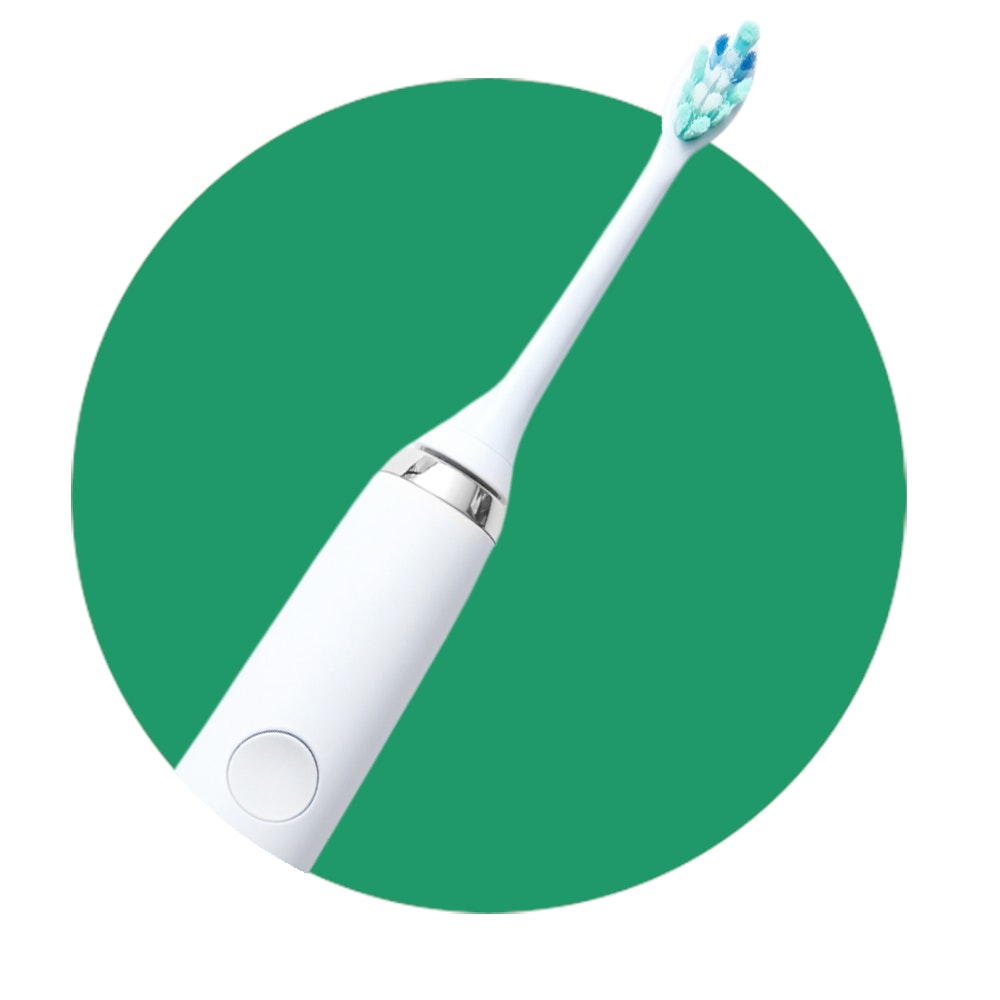 Hey! Now that we’ve gotten your attention with our greenwash-y, SEO-friendly title (thanks, Google), you should know that while there’s no such thing as “eco-friendly” electric toothbrushes, here’s what to be wise on when you’re shopping so you can pick the best option for you, the planet, and the people making your stuff.﻿

First created to help those with disabilities or people with orthodontia, electric toothbrushes have since caught on in the mainstream. It’s estimated that, by 2025, the global electric toothbrush market will reach $1 billion. But before we jump on this electric bandwagon, what do we need to know?

What to Be Wise On:

To be clear, all sustainability facts point against choosing an electric toothbrush. That said, no judgment from us if electric toothbrushes are necessary for your oral hygiene, or if you simply prefer them. The unfortunate truth? Electric toothbrushes have a carbon impact that’s 11 times greater than manual toothbrushes – yep, even those plastic ones. On top of that, the complexity of their plastic and electrical parts means they usually won't be recycled correctly and will probably end up in a landfill.

Check out our top-rated electric toothbrushes

The Factors to Consider:

The difference between electric and manual toothbrushes, while they serve the same purpose, is pretty obvious: electric toothbrushes require a lot more moving parts and materials.

Polyethylene (PE) or polypropylene (PP), petroleum-based and widely-recyclable thermoplastic plastics, are often used for the brush's body, which holds all the electrical and moving parts. PP and PE are the most commonly used plastics in the oral care industry because they are low cost, chemically inert, non-conductive (meaning there are no electric shocks from your brush), flexible, easy to process, and generally recyclable (we all know there’s a big asterisk here based on local infrastructure). The replaceable heads also often consist of a PP or PE body with nylon bristles. Unfortunately, the production of nylon releases nitrous oxide, a powerful greenhouse gas with a warming potential of 265–298 times that of carbon dioxide.

Once separated, all components of an electric toothbrush could hypothetically be recycled. The typical lifetime of the rechargeable batteries (NiMH) used for most electric toothbrushes is 2-5 years. Unfortunately, we haven’t heard of any companies that currently offer toothbrush repair services to replace failed internal parts, so these parts are going to go to waste eventually. That means if the toothbrush isn't recycled properly, it'll contribute to the growing steam of e-waste, 6.92 million tons of which were produced in the United States alone in 2021. According to Oral B, brush heads should be swapped out every 3-4 months per the American Dental Association. Fortunately, some companies offer recycling programs where you can send in your old brush heads. If you’re trying to reduce your oral hygiene carbon footprint, using a manufacturer recycling program is your best bet. Or, you know, go the manual toothbrush route.

This may come as a surprise, but compared to the energy and waste produced during manufacturing, the environmental impact of the actual charging and powering of electric toothbrushes is relatively low. At a rate of 8-12W for 5 minutes a day, the annual electrical usage is 0.3kWh. To put that into perspective, it is about 2% of the electricity you'd use powering a blow dryer or 0.35% of the electricity required to power a wifi router annually. Count that in the win column!

If you're set on using an electric toothbrush, already have one, or need one for personal reasons, consider the manufacturer and if they offer recycling programs. Sharing also can be caring: you can share an electric handle with other folks in your household to reduce the impact of the parts. If you are one of the 55 million Americans a year already using electric toothbrushes, consider switching back to manual when your current one goes kaput. And, if you need one (or just really want one), remember that choosing the right electric toothbrush can help maintain healthy oral habits while also reducing the environmental impact of your brush.

Common Questions We Get:

Can you get eco-friendly electric toothbrushes?

Is my electric toothbrush recyclable?

Probably not. In addition to nylon bristles that aren't recyclable, the complexity of the toothbrush body often means the electronic and plastic parts won’t be recycled by your average recycling facility. According to ADA guidelines, we should replace our toothbrushes every 3 to 4 months. That comes out to one billion toothbrushes nationally or 23 billion brushes worldwide annually that mostly end up in the landfill…or worse, the ocean. If we included the 55 million Americans who use electric toothbrushes in those estimates, we're looking at a lot of mini motor and battery waste.

How can I make my electric toothbrush more sustainable?

Try sharing the electric handle with others in your household by switching removable brush heads to reduce the number of electric grips that need to be owned under your roof.

Are electric toothbrushes better than manual?