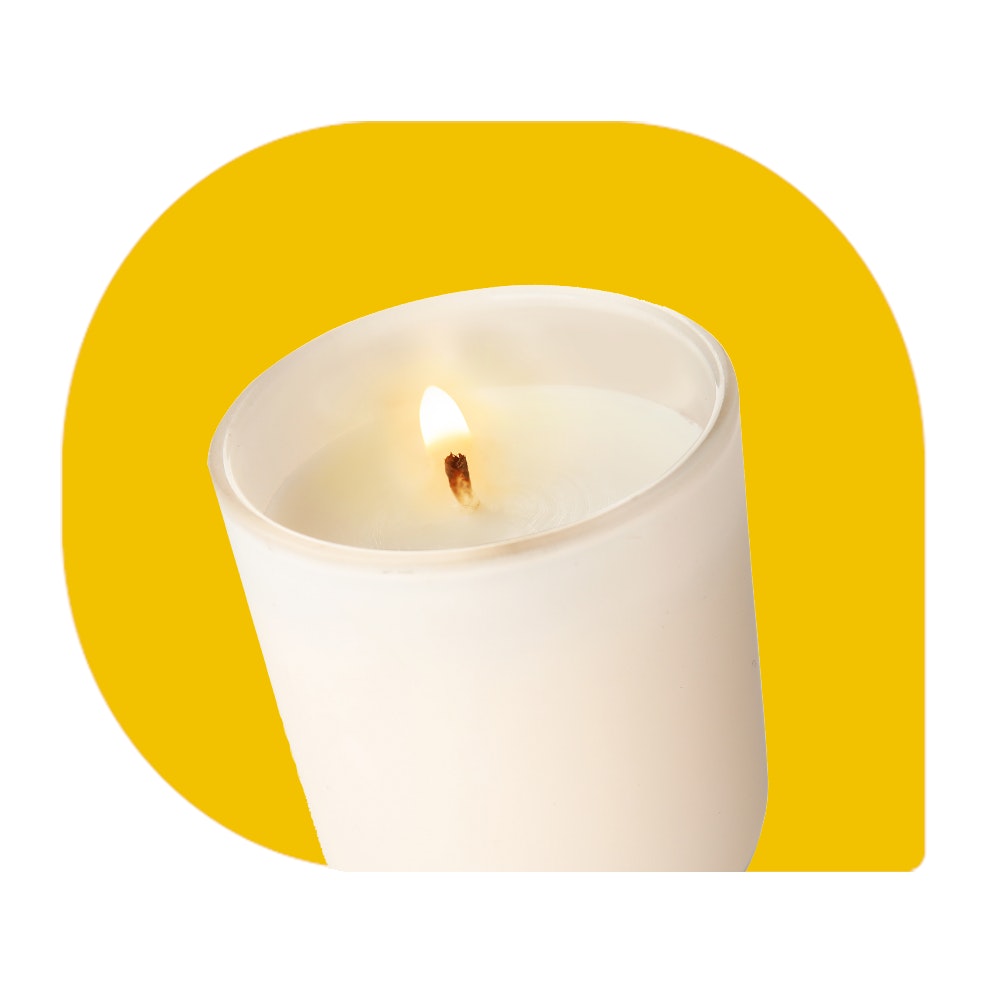 Hey! Now that we’ve gotten your attention with our greenwash-y, SEO-friendly title (thanks, Google), you should know that while there’s no such thing as “eco-friendly” candles, here’s what to be wise on when you’re shopping so you can pick the best option for you, the planet, and the people making your stuff.﻿

The National Candle Association estimates that one billion pounds of wax are used each year to make candles in the U.S. alone. To put this in context, the Palace of the Parliament in Bucharest, Romania weighs 1.6 billion pounds…now that’s a whole lot of candles. Makes sense though, given that the candle industry is a lucrative one, reeling in an estimated $3.1 billion from U.S. retail sales each year. While candles are meant for rest and relaxation, there’s more to know behind that initial flame.

check out our top-rated candles

This may seem like a no-brainer, but the human and planetary impact of candles depends on the materials used to make them. This includes the type of wax used, the wicks we light up, and where the scents we’re sniffing come from.

The factors to consider:

Combustion - AKA Actually Lighting/Burning A Candle

We’ve heard the term “soot” thrown around a lot in regards to candle burning, so before we get into the nitty-gritty of the materials, let’s break that down. In candle burning, soot is formed when the carbon particles deposited from lighting the wick are not consumed by the flame, which occurs in imperfect combustion conditions… which, *hint*, is often the case when we’re lighting candles in our homes. But, we did some digging and you can rest easy. A study from 2011 found that the concentration of soot caused by burning a candle in an average-sized room is about a quarter of the highest level of indoor pollution considered “safe” by the National Institute for Occupational Safety and Health. Phew.

Most standard candles are made with paraffin wax, a wax derived from petroleum byproducts. Petroleum itself is made from crude oil, which, when handled improperly, is often associated with devastating ecological and human health impacts. Petroleum waxes, including paraffin, can also be harmful to marine life when they’re disposed of improperly and end up in the natural environment. When paraffin ends up in our oceans, it can be ingested by our sea-dwelling friends and lead to mass beaching events (i.e. when marine animals wash up on shorelines). To add insult to injury, it can pose health risks to communities tasked with the clean-up and disposal of the wax. Not to mention, by purchasing paraffin candles, we’re inadvertently supporting the crude oil industry – talk about unintended consequences.

On to soy-based candles… Hydrogenated soybean oil is used to make soy wax candles, so don’t let the “natural” idea of a soy plant fool you. Since the 1950s, global soybean production has increased by more than 15 times, and, when unregulated, soybean production has been associated with massive deforestation and the displacement of local and Indigenous communities in Brazil and Argentina. No, thanks. We also need to use a careful eye when looking at “soy” candles because many are made with a combination of soy and paraffin – or paraffin can be used in the production process. All that said, 100% soy candles emit 50 to 60 times less concentration of particulate matter emissions (i.e. soot and dust) than paraffin wax candles, so there is an upside to soy over paraffin.

Ok, so paraffin and soy are putting a damper on our relaxation vibes. How about this beeswax trend? Beeswax is the oldest known raw material for candles and can be USDA-certified organic. While it’s a renewable resource, it is also naturally limited by the size and scale of bee production. Beeswax candles actually burn longer than their paraffin brethren, making more bang for your buck and they don’t require any additional fragrance. All hail the bees! Keep in mind: bees are an all-powerful pollinator that keep our food systems in action, so shoot for beeswax candles that have a Certified Organic seal of approval to help protect our buzzing buddies.

Want one more helpful note on wax? When picking out a candle, keep in mind that a recent study found that the formaldehyde found in most soy and beeswax candles was similar or slightly higher than that of paraffin wax. High exposure to formaldehyde is associated with adverse health effects – but the levels produced by candles (unless you’re doing it up like that one scene from Carrie) shouldn’t pose a serious risk.

The wick is considered the soul of the candle, affecting how fast it melts and how long it burns. Yes, wicks are tiny, but those containing lead were linked to cases of lead poisoning, especially in children. Good thing that, in 2003, the U.S. Consumer Product Safety Commission (CPSC) ruled to ban the sale, manufacture, and import of candles with lead wicks. If your candle’s birthdate is after the release of Oops!.. I Did It Again, you’re okay when it comes to lead poisoning by candle. Let that baby burn.

We have some unfortunate news for the scented candle fiends out there…the burning of scented candles inside can release a large number of toxic chemicals, including phthalates. Phthalates are a group of chemicals often found in fragrances that have been found to cause adverse health effects. Many candle fragrances are developed from a moshpit of chemicals derived from crude oil (friendly reminder: crude oil = derived from fossil fuels = contributes to climate change) that work together to create that nuanced aroma of Pumpkin Spice Latte we all know and love. While being #basic is not a bad thing, and scented candles are proven to play a role in the physiological effects of mood, stress, and anxiety, we think there’s an important distinction to make when picking out those scented candles.

Our general rule of thumb? If a candle smells like it is crafted from sources that are cooked up in a lab, maybe opt out. If its fragrance is derived from fresh herbs or materials that have not been altered in a lab, the likelihood is higher that it will have fewer downsides for the environment.

First, check to see if your candle container is made from glass or tin. Then, check with your local facility for how to properly dispose of the container. Before you recycle those containers though, make sure to clean them out by pouring boiling water into the container so that the leftover wax rises to the top, then scooping it out. While wax may feel a bit like plastic, it’s not recyclable (not to say that all plastic is recyclable though). Once your candle container is wax-free and squeaky clean, it’s ready to go into the recycling – if your town says it’s ok.

If your self-care practice just isn’t complete without your favorite candle, opt for an unscented beeswax candle. Not all beeswax is created equal, though, so look for USDA-certified beeswax. To minimize soot, look for candles with a spherical shape to allow for more complete combustion. Keep an eye out for MADE SAFE®-certified candles, a certification that makes sure that your product doesn’t contain ingredients known or suspected to cause human health harm. As for when you’re done with your candle, reuse the jar as a drinking glass, succulent holder, or container for a homemade candle.

Common questions we get:

“How much wax is used to make candles?”

Let’s check out the numbers. The National Candle Association estimates that one billion pounds of wax are used each year to make candles in the U.S. alone. An average candle uses about eight pounds of wax.

“Are soy candles bad for the environment?”

We don’t live in a black and white world, so binaries like “bad” don’t always encompass the nuances of sustainability and environmental impact. In some ways, yes, as soy production can lead to deforestation and displacement of peoples, but alternatives, like paraffin, are associated with the oil and gas industry. At Finch, we’re all about weighing the pros and cons. In fact, we wrote a blog about it, ​​The Sustainability Paradox: The Pros and Cons of Doing ‘Good’.

“What kind of candles are non-toxic?”

We hate to break it to you, but non-toxic is a buzzword. To be honest, ‘non-toxic’ doesn’t actually mean much of anything. In fact, no chemical or material is purely “non-toxic,” so… no candles are non-toxic. If you want to lessen toxicity, however, opt for unscented candles.

After breathing in those sootless, paraffin-free candle scents, your head will be hitting the pillow in no time. Check out some pillows that are easier on the environment to complement your new candle(s)!