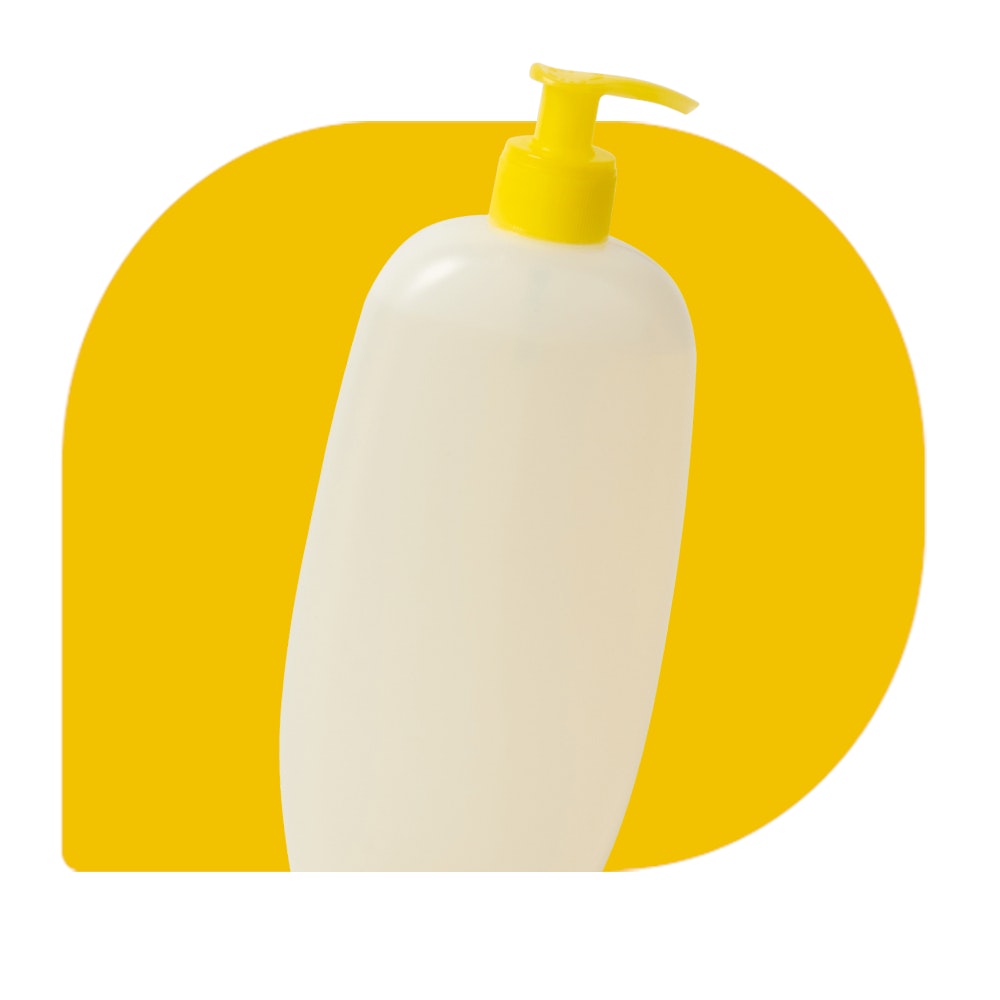 Hey! Now that we’ve gotten your attention with our greenwash-y, SEO-friendly title (thanks, Google), you should know that while there’s no such thing as “eco-friendly” baby bubble bath, here’s what to be wise on when you’re shopping so you can pick the best option for you, the planet, and the people making your stuff.

Your typical baby bubble bath is made up of a slew of chemicals like artificial dyes, fragrances, phthalates, and sodium lauryl sulfate. These chemicals and additives are known to dry out skin, causing irritation and sensitivity. Microplastics, like microbeads, are often added for exfoliation, but when washed down the drain, they end up polluting our oceans and disrupting the digestion of marine animals.

Formaldehyde releasers
Formaldehyde can be found in baby bath soap and is used to give soap that “gentle” feel our tiny ones may love. Unfortunately, formaldehyde is also a known carcinogen and has negative impacts on respiratory health. Increased exposure to formaldehyde can lead to skin, eye, and respiratory irritations in children. Try an alternative, like coconut oil, for all the gentle suds without the negative health impacts.

Sodium lauryl sulfate (SLS) is a “surfactant,” which is used to break down and wash away the dirt and grime that water can’t get rid of on its own. This ingredient forms the suds that makes bathtime so enjoyable, but unfortunately it has not-so-great impacts on our health and planet. Exposure to surfactants can lead to allergies and irritant dermatitis, and studies have shown evidence of harmful brain and nervous system effects, even at low doses. And, when washed down the drain, surfactants can end up in our waterways and oceans, poisoning plants and other aquatic life. Surfactants have estrogenic effects, meaning that they can alter the normal hormonal function of mammals, fishes, and amphibians. Surfactants are also associated with the formation of foams in water, like rivers and effluent treatment plants, which reduces water quality.

An alternative surfactant is coconut oil, which can be used for a gentle, foamy lather. In production, to separate the milk from the oil, a neurotoxin called hexane is sometimes used. Big thumbs down. A study from the International Union for Conservation of Nature found that when compared to palm oil, coconut oil posed a threat to the biodiversity of nearly five times more species per million tons of oil produced. It’s important to note that that widely-cited study looked at small island nations that produce only 8% of the global output of coconut oil, whereas 80% of coconut oil comes from Indonesia, the Philippines, and India. Some say that excluding these small producers would yield a different number. So, take that with a grain of salt and think about the origin of your oil. Coconut oil does lead to some concerns around biodiversity and deforestation, but if you’re in the market for it, opt for a hexane-free option.

Palm oil is prevalent in body washes, soaps, and shampoos. It’s great at helping to remove dirt and oil, and it’s also a great source of vitamin E and antioxidants.

But, it’s not all great. Around 90% of the world’s palm oil trees are grown on just a few islands across Malaysia and Indonesia. As the demand for palm oil-based products expands, so too does the demand for palm oil plantations. That means these areas are disproportionately affected by the problems caused by the rapid expansion of palm oil plantations, including mass deforestation, air pollution from burns to clear vegetation, and the threat of habitat loss for native plants. Worldwide, the production of palm oil is reportedly responsible for 5% of all tropical deforestation. The expansion also leads to increasing land scarcity and higher land prices, which affects the livelihoods of local farmers who can be shut out by bigger corporate growers.

That said, palm oil requires less land than other vegetable oils to produce, so replacing it with another oil can potentially cause greater environmental harm.Animal tallow, for example, is sometimes used as a replacement for vegetable fats and comes with increased carbon emissions from raising and transporting cows, as well as concerns about animal welfare. Plus, it definitely isn’t vegan-friendly.

Some synthetic musks, also known as fragrances, contain phthalates. While they are often included to give bubble bath soap an enjoyable smell, they also have shown to be

hormone disruptors. Phthalates can mimic the body’s natural endocrine system that’s responsible for regulating our reproductive organs, growth, and development. This can lead to genital malformations and testicular cancer in males, and infertility in females. While if the doses of phthalates in fragrances can cause this kind of edocrine disruption is still being researched, for the safest alternative, we suggest going fragrance-free and keeping an eye out for phthalates.

Preservatives
Preservatives are a common ingredient that prevent microbial growth in bubble bath soap. One of the most common preservatives, methylisothiazolinone, can irritate the skin and cause allergic reactions. Lil’ ones with preexisting skin conditions, like babies and children with eczema, are particularly vulnerable because their skin already has a compromised barrier.

When you find yourself needing to clean up a diaper blowout, remember: less is more. When shopping for baby bath soap, look for products that are free from palm oil, SLS, additives, fragrances, microbeads, and preservatives. We recommend looking for those made with hexane-free coconut oil.

“Is bubble bath soap safe for babies?”
The market for bubble bath soap is huuuge. That means that while there are bath soap options out there containing additives that can lead to skin irritation or dryness, there are also alternatives. Choosing a product free from palm oil, SLS, additives, fragrances, microbeads, and preservatives is the safest way to approach bathtime.

“How do you make bubble bath zero waste?”
Chances are, even a “bottle-free” bubble bath will still come wrapped in a form of packaging, and any cleansing agent will result in some waste being washed down the drain. The best way to minimize your waste is by using a microbead-free bar soap.

“Is baby wash biodegradable?”
If a product is biodegradable, it means that it can break down into organic matter, typically in a three-to-six-month window, in the right conditions. If a product contains sulfates or phosphates, it’s not biodegradable regardless of how it’s disposed of. Sometimes, though, what you’re looking for in a “biodegradable” product is that it’s less harmful to the planet. Look for baby bubble bath that is formaldehyde-free, SLS-free, preservative-free, palm oil-free, and fragrance-free, and opt for coconut oil for that gentle, foamy lather.