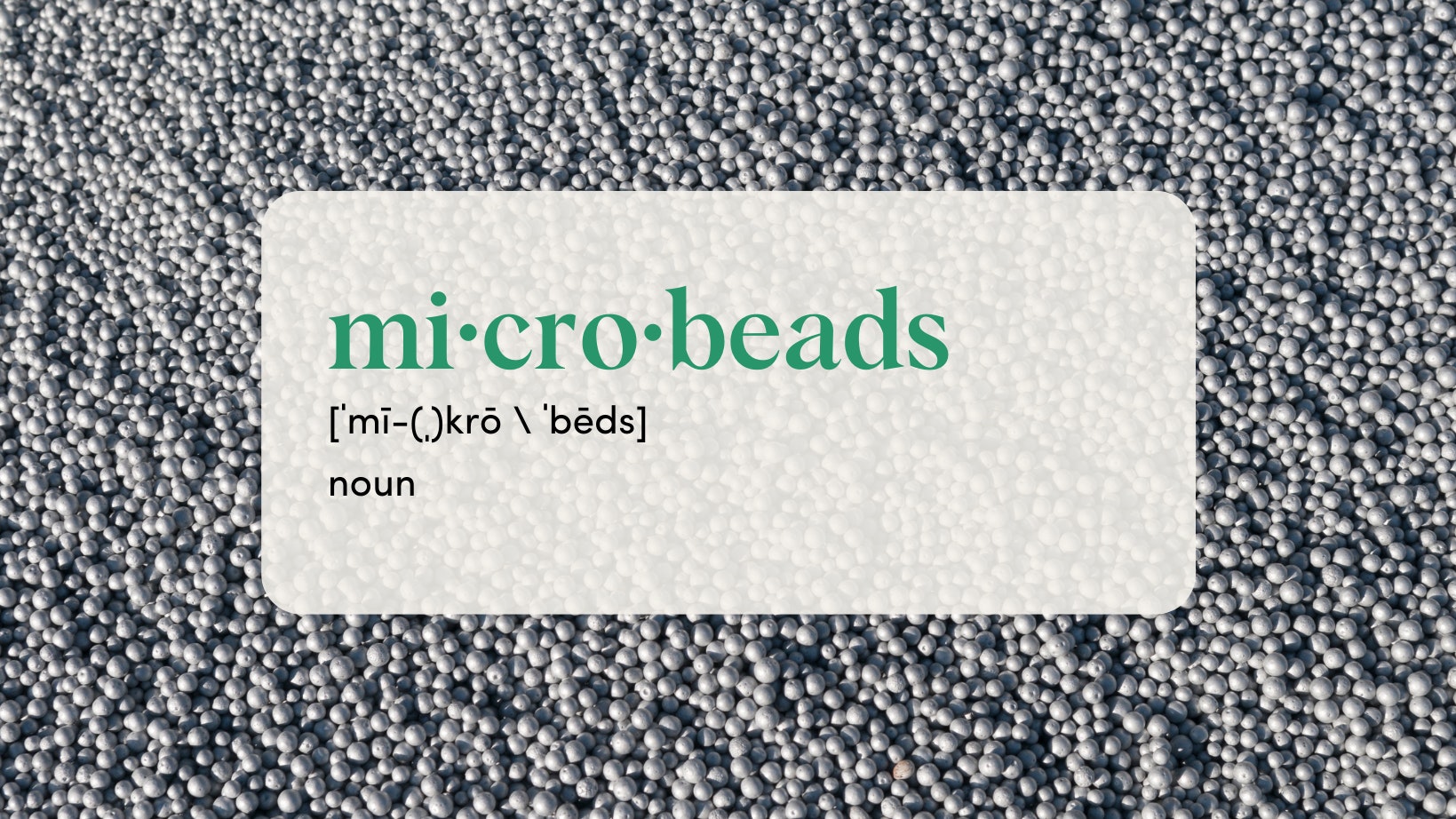 Microbeads are visible particles of plastic that are smaller than 5mm. They are made from synthetic polymers (aka plastics) and are used in hundreds of cosmetic products, often as abrasive scrubbers to replace natural exfoliators such as pumice, oatmeal, and walnut husks. Wastewater treatment facilities aren’t very good at capturing them, which means they often make their way into our waterways and break down into microplastics. Yuck!

Want a hot take?  While it should be of great concern that microbeads are going down our drains, 99% of microbeads are being trapped at wastewater treatment plants, so there may be greater concern elsewhere when it comes to the reasons that microplastics are piling up in our oceans.

Since microbeads are used in cosmetics, they’re designed to be washed down the drain and then passed through wastewater treatment plants (WWTPs) and other treatment facilities. At these WWTPs, tanks separate suspended solids (aka “sludge”) from liquid (aka “effluent”). During this process 95-99.9% of microbeads separate into the sludge, leaving only a small percentage remaining in the effluent. Studies have shown that around 0-7 microbeads are found in a liter of effluent which is often deposited straight into the ocean. Considering how small microbeads are, 0-7 in a liter of water seems relatively insignificant. However, WWTPs in the U.S. have the ability to treat more than 160 trillion liters of water every day. If it were estimated that these facilities operated at half speed (80 trillion liters of water per day) and only 0.1 microbeads were found in each liter of effluent, then that would mean 8 trillion microbeads would be flowing into aquatic environments every day. For reference, this is enough microbeads to cover over 300 tennis courts… per day.

This is bad because microbeads break down into microplastics, which can physically enter the bloodstream, and if they get small enough, they can even penetrate and enter the cells in your body. They can cause cell damage, endocrine disruption, and act as a breeding ground for germs. They also end up polluting the ocean and eventually disrupt the digestion of marine animals.

What kind of products are made with Microbeads?

Microbeads are used as abrasive scrubbers and exfoliators in cosmetic products. They can be found most commonly in toothpaste, facewash, and bodywash, but also in deodorants, lotions, and nail polish. In 2015, Unilever, The Body Shop, IKEA, Target Corporation, L’Oreal, Colgate/Palmolive, Procter & Gamble, and Johnson & Johnson pledged to stop using microbeads in their “rinse-off personal care products.” Today, microbeads have officially been banned from all rinse off products in the United States. However, some companies still produce many products, such as deodorants, lotions, nail polish, and other cleaners that contain microbeads that they don’t consider “rinse-off personal care products” but still end up going down the drain eventually.

The Zero Plastic Inside logo guarantees that the product is made completely free of microbeads and other microplastic ingredients.