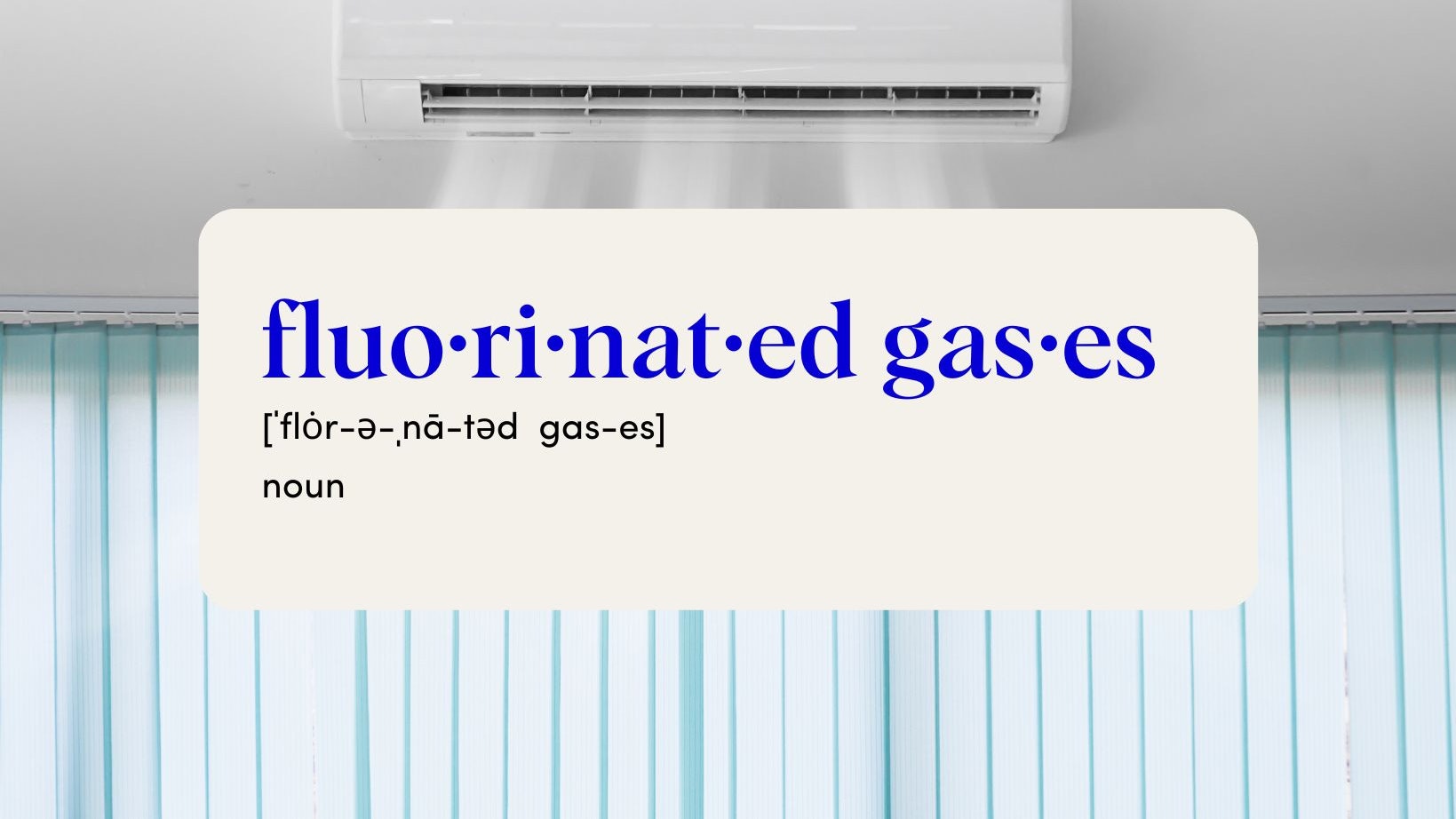 What are Fluorinated Gases?

When we think of greenhouse gas (GHG) emissions, we may immediately think of carbon dioxide and methane, and maybe even nitrous oxide if we’re more “in the know” on climate change. Often missed on the list, however are fluorinated gases, like chlorofluorocarbons and hydrofluorocarbons (aka CFCs and HFCs) – just to name a few. These are gases with incredibly high global warming potentials (GWPs). We’re talking magnitudes of tens of thousands compared to carbon dioxide’s GWP of 1 and methane’s GWP of 25… CFCs and HFCs, in particular, are chemical compounds used as refrigerants in refrigerators, air-conditioning systems, and more.

Want a hot take? ​​Unlike carbon dioxide and methane, which can naturally be emitted from the environment, fluorinated gases are almost entirely the result of human-related activities. Yes, hi, we’re the problem.

…and how about our least favorite fluorinated gas? It’s a toss up. HFCs may have been created as an alternative to CFCs to minimize ozone depletion, but HFCs are still having devastating effects on the atmosphere by absorbing and trapping heat in the lower atmosphere, thereby accelerating the greenhouse gas effect.

While these fluids are beneficial to the functioning of HVAC and refrigeration systems, they can lead to some unfortunate and significant environmental consequences when released into the atmosphere, including contributing to climate change and actively depleting the ozone layer. Sure, while CFCs and HFCs are not directly harmful to human health if they’re used correctly in appliances, they are not good for the environment – we’ll say it again for the folks in the back, CFCs are much more potent greenhouse gases than carbon dioxide. The effects of HFCs are also extremely damaging.

The “good” news is that companies, and we as individuals, can help mitigate the release of fluorinated gases into the atmosphere. A common way that CFCs and HFCs make it into the atmosphere is from improper disposal of air conditioning units. If the unit goes straight to a landfill without the refrigerants being properly disposed of, they will leak out and wreak havoc on the atmosphere. So, just like a lot of the goods we buy, make sure to think about how to get rid of things with refrigerants before tossing them to the curb.

What kind of products are made with CFCs/HFCs?

These gases are further proof that not all innovations are good innovations. CFCs were the original refrigerant in many household and industrial products due to their unique properties, including low toxicity, low flammability, and reasonable cost. Due to the significant environmental damage that they can cause, however, CFCs were banned from production and import to the United States beginning in 1996. In the late 1980s, HFCs were introduced as a potential substitute for CFCs. HFCs add hydrogen atoms to the CFC structure, which minimizes the emission of ozone-depleting chlorine containing compounds into the stratosphere.

Since the production and import of CFCs was banned beginning in 1996, you can be sure that your household is free of them if your appliances were made that year or later. The use of HFCs is gradually being phased out, too, but there are no certifications to look for to avoid these chemicals. A few alternatives that are replacing standard HFCs are natural refrigerants, HFCs with lower global warming potential, hydrofluoroolefins (HFOs), and HFC-HFO blends. As the owner of an appliance containing CFCs or HFCs, the best thing you can do is properly dispose of your stuff so that the refrigerants in your appliances don’t leak out into the atmosphere.