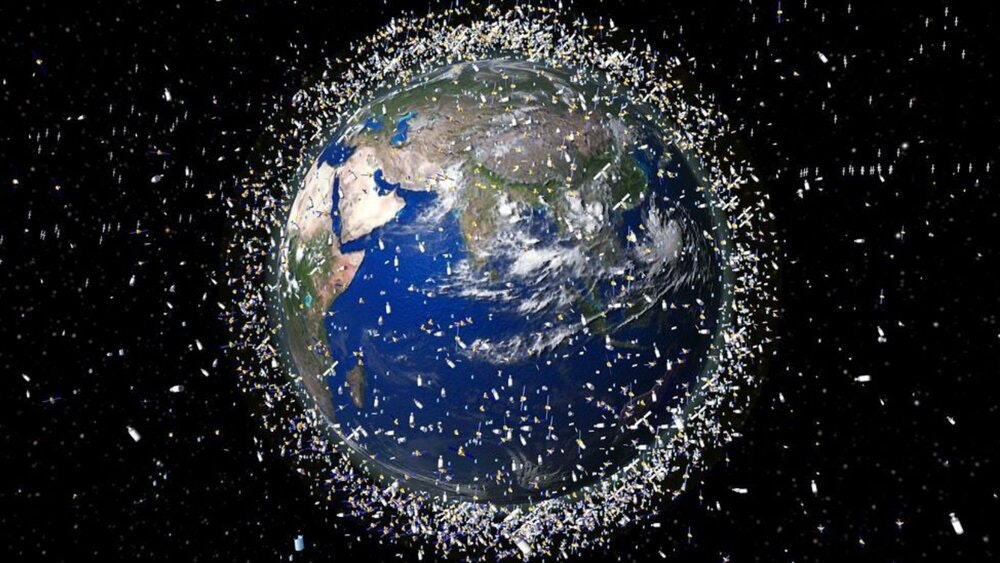 What happens when what goes up does not come down? Orbital debris, or “space junk” happens. You might be wondering… what is orbital debris and why the heck are we talking about it? Well, as we’ve learned time and time again, just because something is far away (in this case hundreds of miles away), does not mean that we are absolved from its impacts.

How does orbital debris come to be?

Since October 4, 1957, when the U.S.S.R. launched the first artificial satellite to orbit Earth (the famous Sputnik), we humans have been sending stuff up into space. As people, satellites, and spacecraft have gone back and forth from Earth to space, junk has been left behind. Think nonfunctional spacecraft, abandoned launch vehicles, defunct satellites, and lost equipment (like a glove, cameras, a wrench, a toothbrush, pliers, a tool bag, and garbage bags). Once that junk enters Earth’s orbit, it’s called orbital debris. To give you an idea of just how much is out there, the Department of Defense’s global Space Surveillance Network (SSN) sensors were tracking more than 27,000 pieces of orbital debris as of May 2021, 23,000 of which are larger than a softball. There are also about half a million pieces of debris the size of a marble or larger, about 100 million pieces of debris about .04 inches (one millimeter) and larger, and even more micrometer-sized (0.000039 inches) debris, all of which are too small to track.

Why does this matter?

Space is huge, right? And compared to the amount of ocean trash we deal with (an estimated 5.25 trillion pieces and counting), a few hundred million pieces of debris floating up there in Earth’s orbit isn’t that bad, right? Ehh… wrong. The problem starts with the fact that these objects move at extremely high speeds of up to 17,500 miles per hour. Even a small piece of debris colliding with a spacecraft or satellite at that speed could cause significant damage, meaning that all that space junk poses a risk for space travel. Millimeter-sized orbital debris currently represents the highest mission-ending risk to most spacecraft operating in low Earth orbit. A number of space shuttle windows have had to be replaced due to collisions with paint flecks. That’s right -- paint flecks, which on Earth seem so harmless, can wreak havoc in space due to the sheer speed at which they travel. Unlike on Earth, trash colliding with trash is another space problem. When pieces of orbital debris collide, it can cause even more damage by creating more and more smaller fragments of debris.

At the end of the day, if the space junk situation gets too bad, it could ultimately render access to space difficult or impossible. While this may mean that certain multi-billionaires currently focused on being space cowboys might shift how they redistribute their funds (pro), it would also seriously hinder scientific exploration (con).

What does this have to do with climate change?

It starts with global cooling. Let’s be clear, global cooling is not the kryptonite to global warming and it is not cool. Basically, while carbon dioxide causes global warming in Earth’s lower atmosphere, it causes the opposite effect, called global cooling, in Earth’s upper atmosphere. The temperature decrease caused by those pesky greenhouse gas emissions leads to a decrease in the density of the upper atmosphere, which lessens its natural pull. Since 2000, it is estimated that the atmosphere 250 miles above Earth’s surface has lost 21% of its density because of rising carbon dioxide levels.

Here’s the problem: The upper atmosphere is where, normally, collisions of molecules cause drag, naturally pulling orbital debris downward into the lower atmosphere where it is incinerated over time. Burn, baby, burn up that space junk. But when the upper atmosphere loses density, that drag becomes weaker, and less space junk is pulled down and incinerated. That’s why space junk and climate change are related… and why changes to the atmosphere caused by carbon dioxide emissions could increase the amount of debris that stays in orbit.

If carbon dioxide levels double by 2100 (which is the worst case scenario according to the Intergovernmental Panel on Climate Change), the atmosphere could lose 80% of its density. That means much of the orbital debris that previously would have been pulled down and incinerated will actually remain in orbit. As a result, the European Conference on Space Debris predicts that if the worst case scenario pans out, the amount of orbital debris could increase 50 times by 2100. Even in the best case scenario (whereby carbon dioxide levels stabilize or reverse), the amount of space junk in Earth’s orbit will likely double. Regardless of what happens, space junk is a problem being made worse by climate change.

There are a number of potential solutions in development, all of which sound straight out of a sci-fi movie. One approach is to “de-orbit” space junk, or knock it out of Earth’s orbit and into Earth’s atmosphere, where it will burn up. This approach involves equipment like giant magnets, harpoons, nets, and a “space whip”. Many nations are also ensuring that future spacecraft contain equipment that will propel them into Earth’s atmosphere to burn once they have reached their end of life. Ultimately, these solutions are necessary to ensure the safety of future space missions. And the good news is that it is highly likely that our space junk will be cleaned up in a matter of years after de-orbiting and debris collection mechanisms are put into place. But our actions down here on earth matter, too.