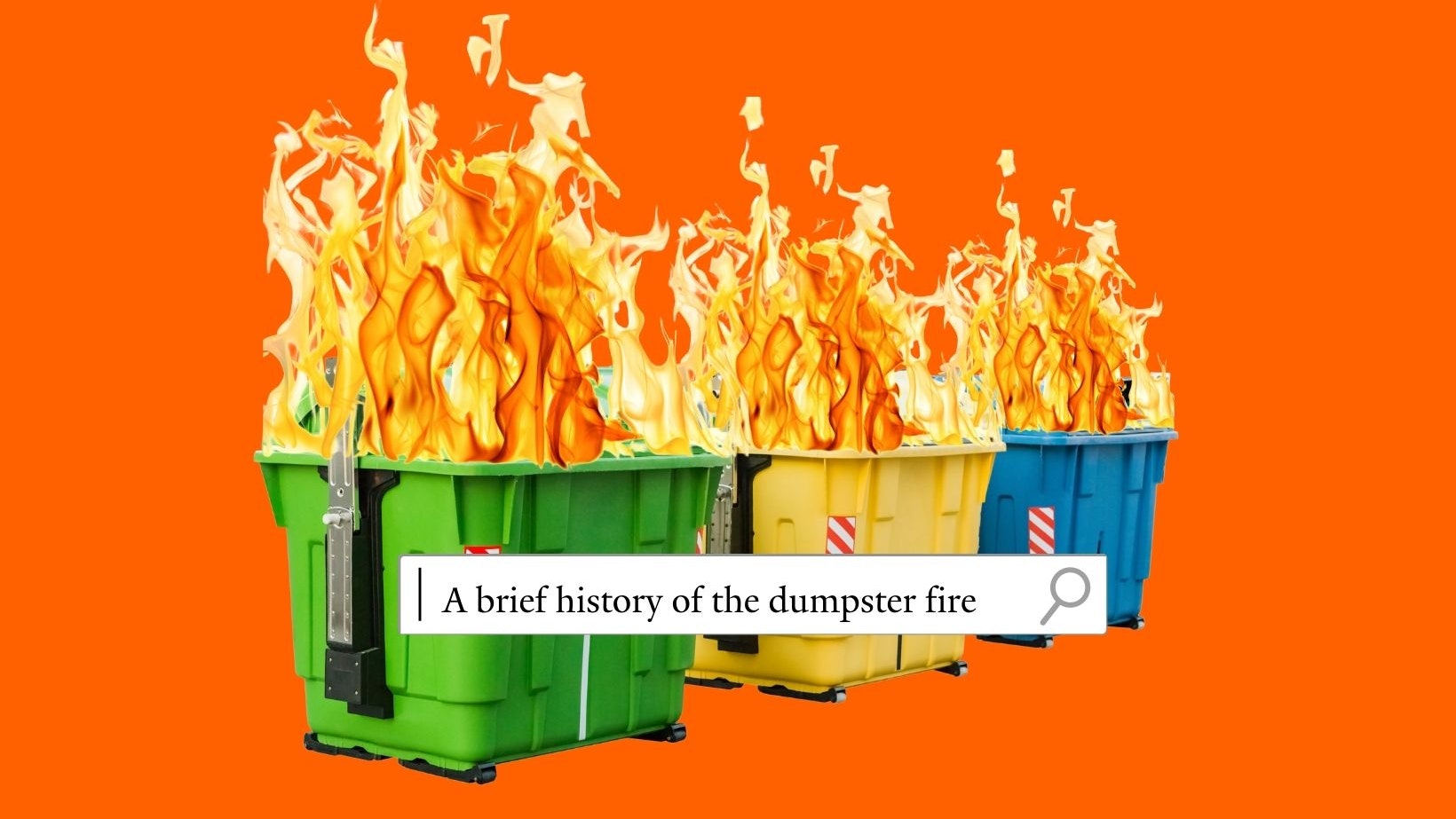 Nearly 8.5 million people live in New York City and if there’s one thing that’s true about New Yorkers -- other than having a lot of opinions about where to get the best bagel -- it’s that New Yorkers produce a lot of trash. We’re talking 12,000 tons of trash per day. As one might imagine, waste management in the city that never sleeps has long been an issue, and solutions for disposal have been less than perfect since the New Amsterdam days. Over the years, we’ve dumped our trash from windows and into the ocean, we’ve burned our trash (literal dumpster-fire style) and shipped it to different states, and we’ve even built neighborhoods on piles of trash.

To give you the most accurate information on waste management in NYC, we’re not going to leave anything out of the bag. Buckle up for the dirty details of NYC’s trashy history. (Too many trash puns or just enough?)

From 1624, when the Dutch settled in present-day Manhattan, to the late 19th century when the Department of Street Cleaning was established, New York City was a hotbed of filth and disease. The absence of a waste management system meant that people could dump their trash on the streets and let their animals (including pigs and horses) roam and defecate wherever they pleased without consequence. It is said that by 1832, the city had such a pungent odor that approaching visitors could smell the stench from 6 miles away, and by the late 19th century, the death rates in New York City were comparable to those of medieval London. So much for our romantic visions of old New York… yikes. Finally, after over two centuries of living in filth, New Yorkers had their sanitation prayers answered when, in 1896, a sanitation engineer named George Waring whipped the Department of Street Cleaning into shape and established the first effective waste management system the city had ever seen. Garbage was removed and sorted, setting the foundation for the waste management that still exists in New York today and taking on a new, less politically-charged meaning of the phrase “cleaning up the city streets.”

As we all know, trash doesn’t just magically evaporate into rainbows and sunshine when it gets whisked out of view...it has all got to go somewhere. In this case, most of Waring’s initial clean-up was dumped into the ocean. Poor George must not have known how problematic this practice is for the environment and for public health. By the 1920s, the Jersey and Long Island shores once known for their pristine beaches were no longer safe for bathers. A quotation pulled from the July 1, 1925 issue of the New York Times tells you more than you probably want to know:

“Last Saturday on one strip of beach 300 yards long on the south shore of Long Island no less than three cats and one dog were cast up within the same hour. They came ashore amid a profusion of grapefruit skins, pineapple tops, cans of shoe polish, bottles and other choice bits of refuse.”

Bathers were understandably disgusted by the stuff washing up on shore and then people started getting sick from the waste. New Jersey eventually got so fed up with the problem that they filed a lawsuit against New York for dumping trash off the coast. And so began the long-lived battle of NJ vs. NY -- Yankees or Mets, hoagies or subs, to dump or not to dump. The New Jersey lawsuit led to a Supreme Court ruling that stated the city of New York had to find an alternative dumping solution by July 1, 1934. Thus began the history of dumpster fires...and the sanctioned burning of New York City’s trash, which still continues to this day.

New York City’s solution to the lawsuit was the development of the Inwood incineration plant on 215th street which opened in late June 1934, just before the Supreme Court’s deadline. Unfortunately, the Inwood plant was not the modern waste management system New Yorkers were hoping for. Just a year and a half after the Inwood plant opened, the City of New York was sued by neighbors of the plant due to the noxious and overwhelming odors emanating from the incinerator. Hello, environmental injustice. Public health crises aside, by the 1960s, New York City was burning about one third of its waste in 22 municipal incinerators and 2,500 apartment building incinerators. These incinerators expelled ash that spread itself all over the city and lingered in the air as smog. People wiped the accumulating ash from their windowsills and watched it as it fell from the air. As told by Jim Dwyer of the New York Times:

“In the 1960s, my playmates and I stopped everything when it began ‘snowing’ ash from incinerated garbage. We chased tiny scraps of partly burned paper that floated in the air as if they were blackened snowflakes.”

Hold the phone. What if kids today were running around in the ash strewn from wildfires building soot-snowmen?! No, thank you. During that same decade, the fastest-growing cause of death in NYC was pulmonary emphysema. A coincidence? Maybe. Perhaps a result of cigarette smoking? Also a possibility. Or maybe the result of living in a city that was literally raining garbage ash? Very plausible. In

1964, New York City had the worst air pollution of any big city in the U.S. And while New York’s air quality is certainly better today, that pollution doesn’t just disappear. In 2001, a study done on the Central Park Lake closely matched the lead in the sediment of the lake with the lead contained in particles from the garbage burned in Manhattan during the 20th century.

Needless to say, New York City’s incinerators, particularly those operated in apartment buildings, posed health risks to residents. Apartment building incinerators had basically no pollution controls and were usually operated by people without training in combustion techniques (such as janitors and supers). Because of the density of Manhattan, there was fear that the fumes coming from apartment buildings were being taken in and circulated throughout the surrounding taller buildings. And those fumes -- made of highly toxic carbon monoxide, benzopyrene, dioxins, and furans -- were being expelled at concentrations up to 1,000 times that of the dioxins and furans coming out of properly managed waste incinerators.

Thankfully, 1970 brought the enactment of the Federal Clean Air Act, which forced the closure of incinerators that failed to meet new emissions standards. That year, the Inwood plant was closed. In 1971, the City Council of New York mandated landlords to either upgrade incinerators to capture toxic particles or shut them down altogether. In 1989, Mayor Ed Koch signed a bill that required incinerators in New York City to shut down within four years, and lo and behold, all incinerators had stopped operations by the end of 1993.

And that was the end of that. No more trash burning…but wait, there’s more!

Throughout its history, New York City also used some of its garbage to expand its footprint. Many of the neighborhoods in lower Manhattan today are literally built on trash. This use of trash has been pretty successful, except for during Hurricane Sandy when Manhattan was reduced to its original size by rising water levels, and thousands of NYC residents were left without power.

Today, most of New York’s 12,000 tons of trash hauled by garbage trucks per day goes to transfer stations, from which it is shipped on barge or train to landfills outside of the city. At the end of the day, about 80% of NYC’s trash is landfill-bound, and 20% ends up at waste-to-energy plants, where it is burned and then converted into energy. Still, New York’s waste management system is far from perfect. On one hand, about one third of residential waste in NYC is compostable, meaning it could be diverted from landfill if properly sorted AND meaning there are a lot of food scraps going to landfills where they emit methane, a potent greenhouse gas that contributes to climate change. There is a huge opportunity for the city to expand a curbside composting system so that those food scraps can be reintegrated into the soil or used to produce energy rather than heading to landfills. On another finger of the same hand, NYC’s recycling program is also broken. Currently, only about one fifth of the city’s garbage is recycled, though the Sanitation Department claims that if everything recyclable were sorted and recycled, nearly 75% of NYC’s trash could be kept out of landfills. We’ll believe it when we see it… A good place to start would be to examine what other cities are doing well. Seattle, for example, offers recycling for free, but charges residents a fee for each bag of non-recyclable trash, which gives residents an incentive to consume less and reuse more. San Francisco diverts about 80% of its trash from landfills by making recycling and composting mandatory for all businesses and residences. It’s time for New York to take similar actions.

On the other hand, trash burning is still very much a thing, New York City has just shifted it beyond the city limits and placed the onus on someone else. Oh, you don’t say? We’ll save our diatribe on the environmental justice issues for another post, but there is a system in play here where wealthier cities often shift their trash burden to economically-disadvantaged, historically-marginalized communities that don’t have the resources to fight back. As New Yorkers, or dwellers in any urban city, ask yourself: Do I know where my trash is going? Do I know how much trash I generate every year? Do I know who is affected by where my trash is burned?