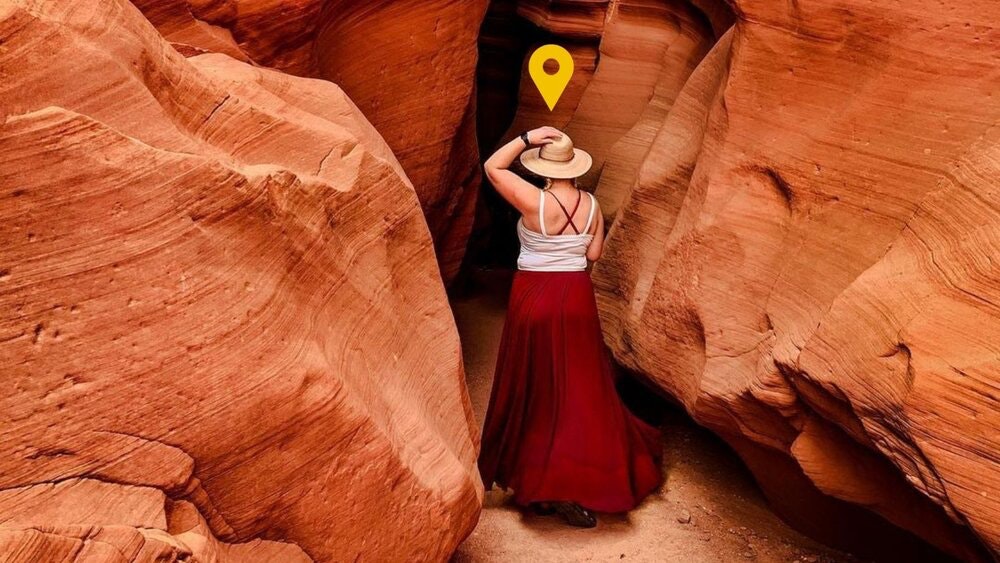 There are some things in life that are so widely enjoyed, people across all different countries and cultures and religions can agree on their fundamental amazingness. Those things can be life-altering events, like the birth of a child. They can also be heartwarming moments, like eating a meal with people you love. Or, they can be simple pursuits like spending time in nature. Turns out, our government agrees that spending time with Mother Nature is just one of those things that everyone should have the ability to do. That’s why, in 1872, Ulysses S. Grant signed into law the Yellowstone National Park Act, which withdrew over two million acres in Montana and Wyoming from settlement, occupancy, or sale to be "dedicated and set apart as a public park or pleasuring-ground for the benefit and enjoyment of the people”. That act marked the beginning of our National Park System, which has grown to encompass 85 million acres (or 3.5%) of the land in the U.S, and is frequently lauded as “America’s best idea”. Yay! Go America. Now, what are you waiting for? Pack up your bags and get out there!

As we know from elementary school history class, every acre of “public land” in America is land that European settlers pried from the hands of Native Americans. When the government “withdrew” those two million acres to create Yellowstone National Park, well, that land wasn’t just sitting there. The Shoshone, Bannock, Crow, Nez Perce, and other peoples who had considered that land home for centuries were suddenly made trespassers of their own land. Today, 26 tribes have ancestral connections to Yellowstone Park land, which is still considered sacred.

The government promised that the tribes would retain hunting rights in the park, which was an important source of food for them. However, by 1900, the government had broken that promise. The tribes that had called the land home for centuries were mercilessly driven out, and the trails of bloodshed left behind were covered up with lies. The government claimed that the Native Americans avoided the area because they were afraid of the geysers, but in reality, the peoples indigenous to that land had actually long used it for hunting and gathering food and medicinal plants. After the park was established in 1872, the Native Americans found themselves sequestered to limited reservation land and government food rations that were insufficient. With an important source of sustenance taken from them, the Native Americans found themselves under constant threat of starvation. When the U.S. Government determined that Yellowstone be "dedicated and set apart as a public park or pleasuring-ground for the benefit and enjoyment of the people”, it clearly meant “for the benefit and enjoyment of the white people”. Under its wild exterior, Yellowstone Park is the scene of a crime perpetrated by white supremacists.

The National Park System was created with the intention of keeping “landscapes unimpaired for future generations while offering recreation opportunities”. For the past 149 years, the government has done a decent job of preserving these landscapes. But who are they to say what is best for this stolen land? Indigenous peoples are historically known to be the most effective stewards of the environment. Indigenous land makes up about 20% of the land on earth, and contains about 80% of the world’s remaining biodiversity. Native Americans have deep spiritual, cultural, social, and economic connections to their land, and it shows in the way they treat it. They believe in respecting all species without compromising their needs. Native Americans consider the 7th generation when designing environmental management actions. When it comes to forest management, community and long-term preservation of forests prevail over individualism and short-term financial gains. Connecting to and respecting the land is an important part of Native American history and culture, and in all likelihood, the task of preserving the land unimpaired is best left to them.

It’s unclear whether the National Park System as it is currently run will ensure “landscapes unimpaired for future generations”. Increasing foot traffic in certain areas of our public lands has put fragile ecosystems in danger, generating a culture of gatekeeping in parts of our National Park System. In this post, we’re going to dig into how our history of settlers privilege has manifested itself today, and how we can best balance accessibility with protection of the land. Hint: social media plays a huge role in this conflict.

In November 2018, the Jackson Hole Travel & Tourism Board asked visitors to stop geotagging photos on social media. Hordes of new hikers had discovered secluded hikes and lakes on Instagram that were previously only known by the lucky few, and locals became concerned with the ecological impacts of the heavy foot traffic. Delta Lake in Grand Teton National Park was hit particularly hard by an influx of visitors; in just two years from August 2016 to August 2018, the number of visitors to Delta Lake increased by 164%. Inexperienced hikers who found Delta Lake through social media geotags were leaving trash, trampling vegetation, and disturbing wildlife. Many were venturing off-trail, creating new pathways and ultimately causing erosion.

The Jackson Hole Travel & Tourism Board sees geotagging as a problem because it allows inexperienced hikers to embark on adventures that they’re unprepared for. With the tap of a finger, anyone can retrieve the coordinates of a secluded lake or hike without understanding what they are getting into. Worst of all are the influencers with large followings who are taking sponsored photos in these locations. Many of the spots in National Parks across the country now well known thanks to geotagging were intended to provide an opportunity for solitude in wilderness. Now, conservationists worry that the ecosystems and animals in many of those areas are in danger due to overuse of the trails. In response, the Board created the “Tag Responsibly, Keep Jackson Hole Wild” campaign, with the purpose of encouraging people to stop and think before they tag a location (and thereby making it more difficult for outsiders to discover certain parts of the National Park). Well, it just so happens that 86% of residents of Jackson Hole are white, 0% are Native American, and the median home value is $652,100. Hmm… a mostly white, mostly wealthy town with an obvious sense of ownership over land that isn’t theirs? Sounds familiar. 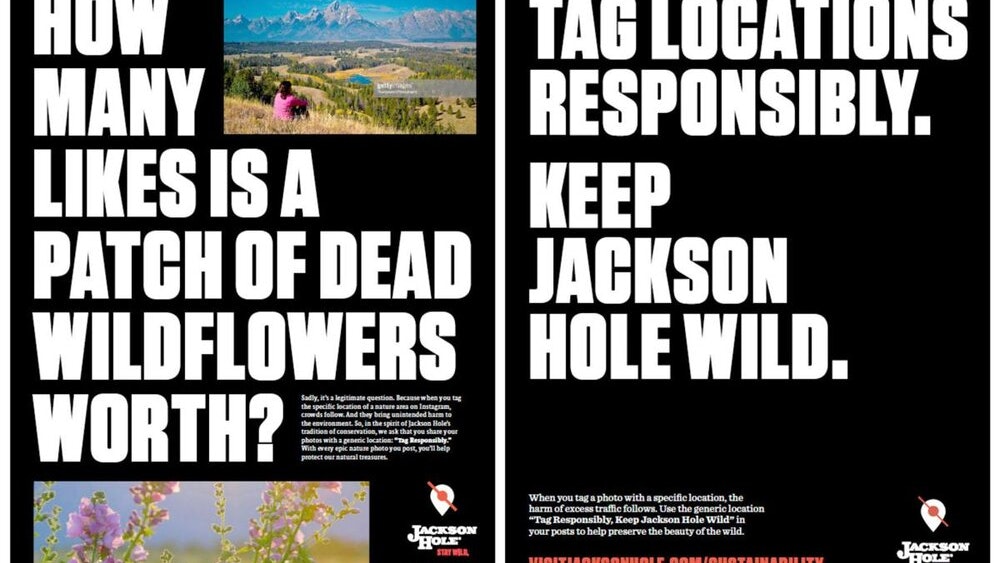 This sense of entitlement is rooted in a problematic form of environmentalism in which people use preservation and conservation as justification to be exclusionary. In his 1999 book Dispossessing the Wilderness: Indian Removal and the Making of the National Parks, Mark David Spence points out that the myth of uninhabited virgin wilderness has covered up more than a century of Native land disposession, and in many ways, laid a foundation for the 20th-century environmental movement. When people idealize the National Park System as “American’s best idea”, they are actually erasing the many injustices that Indigenous peoples suffered at the hands of the American government, and perpetuating patterns of white supremacy and settler privilege.

Danielle Williams of Melanin Base Camp and Diversify Outdoors points out that anti-geotagging campaigns are fostering a gatekeeping mentality, favoring those with racial and socioeconomic privilege. Williams argues that the campaigns suggest that some are less deserving of the opportunity to explore the wilderness and that newcomers are unwelcome. Ultimately, we must ask ourselves how we can educate visitors rather than restrict their access.

WHAT CAN YOU DO?

The best thing that you can do is know your stuff and spread your knowledge. Leave No Trace is a great place to find information on how and why to plan and prepare for a trip, properly dispose of waste, minimize campfire impacts, respect wildlife, and be considerate of visitors. Indigenous Women Hike is a great resource for learning about the history of the land on which many of our national parks now stand, and about the Indigenous perspective on respecting and connecting with that land. Melanin Base Camp has an awesome resource page with information on confronting racism in the outdoors. REI offers information on learning new skills, choosing and maintaining gear, and prepping for trips.

Encourage friends and family to learn from these resources, too. Teach them that knowing best practices for respecting and protecting the land is equally as important as knowing why it’s vital to adhere to those practices. What’s better than feeling confident that you’re being safe and respectful when spending time outdoors?