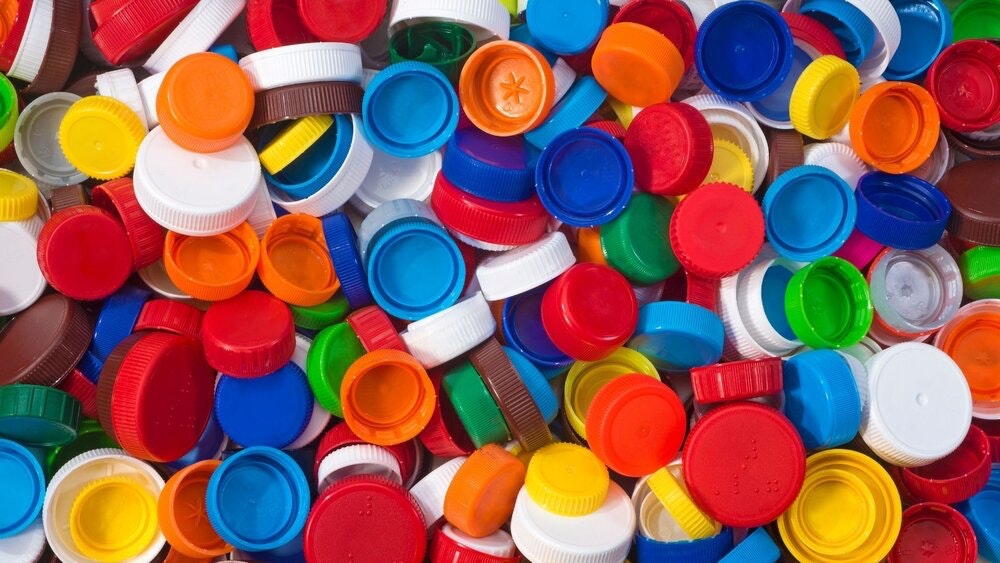 If cotton is the fabric of our lives, then plastic is the synthetic of our lives. It’s everywhere — in our clothes, cars, and bedding. We scrub our bodies with plastic loofahs, put our hair up in plastic clips, stick our feet in plastic sneakers, and save our food in plastic wrap. Plastic is in every room of our house, and in every mode of transportation that we use. Heck, we even drink it.

But, as unimaginable as it may seem, there was a time before plastic. People once used natural resources to make everything they used, without the help of the polymer that has come to define our way of life. So...is plastic cheugy? In celebration of World Oceans Day, we’re going to take a look at the history of plastic, and how we went from 0 (no plastic) to 100 (plastic in every crevice of our earth, literally).

First of all, what is plastic? Well, technically, “plastic” means easily shaped or molded. The word itself, which actually describes the properties of a material or thing, has come to be a catch-all term for synthetic materials made from a range of polymers such as polyethylene, polystyrene, polyester, and polypropylene. If you’re not familiar with polymers, they’re basically just long chains of molecules that are super common in nature. They make up things like cellulose (aka the cell walls of plants), proteins, DNA, diamonds, glass, and paper. The specific polymers mentioned above (polyethylene, polystyrene, polyester, and polypropylene), however, make up different forms of what we all now call “plastic”. Confused? Good.

The key differences between natural polymers (like cellulose) and the synthetic polymers that make up “plastic” are length and the material components. Synthetic polymers are usually much longer than those found in nature, which is what makes them so flexible, durable, and plastic. And they’re made of carbon atoms provided by petroleum and other fossil fuels.

Believe it or not, it all started with billiard balls. That’s right - the OG plastic (aka the first synthetic polymer) was invented in 1868 by John Wesley Hyatt, who was motivated by a $10,000 reward to create a substitute for ivory in billiard balls. He never got the reward money, but he did create the first material that was not constrained by the limits of nature. Now, with Hyatt’s new “celluloid”, natural materials like tortoiseshell, horn, linen, and ivory could be imitated. Hip hip, hooray! People hailed celluloid as the savior of the natural world from humans’ destructive tendencies (LOL). A pamphlet from Hyatt’s company even read "as petroleum came to the relief of the whale, [so] has celluloid given the elephant, the tortoise, and the coral insect a respite in their native haunts; and it will no longer be necessary to ransack the earth in pursuit of substances which are constantly growing scarcer." Boy were they wrong (insert cold sweat emoji).

Though Hyatt’s celluloid was the beginning of the end in many an environmentalist’s mind, it did and does have some benefits. Because celluloid was so much less expensive than ivory and tortoiseshell, it gave lots of Americans access to goods that were previously unaffordable. For the first time, Americans could buy their way into a new way of life. 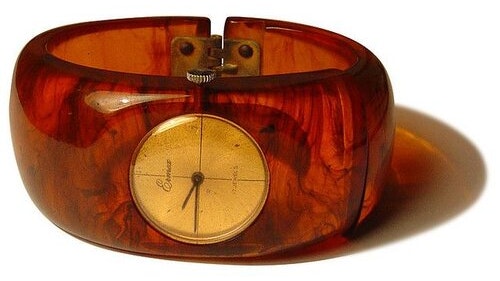 A 1930 Ermax Watch made of Bakelite

In 1907, Leo Baekeland invented Bakelite, which was the first 100% synthetic material containing no molecules found in nature. All hail the completely man-made material! Bakelite was durable, heat resistant, a great insulator, and could be molded into nearly anything. It was made of a substance derived from coal tar, a discard from the petroleum refining process, and was a great replacement for another scarce natural resource, shellac. People marveled at Baekland’s success in turning something so foul into a versatile material with seemingly endless uses. And its uses were, in fact, endless. A 1924 issue of Time magazine with Baekeland on the cover gushed, "From the time that a man brushes his teeth in the morning with a Bakelite-handled brush until the moment when he removes his last cigarette from a Bakelite holder, extinguishes it in a Bakelite ashtray and falls back upon a Bakelite bed, all that he touches, sees, uses will be made of this material of a thousand purposes.” Sounds creepy (and all too real) to us, but at the time it was widely appealing.

The success of Bakelite ushered in an era of research and development of new polymers by major chemical companies. In the 1920s and ‘30s, labs around the world created all sorts of new plastics. It was during this time that nylon (finally an artificial silk!), polyethylene (a packaging essential!), and Styrofoam (the food insulator of our dreams!), were created.

THEN CAME THE WAR…

During World War II, the plastics created in the previous decade were largely monopolized by the military. Since they were light, durable, cheap, and conserved natural resources, plastics offered a great competitive advantage to those who had access to them. Polyethylene, a closely held state secret of England at the time, was used to lighten airplanes, giving British planes an edge over German planes. Nylon was used in parachutes and ropes. Plastics were even crucial in the Manhattan Project; scientists building the atomic bomb relied on Teflon to make corrosion-proof containers for volatile gases. During the war, plastic production in the U.S. almost quadrupled, from 213 million pounds in 1939, to 818 million pounds in 1945. 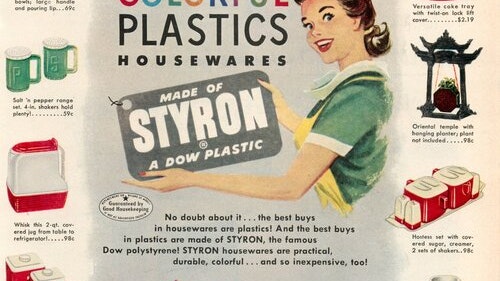 In post-war America, people were ready to live large. Plastic offered the possibility of a material utopia in which anyone could have anything, thanks to the cheap, sturdy, sanitary substance that could be molded into anything. And since the war was over, there was so much of it. Plastic manufacturers turned their attention to the production of consumer goods with all of the materials they’d developed during the war, fulfilling peoples’ desires for all the comforts of modern life that the material finally afforded to them. Housewives were urged to swap out their reusable tableware for single-use plastic alternatives. No dishes meant more time with their husbands and kids in those precious after-dinner hours. In this way, disposable plastic tableware was seen as a great source of female empowerment. Take back your time by throwing it away (or leaving it behind)! Fewer dishes means more time for YOU!

In the 1960s, the American perception of plastics shifted; what had been previously thought of as the material of endless possibility was now considered cheap and flimsy. Plastic ocean debris was first observed during this decade, and in general, people became more aware of environmental issues. The falling out of plastics was embodied in The Graduate (1968) when Dustin Hoffman’s character is told by one of his parents’ friends to pursue a career in plastics. In the movie, “plastics” represents all that is cheap, meaningless, and uncool, and audiences cringe at the misguided advice.

In the 1970s, anxiety about waste, the environment, and human health rose further. The 1973 oil crisis, during which oil shipments from the Middle East to the U.S. temporarily stopped, led companies to focus on developing biobased plastics, which began to emerge in the 1980s. Unfortunately, these biobased alternatives were not as versatile and reliable as the “real thing” and struggled to gain popularity.

Since then, plastics have enabled us to develop computers, cell phones, and all of the other electronics that are now ubiquitous in our lives. They have enabled lifesaving advances in medical technology, and have raised the standard of living for countless people across the world. Because plastics are so light, they have inadvertently saved fossil fuels in shipping and transportation, and their insulating properties play a major role in conserving heat and energy. Without plastics, many Americans would not be able to afford basic necessities that we now take for granted. Clearly, the development of plastics has led to many positive outcomes. Plastics are not all evil.

The question is, how do we use them more efficiently? How do we change public perception so that we see them as a necessary evil, rather than a material that is endlessly at our disposal, the consequences of which we are not responsible for? Are truly biodegradable bioplastics the answer? What about recycling? The truth is, there’s no perfect solution right now, and the consequences of our plastic consumption are exponentially accumulating. At the end of the day, it is the responsibility of governments and large corporations to make systemic changes that will reduce unnecessary plastic use across all sectors of our economy. But it is also our responsibility to buy and use less plastic. Simply put, pay attention to your plastic use. If you don’t need it, don’t buy it. If you need it and have the luxury of choice, is there an alternative, low-plastic solution out there? Until there’s a widespread solution for plastic use, let’s all do what we can, when we can. And while you’re at it, watch The Graduate.