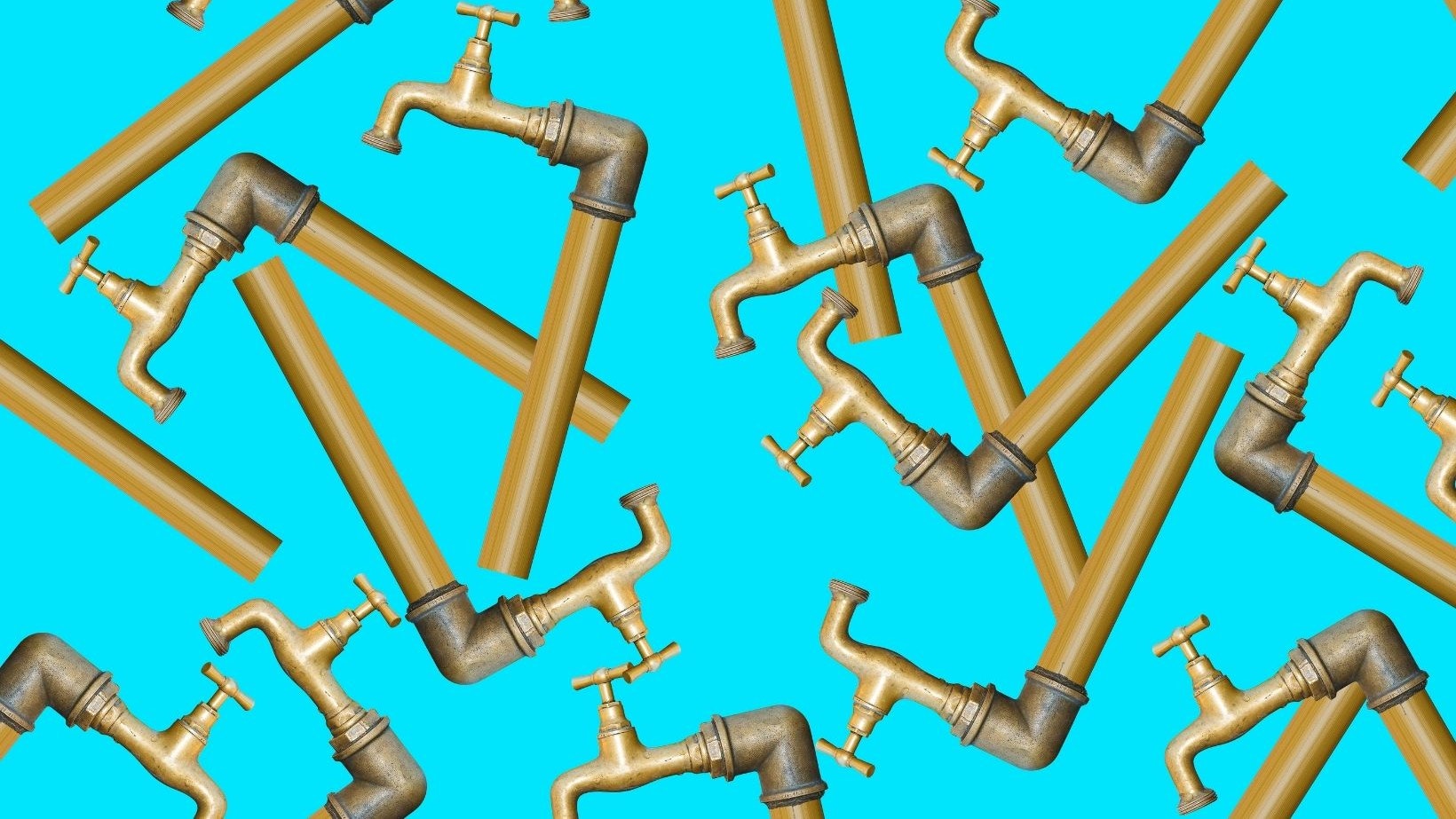 Welcome back to Taking Things to the Nexus Level: Part II! In Part I (which you can read right here), we spent some time talking about how energy uses water, water uses energy, and which fabrics to buy and avoid based on their footprints. In this post, we are focusing on the climate-water nexus. Before we get started, for those of you that may have forgotten, “nexus” is just a fancy way for scientists to say “interconnected relationships,” so the climate-water nexus considers how climate change is related to water, how water relates back to climate change, and how products and activities relate to both impacts. Alright, no more blowing hot air, let’s take in some knowledge that we know holds water.

This one is already pretty well-known and was confirmed by the latest IPCC Report. As the planet warms, ice at the north and south poles melts, raising the sea level around the world and making it harder for Coca-Cola to make those adorable polar bear commercials.

Do you think your winters now are tough? How about that rainfall? Expect things to get a bit snowier and rainier, especially if you are in the Northeast. We are all on thin ice here, since NOAA has found that the Great Lakes aren’t freezing over as quickly, making more Lake Effect snow more likely each year. For those not in the snowbelt, precipitation has increased by 14% in the Great Lakes region and the Northeast, and the number of heavy precipitation events has gone up by 35% over the past 6 decades. Flooding is also on the rise, which makes my capri-style joggers a much more sound investment.

Successfully avoided the snow and rain by moving to the southwest? You weren’t able to outrun drought. That’s right, climate change not only results in more water, but it can also mean less. California is currently in its 8th significant drought period since 2007. To put that in perspective, from the year 1950 until 2006, there were a total of only 7 significant drought years. Yes, the population has grown since then, but temperature increases from climate change have caused fewer bouts of snow in the mountains, which contributes 30% of California’s water supply, while higher temperatures speed up evaporation. Not too shockingly, this is disproportionately impacting smaller and poorer communities.

So, like we said, climate change is leading to an increase in droughts, including the latest one in the southwest. Turns out those droughts are also furthering climate change. The California Department of Water Resources notes that 12% of the state’s energy use comes from gathering, cleaning, and distributing water. Meanwhile, Science Magazine noted that in a year without any droughts, about 40% of California’s water comes from underground aquifers. During droughts, that number pumps up to 60%. Now how does this connect to climate change? A survey from the American Council for an Energy-Efficient Economy surveyed American water utility providers that, together, supplied water to nearly 20 million people. They found that the amount of energy needed to take water from underground was 50% higher than the energy required to pull water from lakes and rivers. While California uses a higher ratio of renewable energy sources to produce electricity than the country’s average (31.7% vs. ~20%), the majority of the electricity used to power pumps still runs on fossil fuels. So, long story short, droughts and inaccessible surface water are actually furthering climate change, bit by bit.

Pop quiz: Which of the greenhouse gases has the highest global warming potential? *BUZZZZZ*. Is it CO2? Nope. What about methane or nitrous oxide? While they are 28 and 265 times more potent than CO2, respectively, it still isn’t those. This answer will make steam come out of your ears, but it is…. STEAM! Or, more specifically, water vapor (so try to shove that steam back in your ears if you don’t mind). According to the American Chemical Society, water vapor accounts for 60% of the warming effect on Earth. Now before you start running around the neighborhood with a cold beer trying to condense the water out of the air and onto the side of the bottle, humans actually have no direct control over the amount of water vapor in the atmosphere. As temperatures go up, more water vapor enters the atmosphere, which is called Henry’s Law (…no, not named after Henry Winkler, even if The Fonz was cool enough to condense water and hot enough to evaporate it again). So, to prevent more water vapor from acting as a greenhouse gas, humans need to cut back on other GHG emissions to stop temperatures from rising even further.

You know what’s really crappy? Climate change from treating our crap. That’s right, all that water in the porcelain throne has got to be treated and, as a result, all of the carbon in your stool and the nitrogen in your, uh, “liquid excrement”, can be transformed into methane and nitrous oxide, which are both very potent greenhouse gases. According to the IPCC, treating bodily waste releases roughly 5% of all non-CO2 emissions around the world. Unfortunately, leaving it untreated is actually much worse (and stinkier). How can you help, without turning away all food and drink? Try flushing less (“when it’s yellow let it mellow, when it’s brown flush it down”), switching to low-flow toilets and shower heads, and if you rely on a septic tank (one of the worst offenders for methane emissions), lobby your local government to connect your neighborhood to a more centralized wastewater treatment plant.

The relationships between a product’s carbon footprint and water footprint aren’t always directly proportional, and claims that suggest otherwise don’t hold much water. As an example, let’s think about food. Yummmm. We grabbed some of our favorite snacks and conducted an analysis based on Our World in Data resources to prove that food with a high carbon footprint doesn’t always have a high water footprint, and vice versa. See the results below: 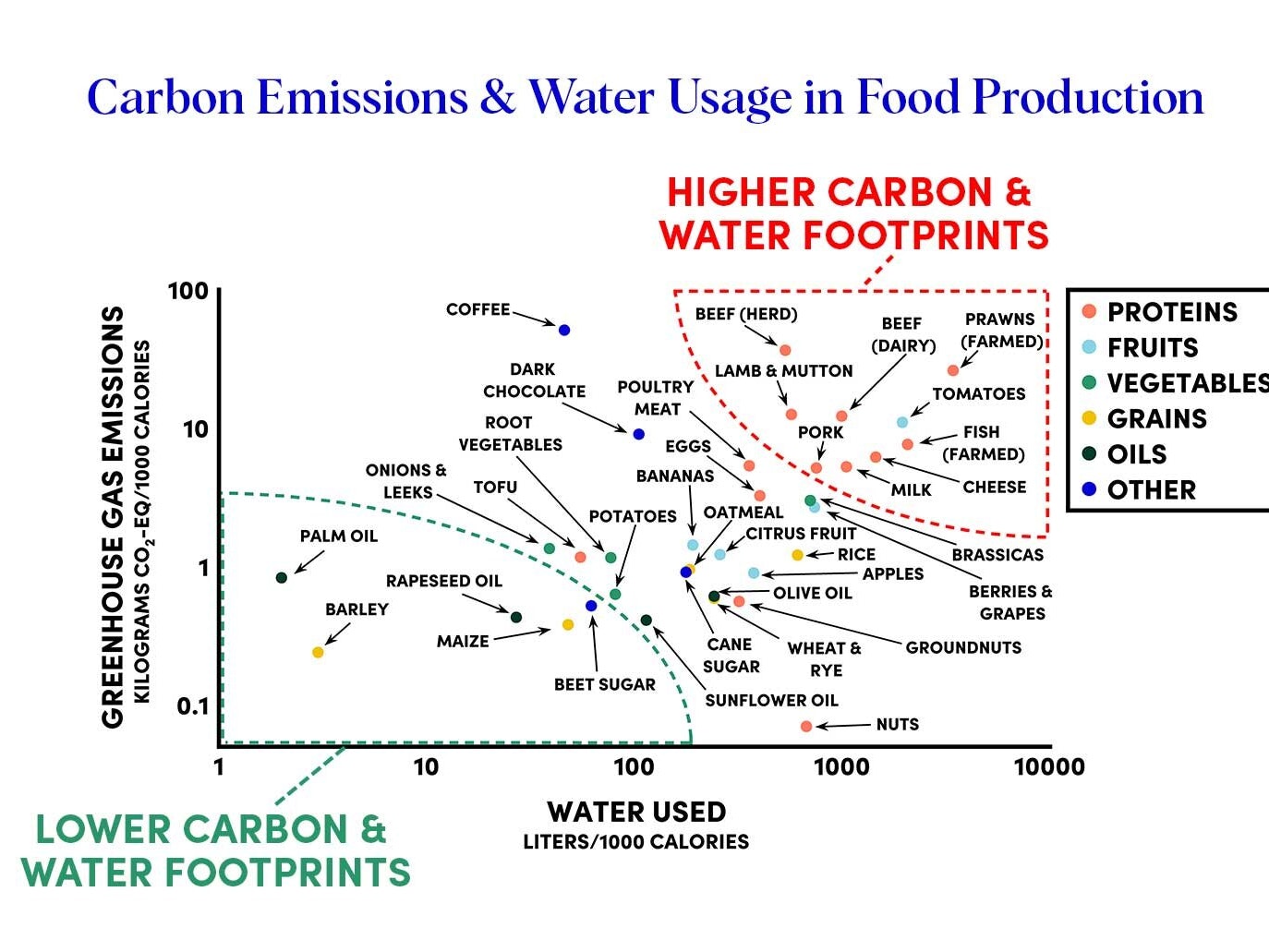 Let’s run through what these graphs show us, and figure out how you can use them for wiser grocery excursions. Every food is unique and the footprints weren’t always related, even within the same product category. Foods plotted in the top right have high carbon and water footprints, foods in the bottom left require very little water and produce few greenhouse gases, while the other two corners have a mix of high and low footprints. 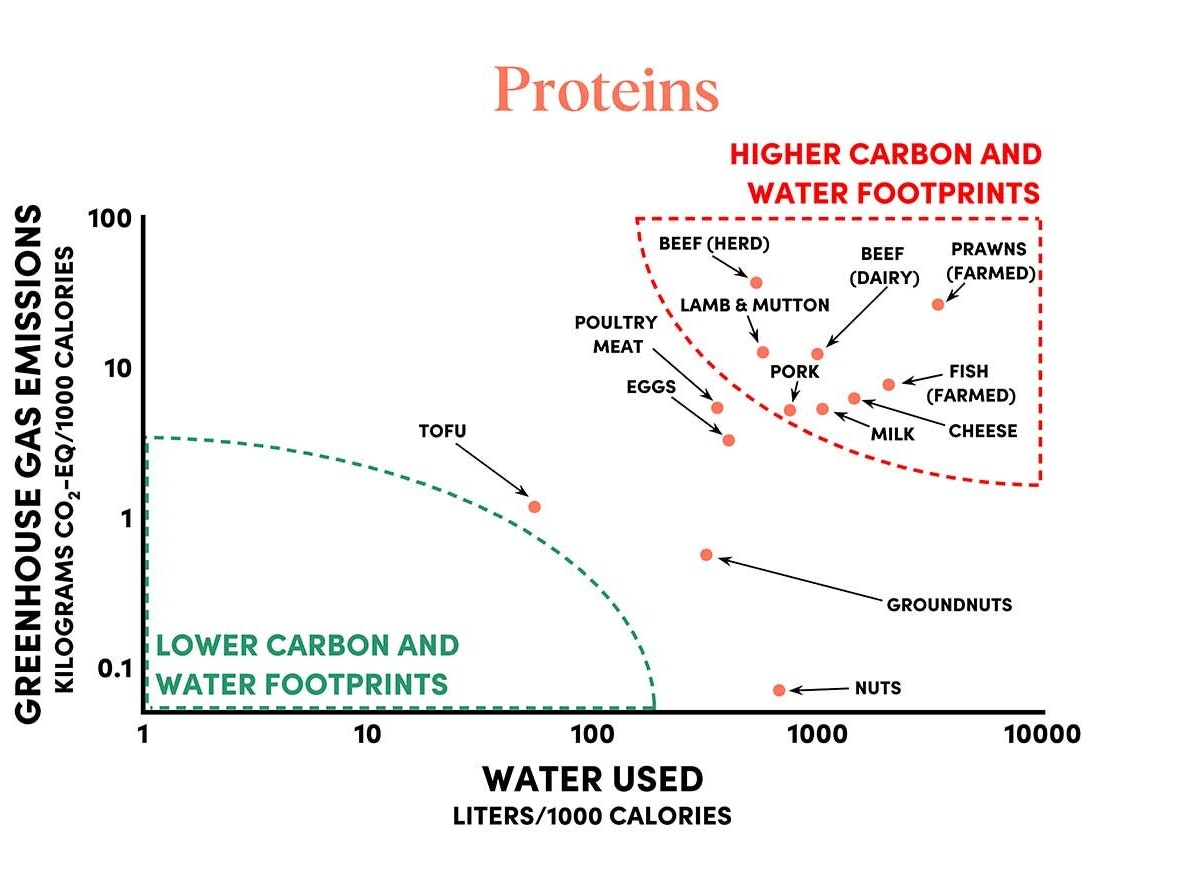 Let’s start with the climate change supervillain du jour: proteins. First thing to note is that proteins, especially from red meat (i.e. beef, lamb, mutton, and pork), dairy products (i.e. milk and cheese), and farmed seafood (i.e. fish and prawns) use up a lot of water and release a lot of greenhouse gases per 1000 calories you eat. This is in large part due to how inefficient it is for animals to transform energy from their plant-based diet to the calories you eat, and in smaller part due to cow burps, farts, and droppings. The high water use comes from growing the feed for each animal and from the need to dilute and treat water that is damaged by agricultural runoff. There is some hope in the protein space though. Chickens and their eggs have roughly 85% fewer carbon emissions than the most carbon intensive meat option and use one tenth the water of the most water intensive food. The obvious winner here is tofu, which has a carbon footprint 40x smaller than beef and a water footprint that is 60x smaller than prawns. Last thing to note here: while nuts and groundnuts may not have a huge carbon footprint, their water footprint can be pretty hefty, so try to opt for nuts from places with higher water abundance (aka, not California-grown almonds). 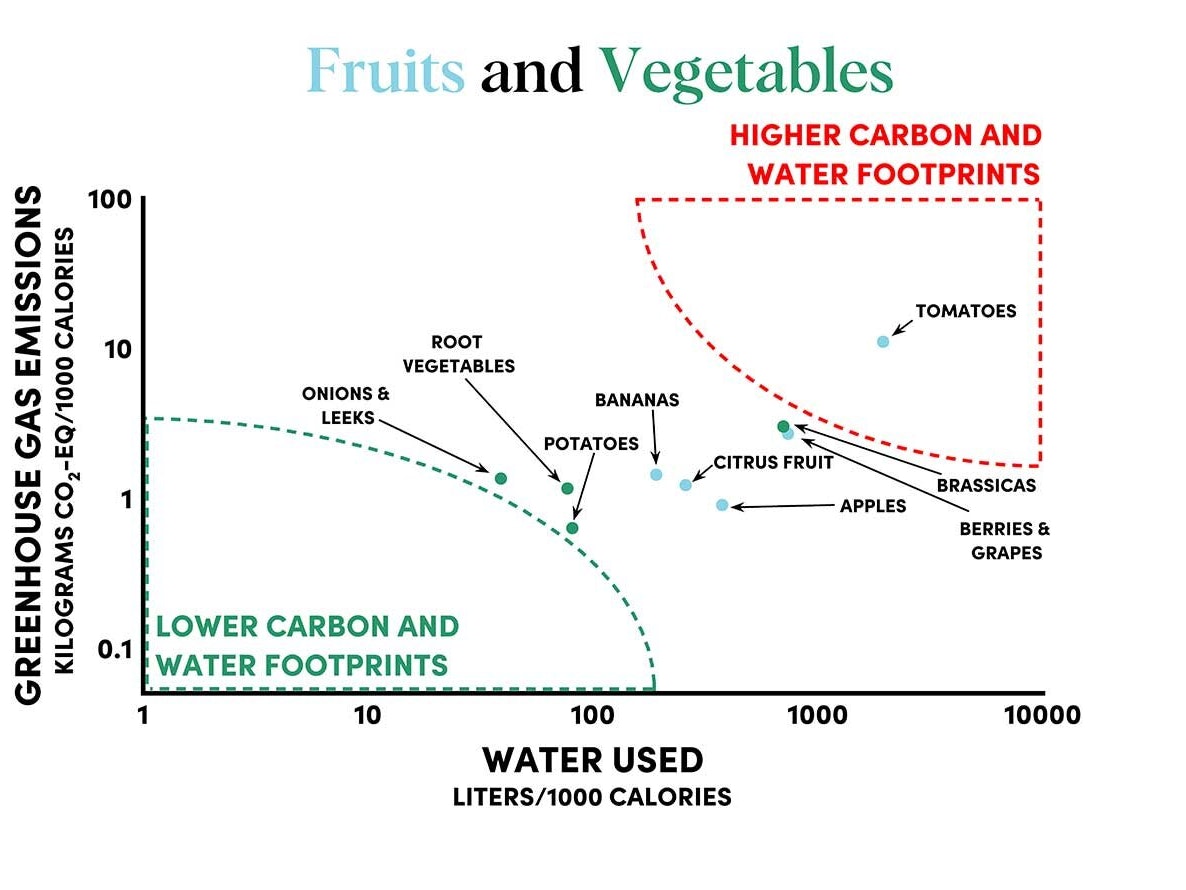 Fruits and veggies, in the second image, are actually pretty interesting. Tomatoes require a literal metric ton of water and a lot of GHGs, but the rest of the fruits and veggies all have roughly the same carbon footprint. The thing that separates them? Water. Besides brassicas (think kale, turnips, bok choy, and brussel sprouts), fruits tend to require much more water than vegetables. In fact, 1000 calories worth of berries requires nearly 20x more water than 1000 calories of onions, which gives you the right to cry while chopping your onions in peace without worrying about wasting any extra water. 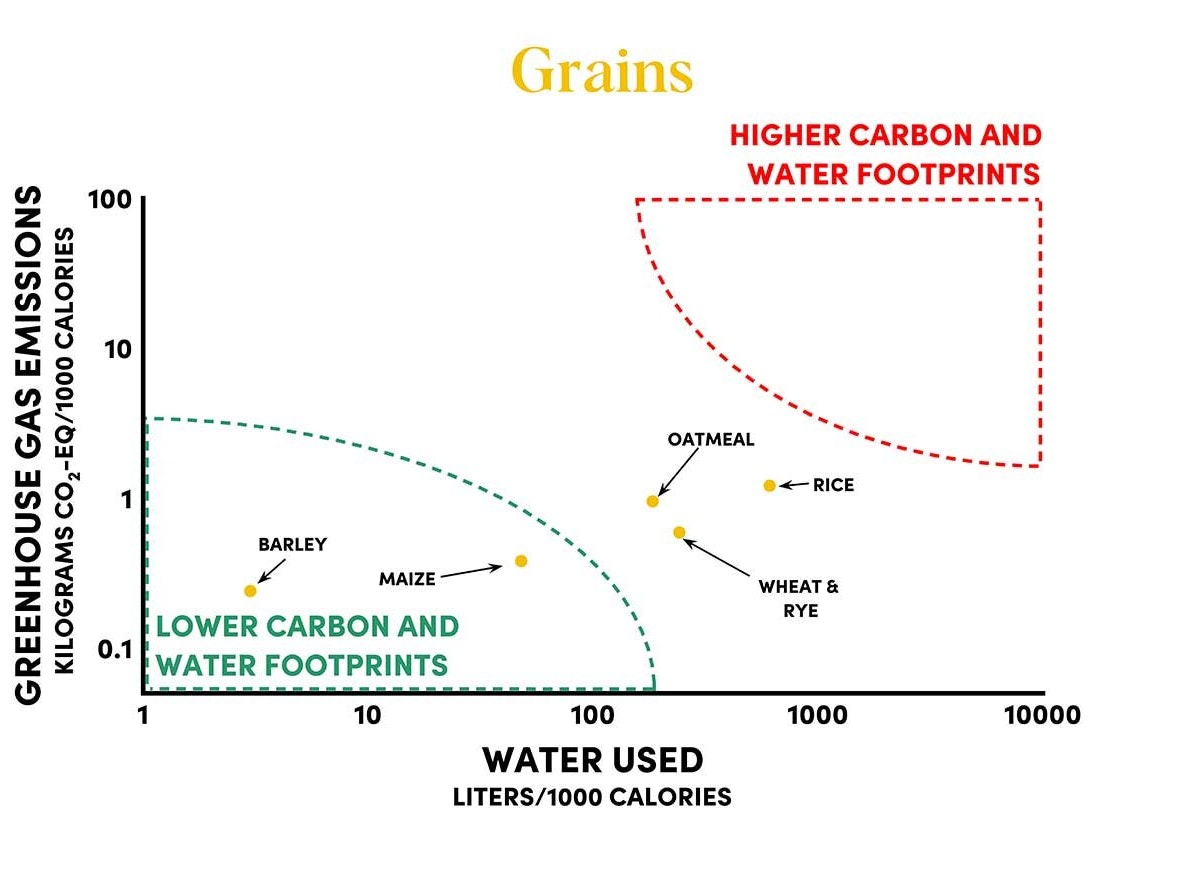 Some grains like barley and maize emerge as very “sustainable” food options, while the other three (rice, wheat and rye, oatmeal) can require much more water. This is in part due to their nutritional value and the way they are grown. For example, rice is grown in standing water, which inherently needs more water to operate, while maize produces 2x more calories than oats would on the same plot of land. Meanwhile, for the oils we cook with and the more fun things we eat and drink (like the coffee that helped me write this blog), the results are less predictable. 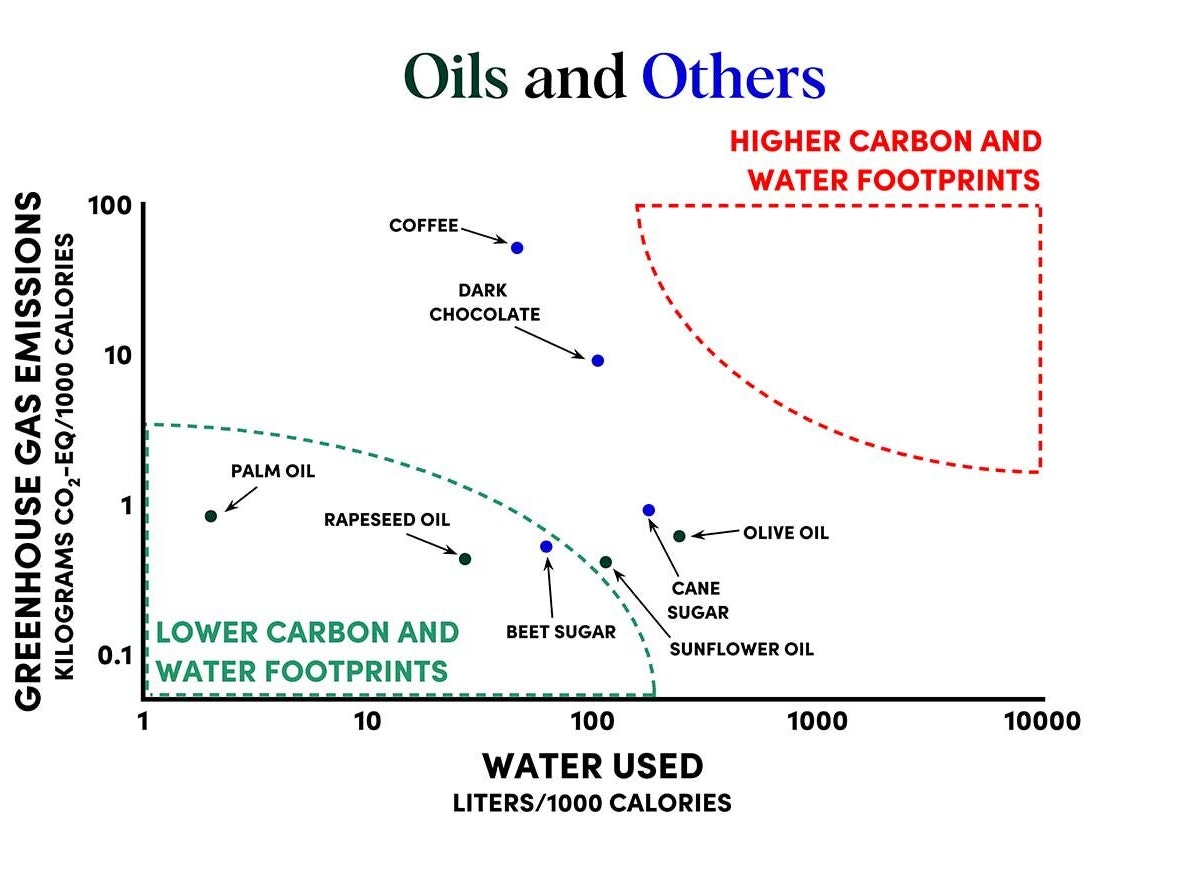 Notably, olive oil does require much more water than any other cooking oil, and coffee’s carbon footprint is pretty high up there. Quick reminder: just because something is in the lower left corner, doesn’t mean you should go clear out the grocery store shelves. For example, palm oil has its own host of environmental baggage. And just because coffee’s footprint is high per 1000 calories, remember that a cup of black coffee only has about 2 calories in it, so your carbon footprint for that cup of joe (not including the container it is in) is more like 0.21 kg CO2-eq, which is the same emissions as driving a car about 250 feet. So, no need to panic… unless the caffeine is making you!

HOW TO TAKE YOUR KNOWLEDGE TO THE NEXUS LEVEL

Knowledge is only good for knowledge’s sake, right? Wrong! You have this information, now go use it.

1) Try to install some of our suggestions from above into your everyday life. Flush your toilet less often (when reasonable) to save water and release fewer greenhouse gases from treatment plants. If you are in a water-stressed area, opt for foods (using the charts above) and products with smaller water footprints. This will help preserve the water in your local aquifer for the next drought, and make sure more greenhouse gases aren’t released when pulling underground water to the surface.

2) When you are planning dinner, use the provided charts above to help inform your decisions. Remember to aim for the left side of the chart to lower your water footprint and the bottom part of the chart to lower your carbon footprint. Share them with family and friends so they can make wise choices, as well. I tested the food charts out at the grocery store last week and ended up with more tofu than I’ve ever bought before. You are all invited to my tofu toga party!

3) Since I still have coffee on the brain and in the stomach.... See if you can limit the amount of dairy milk and disposable cups when drinking your morning/afternoon/11PM brew. A latte can have a carbon footprint that is 4x larger per serving, purely due to the inclusion of milk. But, don’t have a cow because that footprint can be cut in half or more by using non-dairy milk instead. One more thing... avoid using single-use K-cups or Nespresso pods at all costs. Those have 4x the carbon footprint per cup of coffee compared to traditional drip filter systems. Do you already have a Keurig or Nespresso Machine? No worries! More than 85% of the carbon footprint of those machines comes from each single-use pod, so if you get a reusable pod, your footprint will be at the same level as a drip coffee maker!

PS: If you want to learn more about the nexus of “energy-climate”, I suggest checking out any of these electrifying blog posts from Finch, where some real hot knowledge is being dropped about how humanity is changing the energy landscape to avoid reliance on fossil fuels.