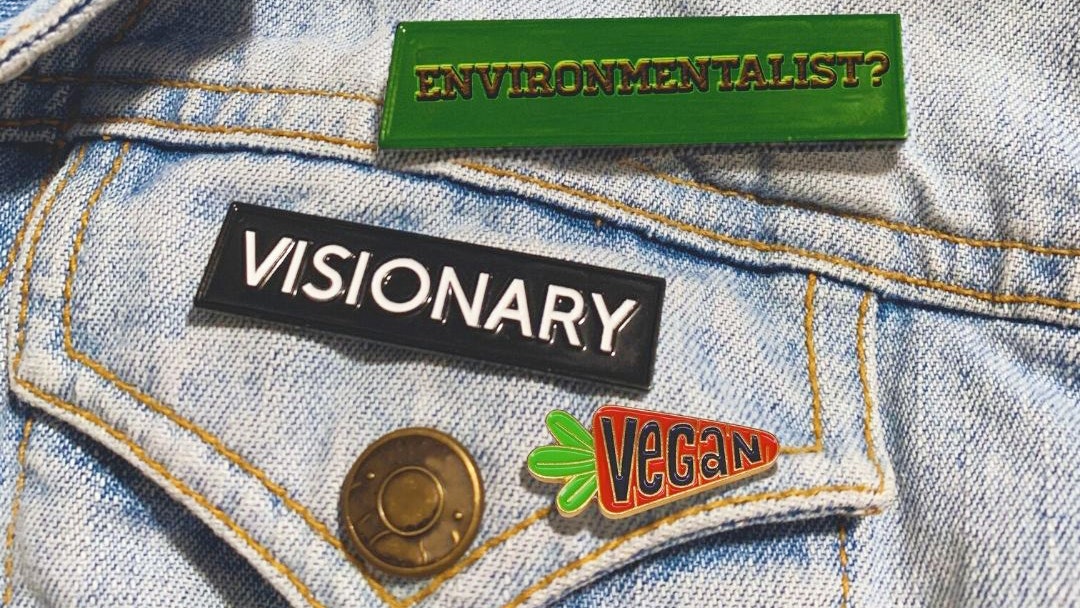 I have been a self-proclaimed vegetarian (pescatarian if we’re splitting hairs) for 13 years. Since then, I’ve accidentally (and also less accidentally) eaten bacon hidden in grilled cheese, brisket on Rosh Hashanah, and steak in Buenos Aires. Sometimes, I throw away things I know should be recycled and in non-COVID times, air travel has rarely stopped me from making it to the dance floor of a friend’s wedding. Does this make me a fraud and fake environmentalist? Maybe. Or, more likely, I’m human. In most aspects of life, we’re not held to these labels as stringently. Whether or not they admit it, Seinfeld-devotees have been known to watch Friends, extroverts sometimes need to be alone, and really good moms sometimes lash out at their kids.

For some reason, the environmental movement has forced people in or out, which has become problematic for a few reasons. Firstly, consumers have used this as a reason to let perfection get in the way of progress. Secondly, it has perpetuated a binary way of thinking where everything is good versus evil when, in reality, nothing is truly that simple because there are broader paradoxes at play. Finally, and most pressing, it allows people to act in ways that are emblematic of an overarching persona that “needs” to be upheld, which gets in the way of small actions that can make a big difference.

A 2019 study by the Brookings Institute found that environmental labels on people may actually have negative effects. When a test study was labeled as pro-environment, they were no more or less likely to donate to an environmental charity. Alternatively, when a respondent’s consumer choices were considered “not green,” they were significantly less likely to donate to an environmental cause, relative to the control. To avoid eco-shaming, 92% of 18-55 year-olds in the UK say that minimizing their impact is important to them, but 26% admit to exaggerating their environmental credentials to alleviate “green guilt,” and 20% say their community will look down on them if they aren’t behaving responsibly towards the environment. So, what does this mean? It means that people are more likely to emphasize that they’re “green,” even if they’re not, just to avoid people condemning them for it. And, those people doing the condemning are probably not as environmentally-active as they say they are either. Hmm...to me, that sounds a lot like a) peer pressure and bullying, and b) greenwashing.

In 1991, a whopping 79% of Americans identified as environmentalists, which is 34% more than today. Because this was the vast majority, I may have been less concerned about the potential detrimental effects this may have on progress. Today, so few identify themselves as environmentalists that we’re collectively losing out on opportunities for meatless mondays, bring-your-own-bottle tuesdays, and recycle wednesdays. People are less likely to participate in these activities if they’re not actively defined by them. Part of this decrease is due to shifting goal posts. Today, buying an affordable electric car or practicing ethical consumption is almost table stakes, but common perception has shifted such that to dub yourself an “environmentalist” includes more extreme measures like getting arrested in Washington with Jane Fonda.  Imagine deciding to stop reading because you’ll never read all the books, or never going to karaoke again because you’ll never be a professional singer. Sounds crazy, right? Why has society felt justified to shame people into participating in small ways, which often lead to bigger actions? A lot of vegans have iPhones, and sometimes people drive in their gas-powered vehicles to environmental protests. That’s OK.

As Nicole Seymour argues in Bad Environmentalism, environmentalists tend to feed into “purity politics,” or the view that any imperfection renders all others moot in a zero-sum game. Leonardo DeCaprio has been criticized for his use of flying privately to attend environmental events. Simultaneously, he’s given $20 million in grants supporting the environment, human rights, and conservation efforts. We can legitimately argue that he should be limiting his private air travel, but is he truly our target, or is it the other hundreds of celebrities who fly privately and give $0 away to environmental efforts? Given the above data, we might even argue that a celebrity would choose not to give money away to environmental charities if that means it opens them up to further scrutiny on the other unsustainable aspects of their life (as an aside, celebrities should not be the face of environmentalism, and there are countless people of less privilege who are the real drivers of meaningful change, that should be in the spotlight of this movement).

One of our values at Finch is “progress not perfection.” We adapt and take efficient steps forward because we believe our individual actions can lead to collective rewards. Today is also Pay it Forward Day, which aims to make a ripple of kindness felt across the world by people paying kindness forward. Aside from using today as an opportunity to repeat this wonderful act of generosity, let’s collectively recognize that there’s more than one way to be an environmentalist, not everyone is starting at the same starting line. There’s always more that we can do to positively contribute to the sustainability movement, so let’s support each other in every small step, no matter how minuscule they may seem.