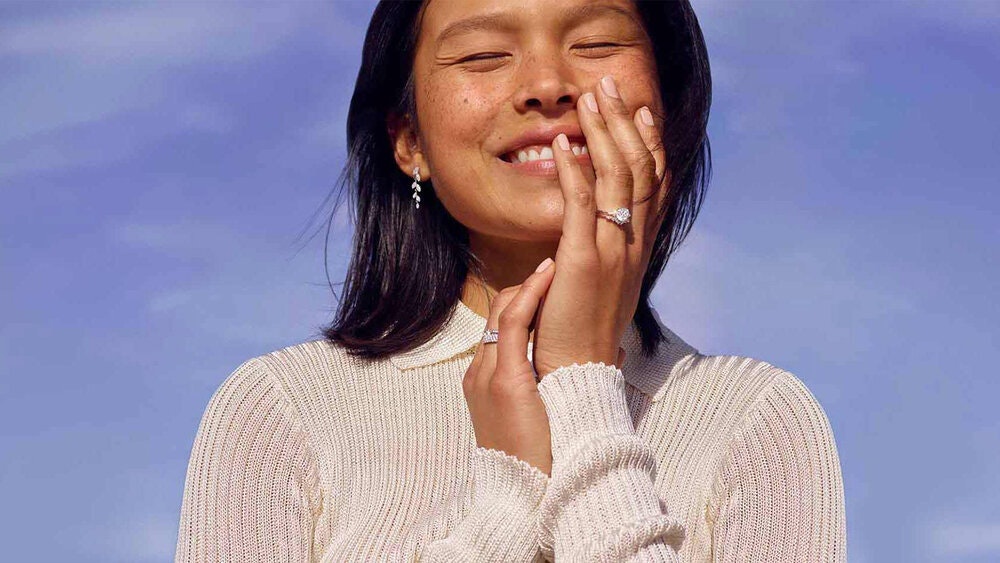 Buckle up, party people! COVID-19 appears to be winding down, and it feels like everyone and their mother is getting married. Wedding season is upon us, bringing with it vows, champagne, hit-or-miss cover bands, bad speeches, tears of joy, awkward conversations with people you haven’t seen since college, and rings. Diamond rings. So maybe you judge a ring by its cover (Pear-shaped? So 1475). Maybe you’ve thought about where that diamond came from, but have you ever thought about the combined social and environmental impact of these commercialized gemstones?

Like many other mining industries, diamond mining is inherently unsustainable. Diamonds are a finite resource and not only are we tearing the earth apart to find them, but we are also sending historically marginalized groups into conflict to do the dirty work.

WHAT IS A CONFLICT DIAMOND?

Turns out, diamond mining is a bloody business associated with fueling rebel movements and brutal wars that have led to the murder and displacement of millions of people (hence “blood diamond”). Africa is home to 65% of the world’s diamonds and much of the conflict associated with the gemstone. Sierra Leone, Liberia, Central African Republic, the Congo, Angola, and Zimbabwe are all associated with conflict diamond mining, yet all of those countries also rely on the income it generates. Basic human rights are not being met in these diamond mining communities, and workers are being subjected to forced labor, dangerous working conditions, and exposure to dangerous fumes. Out of desperation, some parents even choose to send their children to the mines instead of to school. Despite all that these people sacrifice for this line of work, none of the wealth associated with the gemstone is possessed by the mining communities. In Tshikapa, for example, the capital in the Congo near one of the world’s most important diamond sources, even the airport runway is left unpaved.

WHAT ABOUT ENVIRONMENTAL CONCERNS?

The environmental concerns (namely water, land, and energy use) surrounding the diamond mining industry are all interconnected. An estimated 250 tons of earth is moved for every single carat of diamond mined, and 142 million carats of diamonds were mined in 2019. That means that the diamond industry moved roughly 35.5 billion tons of earth in 2019, and the vast majority of the energy required to do so likely came from dirty diesel rather than renewable sources. Mined diamonds consume about 126 gallons of water per carat, which is about the same amount of water you’d use if you took a 50 minute shower (don’t try this at home). Because of the water-energy nexus, the more water used, the more energy is required, and vice versa. What we’re trying to say is that because diamond mining uses a ton of water, it also uses a ton of energy. Yikes. 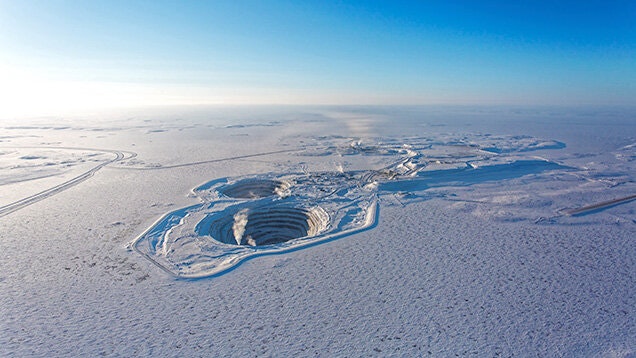 If you’re wondering how we can possibly use this gemstone as a symbol of eternal love when it really represents environmental degradation, struggle, and death to so many, you’re not alone -- the industry and everything it represents is super backwards. In this blog, we’ll give you the 411 on everything being done to solve the diamond industry’s systemic and inherent problems.

In 2003, in the wake of growing concerns from the world’s major diamond producers, the Kimberley Process was established. Under the Clean Diamond Trade Act, all diamonds imported into or exported from the United States must be certified by the The Kimberley Process, an international certification system that is supposed to guarantee conflict-free diamonds. The problem is, that’s actually really, really hard to do.

It’s pretty crazy that we can trace our coffee beans back to the source, but we can’t do so for one of the most expensive items people could buy in their lifetime. The Kimberley Process doesn’t work for a few reasons. First of all, once a diamond is cut, it’s pretty much impossible to tell where it came from. If you want to hide the source of a diamond, all you have to do is cut it. This makes it extremely hard to police the laundering of diamonds from conflict zones where known human rights violations are taking place. Moreover, the goal of the Kimberley Process is to guarantee that the diamonds sold around the world have not benefited rebel movements. This narrow goal does not prevent forced labor, torture, and other abuses often suffered by diamond miners in Africa who live under oppressive, abusive governments and their armed forces. Finally, the Kimberley Process only applies to rough diamonds. The impossible-to-trace cut stones that we mentioned above are not regulated under the Process, making it all the easier for conflict diamonds to hit the mass market.

Despite its flaws, the Kimberley Process has made an impact. It is estimated that only 5-10% of the world’s diamonds are traded illegally now compared to 25% before 2003. While this is great progress, we won’t be satisfied until all diamonds are sourced ethically. In its current state, the Kimberley Process does nothing to guarantee that the people mining diamonds are working in safe conditions and being paid fairly, so we encourage you to be wary of diamonds that tout this certification. After all, every diamond in the U.S. should technically have this certification; it’s not much to brag about.

IS THE KIMBERLEY PROCESS THE ONLY ALTERNATIVE TO TRADITIONALLY-MINED DIAMONDS?

The good news is, there are tons of more ethical alternatives to traditionally-mined Kimberley Process-certified diamonds. Read on to learn about your options.

Technically, “conflict-free” diamonds are those that are certified by the Kimberley Process, which we now know means simply that they do not finance rebel movements vs. an overall guarantee that no conflict took place and that no human rights were abused. As we learned, this doesn’t mean much when there are still a slew of issues associated with these stones, such as human rights abuses and environmental degradation. Thankfully, there are companies out there doing the work that the Kimberley Process and local governments will not. Brilliant Earth, a global leader in ethically sourced fine jewelry, has a line of “ethical” diamond jewelry called Beyond Conflict Free, which does not finance rebel movements, protects against human rights abuses, minimizes environmental degradation, maintains safe and responsible labor practices, and supports community development. Brilliant Earth accomplishes this by working closely with their suppliers to ensure their diamonds are only sourced from specific mine operators that follow internationally-recognized labor, trade, and environmental standards. Their chain of custody is certified by the Responsible Jewellery Council, and their environmental claims are certified by the International Organization for Standardization. We recommend prioritizing these certifications if you’re buying “natural” (aka traditionally mined) diamonds from any supplier.

What do hamburgers, organs, and diamonds all have in common? They can all be grown in a lab. Creepy, but true. Lab created diamonds are grown using technological processes that replicate the conditions under which diamonds naturally develop in the earth. They are a less-expensive, mine-free version of the real thing; they even exhibit the same physical, chemical, and optical characteristics as mined diamonds. What’s the catch, right?

While growing diamonds in a lab does require quite a bit of energy (the process involves extremely high temperatures and pressure) it doesn’t nearly stack up to the energy required to move all that earth in diamond mining. According to a 2014 study done by consulting company Frost & Sullivan, lab-grown diamonds require less than half of the energy of mined diamonds, and about 15% of the water. As we know, less water = less energy, and vice versa. The Diamond Foundry tackles the lab-grown energy footprint by using only renewable energy to create their diamonds (their production runs on 100% hydropower sources from the Columbia and Wenatchee rivers).

Turns out, it's actually really hard to compare the carbon footprints of lab created versus mined diamonds because most mines don’t keep track of detailed environmental data. But when we consider the water and energy impacts of both, we can confidently say that from an environmental standpoint, lab-grown diamonds look like the obvious favorite. It goes without saying that the fact that these diamonds have no association with human rights abuses means that we will choose them over their mined counterparts every single time. If you’re in the market, check out Brilliant Earth and Frank Darling.

Recycled (aka vintage) diamonds are hands down the best option from an environmental standpoint. If you know anything about our rating system, you know that we stan (any Zoomers in here?) recycled materials, so our enthusiasm for these probably comes as no surprise. All of that energy required to move billions of tons of earth and to power labs that grow diamonds becomes obsolete when we bring recycled diamonds into the picture. No energy needed, and definitely no unethical mining needed. Of course, there’s no guarantee that recycled diamonds weren’t once associated with conflict. We encourage you to weigh the potential human rights costs with which these stones may have once been associated, with the environmental benefits here. Not an easy assignment, and there’s no right answer. If you decide that this is your jam, Brilliant Earth and Valerie Madison both offer recycled diamond jewelry sourced from estate pieces and other previously existing fine jewelry.

TL;DR: Recycled diamonds are the most environmentally responsible option out there, with lab-grown coming in second, and “ethical” (aka traditionally-mined stones with extra certifications) coming in last.

At the end of the day, consumers have a ton of power. After all, we have enough power to place an arbitrary value on a shiny rock and make Neil Lane so rich. The more people that choose to buy recycled, lab-grown, and “ethical” diamonds, the lower the demand for traditionally mined diamonds gets. But this doesn’t solve the problem. Human rights abuses are still pervasive in the diamond industry, and the people suffering from these abuses are still the ones who need the income generated by diamond mining most. A long-term solution must improve the livelihoods of miners in communities like Tshikapa by lifting people out of poverty, putting children back into school, and ensuring safe working conditions for those fit to mine. The certification model Fair Trade, which is used to certify goods including gold (but not diamonds), focuses on improving the livelihoods of miners and protecting the environment. This model is ultimately what the diamond industry needs. The non-profit Diamond Development Initiative is working to implement new standards for ethical diamond production that include environmental protection measures as well as support for miners in communities affected by resource-based conflict. If more stakeholders in the public and private sectors get on board with this type of initiative, there is a potential for lasting change. Until then, we encourage anyone in the market for diamond jewelry to shop recycled if possible. If not, choose lab-grown, or consider an alternative stone like sapphire or emerald.