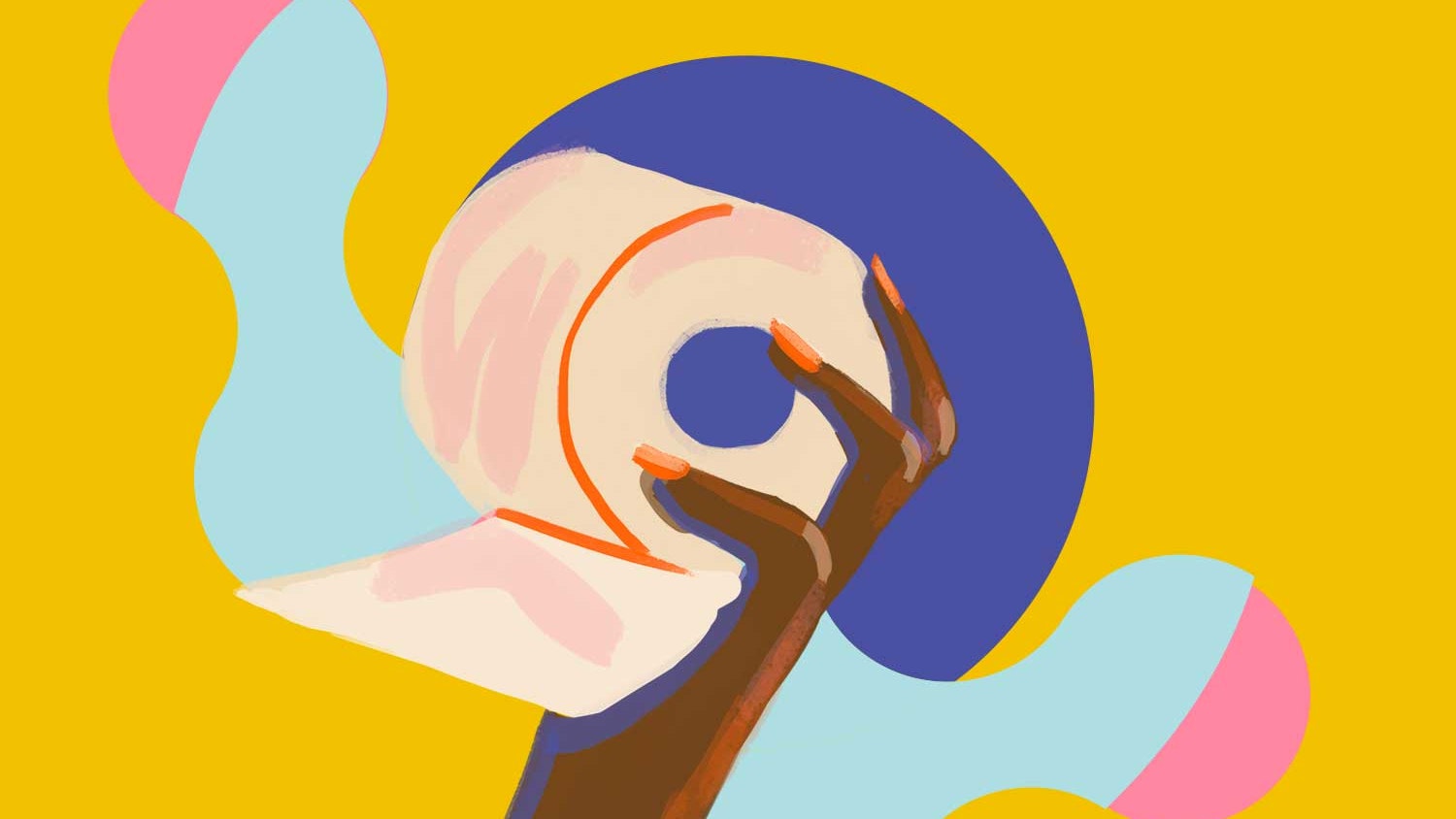 Let’s start with a not-so-surprising fact: Humans have always done that ‘#1’ and ‘#2’ business and therefore have always needed a good “wipe.” The perhaps more surprising fact is that toilet paper in its current form is a relatively new product. Throughout our human evolution (Shocker! We believe in evolution over here.), we have wiped with all sorts of things, from leaves to stones, corn cobs to animal furs, communal sponges to snow and seashells. Needless to say, we’re pretty grateful to be alive during the era of fluffy toilet paper sheets and the super-sanitary bidet.

To really unravel the influence and impact of toilet paper today, we thought it would be helpful to know how we started using the stuff in the first place. Time to buckle up for a history lesson…

The lore around ancient butt-cleaning methods ranges from comedy to psychological and cultural commentary. In ancient Rome, public latrines offered a tool called a tersorium for Romans to use after defecating. The tool was a stick with a sea sponge affixed to one end, which would be dipped in salt water or vinegar between uses and shared by all. Roman philosopher and satirist Seneca famously wrote about a gladiator who killed himself by shoving a communal tersorium down his throat instead of heading into the arena. Greco-Romans also wiped with fragments of ceramic -- often inscribed with the names of enemies -- as an emblematic way of soiling upon their opponents. Examples scrawled with the names of Socrates, Themistocles, and Pericles have been found in Athens and Piraeus.

If you were following us in July, this may be a refresher from our older post, but we can never learn too much about bidets. In 17th century France, the bidet was born. Because the act of transporting water was arduous at that time, it was considered an indulgence for the aristocracy and was associated with civilized life. Marie Antoinette was even provided with a red-trimmed bidet while she awaited the guillotine. During World War II, Americans were widely exposed to the bidet for the first time. GIs stationed in Europe would visit bordellos, or brothels, where they began to recognize the bidet as a fixture in the bathroom of a sex worker. In the minds of Americans, the bidet became associated with the taboos of sex and menstruation, which did not play well in a country with puritanical roots. Obviously, a lot has changed culturally since the mid 20th century, but despite multiple large marketing campaigns that attempted to popularize the bidet in America, it never stuck.

Instead of the civilized bidet, the most popular form of TP in early America was a dried-out corn cob stripped of its kernels. Newspapers and magazines began being widely distributed in the beginning of the 18th century and, thankfully, eventually took the place of the corn cob as the go-to wipe of choice. The first commercially-available toilet paper sold in sheets was sold in 1857 by Joseph Gayetty and, by 1890, Clarence and Irvin Scott had brought us the perforated toilet paper rolls that we know today.

While the times before modern toilet paper sound uncomfortable and pretty unsanitary, we have to give credit to the older alternatives for having a lower environmental impact. All of them (aside from the bidet) were either made of objects found directly in nature or were man-made materials being given a second life in the form of toilet paper (We’re still debating whether this can actually be considered upcycling by today’s terms). Today, Americans use a staggering 36.5 billion rolls of toilet paper every year. That’s a whole lot of trees going into our toilets - 15 million annually if you can believe it. About 1.5 pounds of wood is required to make just one roll of our precious TP. Fortunately, most of the world’s population seems to have figured out that toilet paper is not the answer to our “to wipe or not to wipe” conundrum; only about 30% of people use TP. So why, in the face of mass-scale deforestation, clear evidence that carbon sequestration by trees is critical to fighting climate change, not to mention massive improvements in modern bathroom technology, do we Americans continue to rely on (and even hoard) toilet paper over brilliant alternatives such as bidets?

The cost of using toilet paper is high...and we’re not talking about the dollars and cents you have to shell out at the store. On top of the annual 15 million trees we mentioned earlier,

473 billion gallons of water are required to produce America’s annual supply of toilet paper. One roll of conventional virgin pulp toilet paper requires 37 gallons of water to make and lasts the average person four to five days, while a bidet uses about ⅛ of a gallon of water per use. By these numbers, if you choose a bidet, you’ll use up to 97.5% less water per week compared to someone who uses virgin pulp toilet paper. Not to mention, the bidet does not contribute to deforestation. Needless to say, we think it’s high time to embrace the bidet. Even if you are an occasional bidet user or if you use bidets to make the TPs job easier, you’re still going to come out ahead of non-bidet users in the environmental impact race.

In the meantime, it’s important to buy toilet paper that uses as little water as possible and doesn’t contribute to deforestation. Below, we’ll give you all of the info you need for next time you stock up on TP.

The two main components of toilet paper to pay attention to are paper pulp and chemical treatments. You can read our in-depth analysis on different types of paper pulp and chemical treatments used for tissue products here. If you’re just looking for some quick tips without all of the details, we recommend avoiding toilet paper made out of virgin paper pulp in favor of recycled, bamboo, or wheat straw pulp TP. If you’re going to go for recycled-content in your toilet paper, the EPA recommends choosing an option that contains at least 20-60% post-consumer recycled pulp. Don’t be afraid to go above and beyond: more post-consumer recycled pulp = less waste.

As far as additives go, fewer chemicals = toilet paper that’s better for your butt and our planet. We’re thrilled to see more companies hopping on the chlorine-free-bleaching bandwagon, and we’re hoping this will become the norm in a few years' time. Chlorine bleach contains harmful environmental pollutants called dioxins. When emitted during manufacturing, dioxins are known to poison our waterways, animals, and eventually, us. At high levels of exposure, they can cause hormone and immune imbalances, allergies, and even cancer. Make sure you look for the PCF (processed chlorine free) label on recycled products, and the TCF (totally chlorine free) label on virgin products to ensure you’re supporting companies steering clear of chlorine bleach.

In case we weren’t clear before, buy a bidet! As mentioned above, you can cut your water use by up to 97.5% by choosing a bidet over virgin pulp toilet paper. Bidets are also more sanitary than toilet paper and are gentle on your skin, leading to fewer rashes, urinary tract infections, and hemorrhoids. We love Tushy for their cheeky messaging and reasonable price-points.

Whatever you do, avoid wet wipes. They can cause irritation and rashes and contain even more nasty chemicals than toilet paper. Wet wipes aren’t designed to disintegrate like toilet paper is (yep, even the ones that claim to be “flushable”). When you flush wet wipes, they build up in our sewer systems and cause blockages called fatbergs, which are extremely difficult and expensive to move. You can read about some nasty behemoth fatbergs here if you’re the type who just needs to know.

As a rule, bidets > toilet paper. But, if you’re going to go with TP, choose a recycled or tree-free option because 15 million trees is wayyyy too many trees going down our toilet drains each year. If we all switched to recycled toilet paper, we could dramatically reduce this number AND keep tons of post-consumer recycled pulp out of the landfill. If we all switched to bidets, we could save a ton of water and a ton of trees. Either way you go, these options are pretty luxurious compared to corn cobs and communal sponges on sticks.