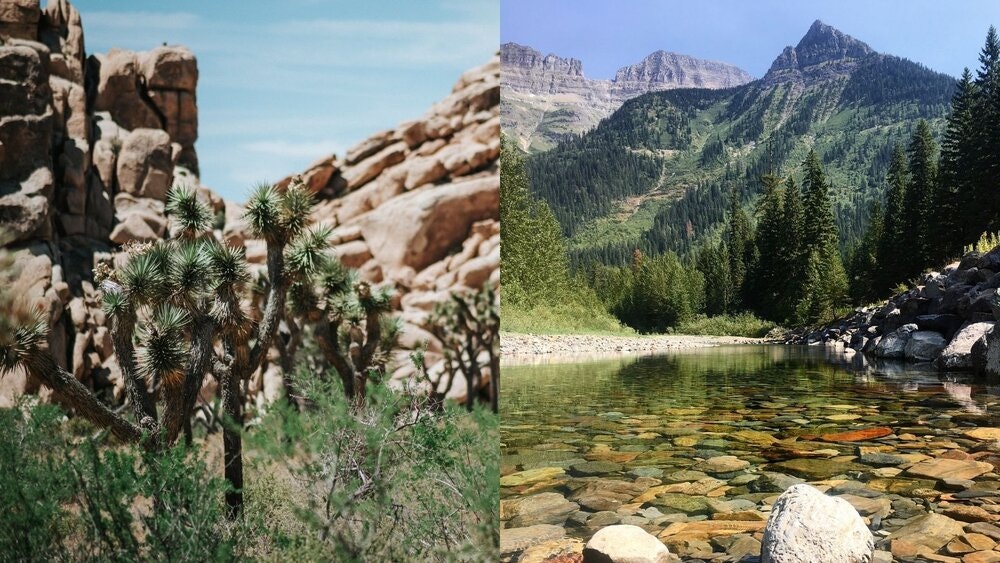 Happy Earth Day! This year, we’re taking a look at environmentalism through the lens of conservation and restoration — because sometimes positive reflection is necessary in this crazy, overwhelming, negativity-spewing world. While we’re all busting our butts to make the world a better place, let’s take a deep breath and acknowledge some of the awesomeness going on.

Restoration is the act of repairing something, or returning it to its original state. This concept is suuuper important in the fight against climate change since restoring ecosystems is a necessary step in bringing our earth back into equilibrium.

IS IT POSSIBLE TO RESTORE ECOSYSTEMS?

Abso-freakin-lutely. Did you know that for about 70 years, from the end of the 1920s to the mid-1990s, there were no wolves in Yellowstone National Park? Seriously. The eradication of this species from the park was the result of a merciless pursuit by hunters since the park’s creation in 1872. Over the course of fifty years, hunters wiped out all of the wolves in the area, leaving none by the time the late 1920s rolled around...talk about the opposite of the roaring ‘20s... While knocking out an entire species can wreak emotional havoc on our psyche, the eradication of a species also deeply affects the broader ecosystem and, in this case, the elimination of the wolves had a ripple effect of negative consequences. Not only did the elk population expand due to the decrease in predators, but the elk also had more time and freedom to graze the land. The elks’ overgrazing was problematic for beavers, which rely on young willow to survive in the winter, and songbirds, which use willow stands as a habitat. By the mid-1990s, there was only one beaver colony left. This web of consequences is part of what scientists call a ‘trophic cascade,’ which basically means when one species is affected, there are cascading effects both up and down the food chain. 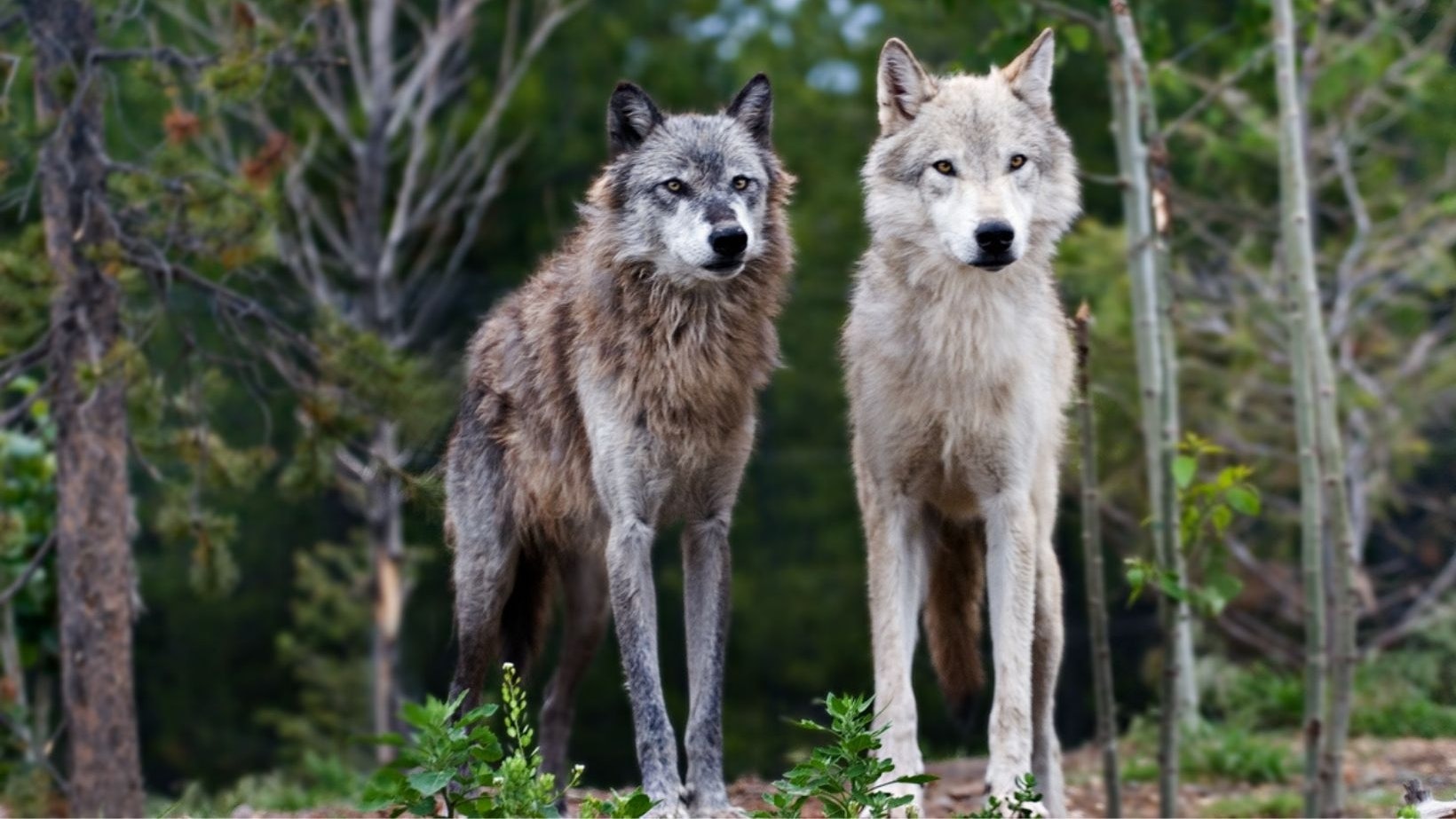 In January 1995, biologists in Yellowstone brought fourteen wolves from Jasper National Park in Alberta, Canada to the park. Even though they might not be the exact same herd as were there originally, over the course of the past 25 years, those wolves have helped to stabilize the ecosystem. The elk, whose numbers are now controlled by a new predator, have less time to stand around and overgraze along river beds since they are frequently on the move in an attempt to avoid wolves. The once-decimated willow stands now grow in abundance, and are more robust. Beavers, once again able to rely on this food source, have grown in numbers (there are now nine beaver colonies where there was once just one). More beavers means more beaver dams, which means more needed TLC for waterways -- beavers have incredibly positive effects on stream hydrology, including regulating stream runoff, storing water, and providing shaded water for fish to reproduce and spawn.

As it turns out, the more elk that are killed by wolves, the stronger the elk population becomes overall. This idea may seem counterintuitive, but hear us out: when wolves hunt for elk, they typically attack the weakest link in the heard, leaving only the stronger elk to survive. Wolf kills benefit other species, too. Animals, birds, and insects such as coyotes and bears, ravens and eagles, and even beetles feed off of elk carcasses once the wolves are done with them. Experts say that wolves may even be able to help elk better withstand climate change by leveling off their herd size, which could otherwise fluctuate a lot during particularly bad winters and increasingly frequent droughts.

WHAT ABOUT CURRENT RESTORATION PROJECTS?

Did you know that NYC was home to the biggest landfill in the world for 46 years? Back in the day, it was called Fresh Kills Landfill (an appropriately ominous name) and contained 150 million tons of solid waste. The whole thing was 2,200 acres, equivalent to three Central Parks piled high with 200-foot-tall trash mounds. That's a pretty disturbing mental image that we can’t quite wrap our heads around, especially when you consider the fact that before it was established on Staten Island in 1948, it used to be a saltwater marsh clean enough to swim in. It only took seven years for this former marsh to turn into the biggest landfill in the world, and it remained so until its closure in 2001. At its peak in 1986 and 1987, it received up to 29,000 tons of trash per day as the primary dump site for NYC’s residential trash and, by 1991, it was the city’s only landfill for household garbage. As you might imagine, Staten Island residents were not so thrilled that their borough was home to the world’s biggest dump and, in 1996, a law requiring the landfill to close by the end of 2001 provided a light at the end of the trash tunnel.

Fast forward twenty years and Fresh Kills has now been rebranded into Freshkills Park. It is currently being transformed into the largest park developed in NYC in more than a century, roughly equivalent to the size of Lower Manhattan south of 23rd Street. This is a huge environmental win for Staten Island. Over the past twenty years, the parks and sanitation departments have worked with Field Operations (the landscape architecture firm responsible for NYC’s High Line) to restore creeks, wetlands, scrublands, forests, and fields, which park goers will be able to wander by kayak, bike, horseback, on foot, or by car. North Park is set to open in Spring 2021, and the rest of the park will slowly open up by 2036. There are already new species of birds nesting in the area, including Sedge Wrens, which haven’t nested in NYC since 1960 and are listed as ‘Threatened’ in New York State. Things are coming together for this area, which was once a putrid dump crawling with vermin. 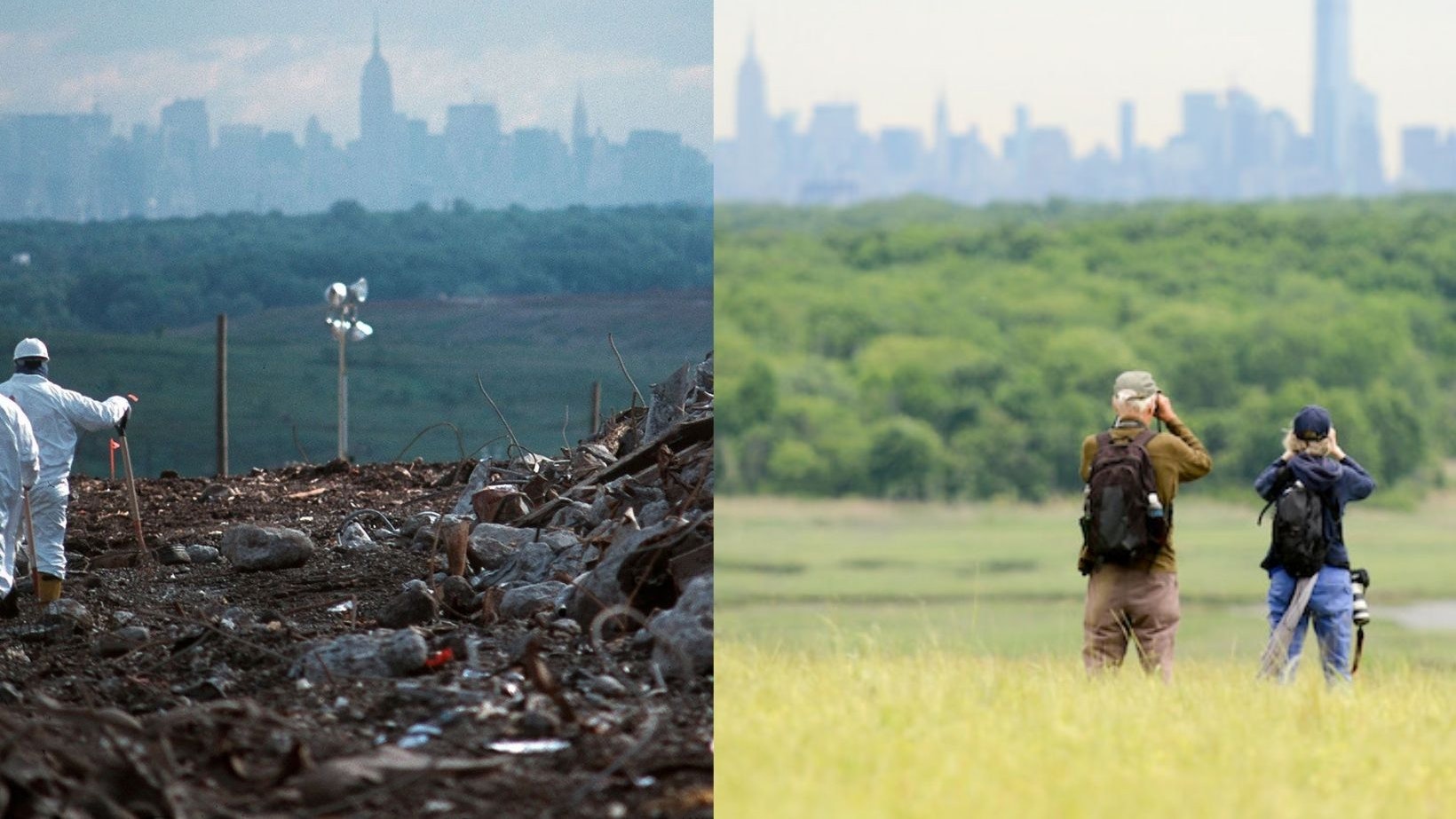 If you’re wondering how a park can be built on mounds of trash, you’re in good company. Basically, the trash in Freshkill Park was shaped into four mounds and then capped with plastic, which is then covered with layers and layers of clean soil planted with native grasses. Trees have been planted throughout the park, manually and with the help of seed-carrying birds. But, there’s still a bunch of rotting trash underneath all of that, which releases methane, carbon dioxide, and leachate, aka “garbage juice.” Don’t let this gross cocktail of gases dissuade you from visiting though because, amazingly, the methane, a super potent greenhouse gas, is refined by the Sanitation Department and pumped into 20,000 Staten Island homes to provide energy for cooking and heat. A cup of tea made possible by decades of NYC’s rotting trash? May not sound too appetizing when we put it that way, but we are so in. Thank you, good sir, we’ll have another. Other gas emissions and dangerous pollutants are reduced almost completely by the refining system in place, which doesn’t emit odors or leak gas off-site. If you visited Freshkills today, you’d see rolling hills, and no sign of the park’s former life as the world’s largest dump. Are you as impressed as we are?!

We love seeing restoration projects in action and can’t wait to visit Freshkills Park once it’s open to explore. It’s also super symbolic and encouraging that the world’s largest landfill is being transformed into a park that does justice to the area’s natural beauty from times before landfills existed. However, trash has still got to go somewhere and we all now know that there is no such thing as “away”. NYC’s trash is now shipped to landfills and incinerators in Ohio, Virginia, New Jersey, and Pennsylvania, many of which are in the backyards of economically-disadvantaged, historically-marginalized communities that don’t have the resources to fight back. The Sacrifice Zone is a must-watch documentary about the Ironbound district of Newark, New Jersey, where much of NYC’s trash is burned. There’s a system of environmental injustice at play here that needs to be dismantled.

ARE MORE RESTORATION PROJECTS PLANNED FOR THE FUTURE?

In October 2019, the New York City Council approved a proposal to close Rikers Island, the 10,000-bed jail complex, which opened in 1932 and is infamous for its history of abuse and mismanagement. This is a huge step forward in the movement to end mass incarceration and has also opened up the island for restoration. Rikers Island is set to close in 2027, and big plans are already underway. In February 2021, the Renewable Rikers Act was signed into law, marking the beginning of a study on how building renewable energy infrastructure (such as wind and solar power) and battery storage facilities on the island could help NYC reach its goal to phase out fossil fuels.

A non-profit planning agency called Regional Plan Association (RPA) is suggesting that the city build a composting center, wastewater treatment facility, and a waste-to-energy plant on the new Rikers Island. RPA says that these new facilities could reduce sewage overflow and air pollution in Harlem, the Bronx, and Queens, taking responsibility for the environmental injustices imposed on these waterfront communities, which have suffered as a result of outdated waste management plants along the East River. Proposed updates to Rikers Island would also open up miles of formerly inaccessible shoreline for educational and recreational activities. 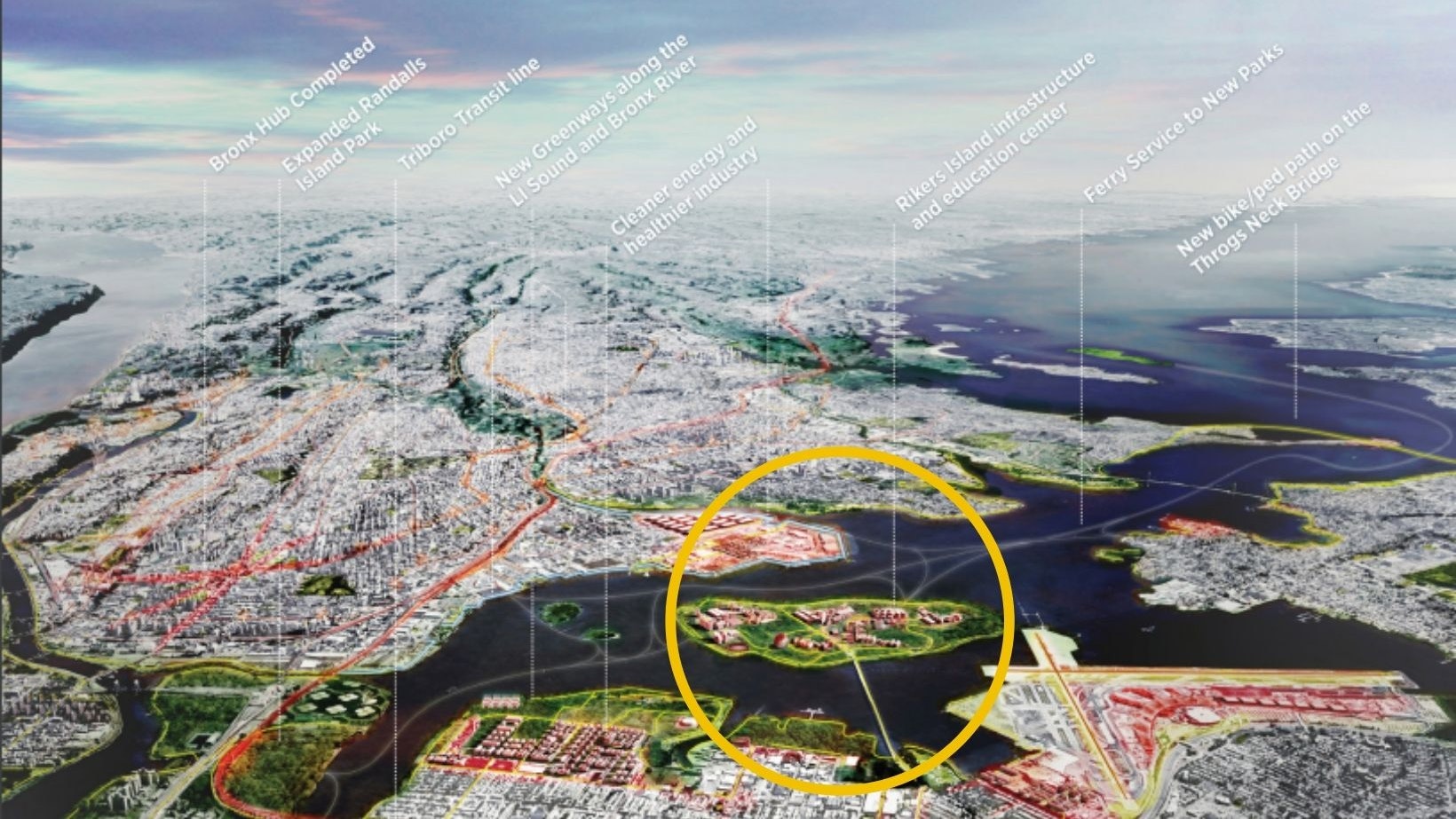 Let’s talk numbers. RPA claims that installing the green infrastructure mentioned above could help NYC reach 40% of its zero waste goals, generate enough renewable energy for 30,000 homes, and remove the GHG emissions equivalent to taking 150,000 cars off the road. It could also reduce sewer overflow in the Long Island sound by 9 billion gallons every year, reducing the abnormally high levels of nitrogen in the water and paving the way for repair of the ecosystem. Moving waste management plants from the South Bronx to Rikers could improve the health of the neighborhood, which holds the record for the worst asthma rates in NYC.

SO, WHAT’S THE POINT?

We have done massive amounts of damage to our planet, particularly since the industrial revolution. Restoring ecosystems, or transforming them to serve new purposes that will lead to environmental repair, is crucial in our fight against climate change. Some of the decisions we’ve made simply need to be undone, and we’re grateful to see that change taking place.