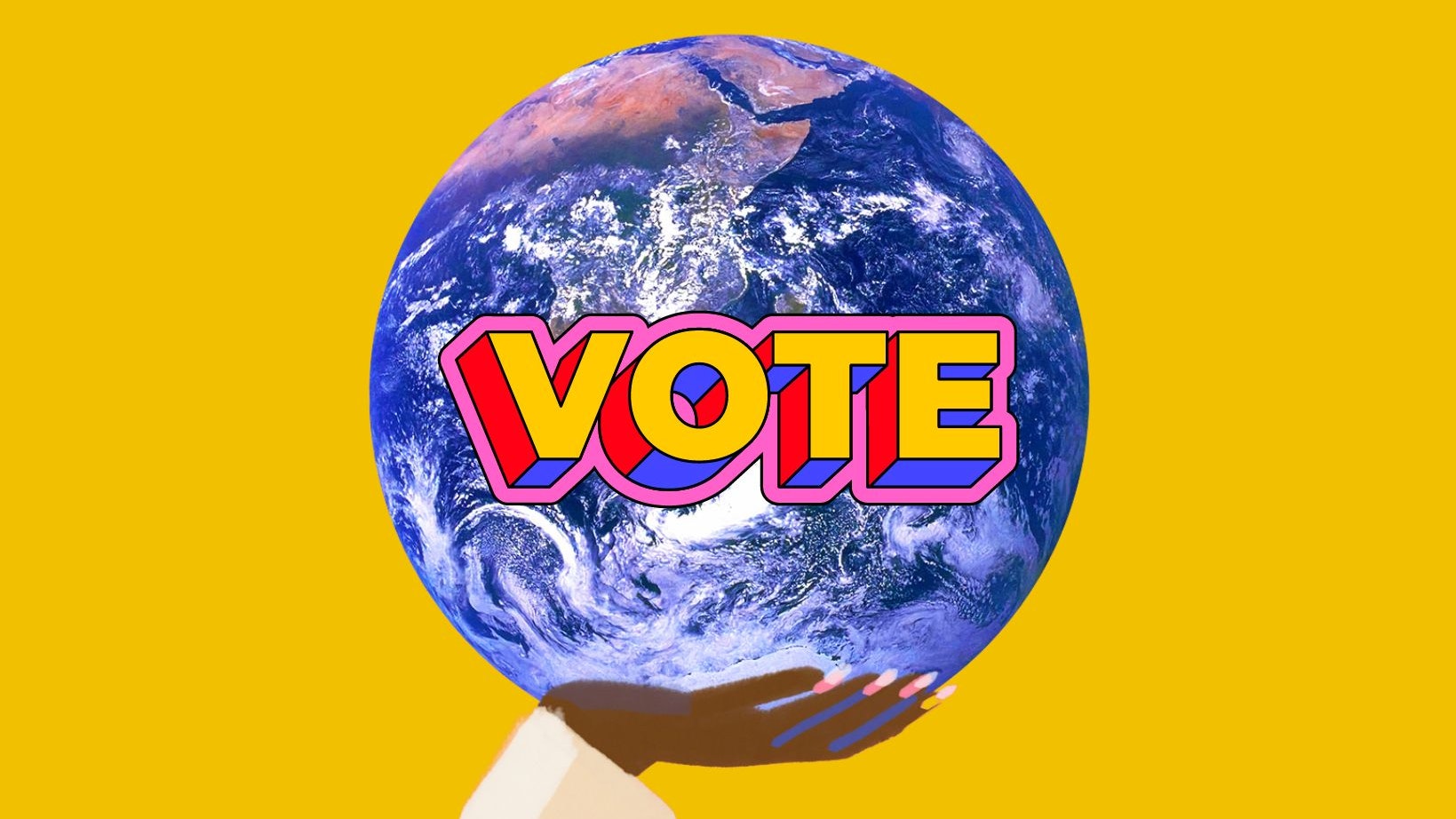 Ahhhh… it smells like fall. And also… election season. This midterm election, on November 8th, eligible voters are casting ballots for a third of senatotcs and all congresspeople, as well as state-wide and local ballot measures. While basically everything has to do with sustainability in some way, this is a direct opportunity to impact climate policy. These senators, congresspeople, and pieces of legislation, inform how we, as a country, approach the climate crisis.

This election season is especially pivotal for the next two years of climate policy, so let’s get into how voting can impact climate change, and what policies, legislation, and people we should keep an eye on.

Here’s our round-up of helpful hints when it comes to voting with the planet in mind.

#1 Make sustainability key to your vote

#2 Familiarize yourself with pivotal legislation

History of voting in the United States

Before we dive into the meat of this conversation, we have to set ourselves in some voting-related context. Voting in the United States has a pretty tough – and by tough we mean exclusionary and oppressive – history. At the founding of the United States (read: colonization and genocide of the Indigenous peoples of North America) only white, landowning men could vote. Since the 1700s, we've made some pretty significant strides toward increasing access to the ballot. However, we are still seeing voting barriers, especially for historically marginalized communities, including lower-income and BIPOC folks, not to mention older and younger people. This includes strict voter ID laws, limited voting times, restrictions on registration, and the purging of voter rolls. Smells like voter suppression, huh?

There are systemic factors at play that make it quite literally difficult to exercise your right to vote if you’re a member of one of these groups. Let’s take a look at what we can do to make voting more accessible and, in turn, vote for policies, legislation, and people that center on impacted communities and the planet.

#1 Make sustainability key to your vote

There are a lot of things to keep in mind when hitting the ballot box – we’re talking about infrastructure bills, policies that influence the economy, social welfare considerations, and more. When thinking through candidates and legislation you support, take some time to think through what your priorities are. For example, are you willing to vote for a candidate that has a softer stance on addressing climate change, if it means higher taxes and more funding for schools?

Recent polling has shown that climate change is not the number one driving factor for most voters, coming in far behind the economy. However, it is a highly motivating topic for some groups of people. Data shows that younger people really care about tackling the climate crisis and are more likely to vote for candidates that center this on their platform. It has also been shown that where constituents live can also inform their stance on climate. For example, in tight, competitive races in Arizona and Nevada, addressing drought (exacerbated by climate change!) could be pivotal in determining the winners of these respective campaigns.

When considering who and what you want to vote for, take some time to evaluate their platform. Ask yourself, does this candidate…mention the climate crisis? Do they have actionable steps in their policy plan to address climate change? How are they willing to invest (money, time, and energy) into sustainability efforts?

#2 Familiarize yourself with pivotal legislation

If you’ve read pieces of content on Finch’s Decoded Blog, you’re familiar with the idea that sustainability is built into just about everything. Intersectional sustainability (the kind we’re a fan of) requires that we understand how people impact the planet, and vice-versa. So, when it comes to considering pieces of legislation that center around climate, it’s important to think expansively. How will a bill that addresses gas prices impact pollution or emissions? How will a bill that targets the funding of public schools reflect environmental justice? One piece of legislation that does it all (well, not all, but a lot) is the Build Back Better Act.

The Build Back Better Act is a piece of legislation proposed by the Biden administration. The Build Back Better Act was passed in the House in November 2021 and was then bumped to the Senate, where significant revisions are being worked on. The Act does a whole lot for many areas -- including expanding access to education, senior care, expansion to the American Rescue Plan, reduction in prescription drug costs, investments in affordable housing and nutrition security, immigration reform, and some very significant investments in climate action. It includes sweeping shifts away from fossil fuels towards clean energy and electrification, redistribution of project returns to historically marginalized communities, and historic investments in coastal restoration, forest management, and soil conservation.

Can you say booyah?

Unfortunately, that big booyah should be more of a whisper booyah, because it’s not a sure thing. This midterm season, there are 10 Senate races poised to be the tightest, including Arizona, Georgia, Nevada, Wisconsin, Pennsylvania, Colorado, New Hampshire, North Carolina, Ohio, and Florida. Democrats, to maintain a majority, will need to retain current seats or gain more. In the House, Republicans are projected to retake a number of seats. There are 24 seats currently held by Dems considered to be toss-ups, and 10 seats leaning Republican. To win control of the House, Republicans will need to retain current seats and gain 5 more.

We’re not here to tell you which party to vote for, but we will tell you that with a Republican-dominated House and Senate, certain policies, like the Build Back Better Act, will likely be tossed to the wayside. House Republicans announced that they will be releasing a four-part “Commitment to America” at the end of September…which includes initiatives to "put an end to 'Build Back Better’,” according to House Minority Leader Kevin McCarthy.

On the count of three say GOTV! GOTV stands for get-out-the-vote initiative. These are often grassroots initiatives – sometimes they’re sponsored by individual politicians’ campaigns – to get more people registered and exercising their right to vote. Some tactics include canvassing, phone banking, and text banking. GOTV initiatives can increase turnout and voter participation and are a key component to increasing civic engagement. We saw this happen in 2020 in Georgia. Stacy Abrams leveraged a GOTV strategy, registering more than 200,000 new voters in the 2018 election. With the support of the Fair Fight and New Georgia Project, two organizations founded by Abrams, more than 800,000 new voters were registered in the 2020 election. As a state with a history of disenfranchised voters, this was a massive turnout through investing in the votes of Black women, who are one of the most critical (and consistent!) voting blocs across the country. Sign up with organizations like Swing Left, a progressive GOTV group, to participate in some of these initiatives. Grab a friend, double your impact, and make it twice as fun!

Another way to make an impact is to engage locally. Local elections have notoriously low turnouts (which can make your vote even more pivotal) and often determine positions like County Executives and Commissioners, District Attorneys, and even School Boards (depending on your municipality). This can inform legislation related to how your municipality handles climate-related legislation, as well as other important social policies. To figure out what’s on your municipality's ballot this season, check out BallotReady’s resources. They make it easy to get information on every candidate and ballot measure on your personal ballot.