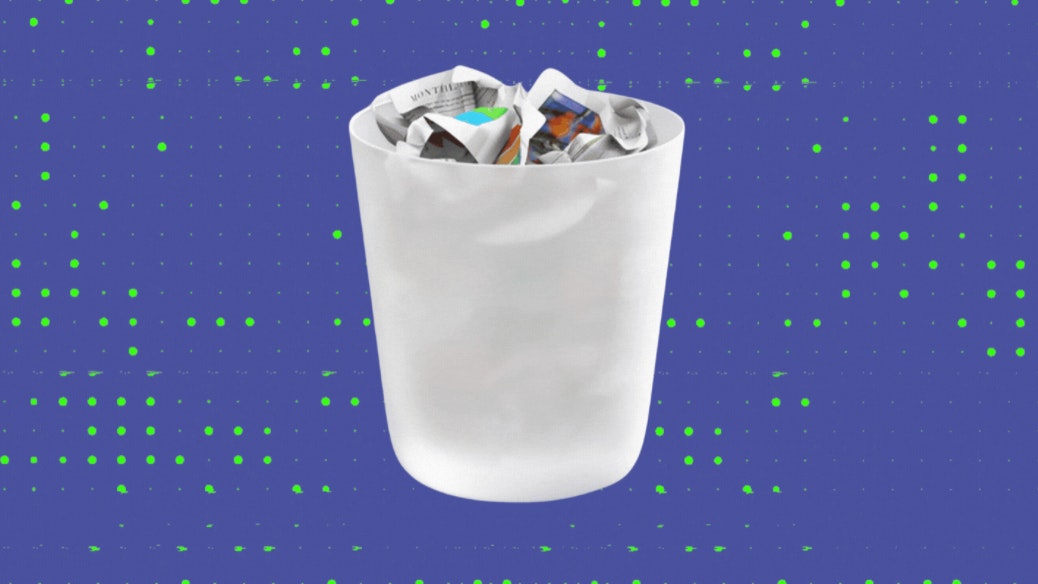 Most of the time when we create waste, we’re conscious of it. From tossing this morning’s disposable coffee cup into the trash to watching suds wash down the drain, we have an idea of what waste looks like. But what about when we use the internet? The concept of internet waste may seem oxymoronic -- how can that magical, mystical system that wicks information from someone’s desktop to someone else’s fingertips in a matter of seconds be wasteful? We’ve gone dumpster diving in the sea of all things digital to serve up the top 7 things to know about the environmental impact of the internet.

1. READING THIS BLOG IS CREATING WASTE

We’re all familiar with the satisfying *crunch* of dragging files to the digital trash, but it may come as a surprise that we’re actually creating waste right now. What!? Yes, we are creating waste by writing this online, and readers are creating waste while scrolling this page. The internet is deeply embedded into our lives, and with the increase in globalization, we continue to become even more interconnected. Internet waste refers to energy, water, land, and other resource use from storing to moving and sharing data. The amount of waste is increasing annually and is estimated to be associated with 1.6 billion tons of GHG emissions per year.

These days, we’re all likely familiar with streaming...whether via Netflix, Hulu, or maybe even live (how vintage...). Take Love Island UK Season 6. It may have a 5.7-star rating on IMDb, but a 10-star rating in our hearts. It’s almost 41 hours long, with 49 episodes. Every time the full series is viewed on Netflix, it takes 1GB of data per hour to bring the content to your TV screen (telly?), with your individual router and network. And, considering how addictive it is to watch the intricate love lives of strangers, let’s say the season is viewed 8,000,000 times. If we then think of all the TV shows on the internet, on all the different streaming platforms, we’re looking at a massively wide expanse of data and media content -- quite literally gigabytes on terabytes on megabytes. That’s not even considering all the other kinds of ways we use the internet outside of watching TV.

3. THE INTERNET OF THINGS IS PUTTING INCREASING DEMAND ON RESOURCES

The internet is part of a network of tangibles (ex. routers, computers, software) and intangibles (the *internet*) that is known as the Internet of Things (IoT). Yes, it does sound like a futuristic discovery in a sci-fi novel, but it’s also been a commonly used term in Big Tech since before Y2K. With the rate of new internet-enabled devices and data-intensive services growing exponentially, the demand we put on resources is going to grow with it. It’s projected that by 2030, the internet could contribute to more than 25% of all GHG emissions. Every time data is saved or transmitted by watching TV or scrolling the web, more storage is needed. All of the resources that go into storing and sending this information is where the waste comes in.

We have now conceived of how much data is out there floating around, but what would it look like if it were in front of us? If we printed out all the digital content and put it into books, the stack would quite literally stretch from Earth to Pluto ten times. In a way, we do kind of bind and alphabetize data — in data centers. Servers upon servers live in warehouses because the data ultimately has to live somewhere in our tangible world. These data centers are massive buildings filled with computers that span anywhere from 500,000 square feet to 30 acres (for context, 30 acres is almost 23 football fields). From computation requests, to running storage, to staying online and connected to the internet, running these buildings takes a lot of energy. Have you ever felt the bottom of your computer get really hot on your lap? That’s because energy is converted into heat. So, to keep these buildings from overheating, cooling systems run water or cool air throughout. Some of the biggest data centers globally require the amount of energy that would power roughly 80,000 households in the United States.

5. MORE AND MORE PEOPLE ARE USING THE INTERNET ALL OVER THE WORLD

You may have heard of the digital divide. It’s the systemic socio-economic gap that restricts access to technology and computers. While this is a very real issue, information technology (IT) is kind of unique. For example, only 6% of the world’s population flies annually (pre-pandemic), whereas 40% have home internet access. While that’s still a vast majority of folks without internet, access is increasing -- every day for the past five years, roughly 640,000 people have gone online for the first time. This is also happening in lower-income, resource-scarce countries such as India, Bangladesh, Cote d’Ivoire, Ghana, and Malawi, all of which have more than doubled their number of users in the past three years. The internet has the power and possibility to democratize access to information and that’s an important counterbalance, even when talking about the wasteful impacts of the internet. The internet offers tangible benefits to the lives of historically underrepresented and historically marginalized individuals -- so, how can we improve access while also being mindful of the environmental harms?

6. OUR OBSESSION WITH THE INTERNET IS NON-FUNGIBLE

So, what about other waste-making internet trends on the rise, like cryptocurrencies, and specifically NFTs? Say it with me now, “non-fungible token.” Most simply, NFTs are a digital component (like Bitcoin or Ethereum) that represents a real-world or intangible item, like art, music, or videos. Once purchased, an NFT authenticates the digital asset as an original. Think along the lines of figuring out if a Picasso is a fake or forgery -- the original item incurs a higher price. The ‘NF’ in NFT means that an NFT cannot be exchanged for another NFT - they're not inherently the same value based on the same currency. The NFT of the 2007 viral video, “Charlie Bit My Finger,” just sold for $761,000. Even more incredible, that’s relatively cheap as far as NFTs go. A digital piece of art was just sold by Christie’s Auction House for $69 million.

Every time an NFT is sold, converted, or minted, more data and computer hardware is being used — and we know where that goes and what that means. Without extreme transparency in all steps of the non-fungible process, it’s difficult to calculate the carbon footprint of a single NFT. Estimates range from 33.4kg to 48kg CO2e. 33.4kg of CO2e is roughly equivalent to the emissions created when the average US car drives 69 miles, or when a plasma big-screen TV is on for 246 hours (that’s six seasons of Love Island). It’s hard to wrap our heads around the fact that something so conceptual and puzzling could not only be sold for more than half a million dollars, but also creates huge amounts of emissions. Ahhh. Welcome to the future.

7. MICROSOFT IS CREATING AN ATLANTIS FOR DATA CENTERS

Microsoft has been tackling some of the most energy-intensive, emissions-heavy components of internet services. Microsoft has developed cooling fluids to house server racks. The fluid removes heat in a closed-loop cooling system, requiring no energy to move the liquid around the tank or to cool it. Even *cooler*? Microsoft’s Project Natick is investigating the possibility of putting data centers, powered by offshore renewables, in oceans underwater, in an exciting, Atlantis-style approach. While we don’t yet know if the project will be successful, the preliminary data has been collected and researchers are analyzing it now. Innovations like these make it possible for us to envision a future where increased demand on data centers does not have to be paired with the detrimental impacts that traditional servers and cooling systems pose to the planet.

FINCH IS AN INTERNET-BASED BUSINESS, SO...

We don’t create tangible products. And while our impacts are a little less obscure than the environmental impact of NFTs, we’re still a technology company and we do have both environmental and social impacts. This includes how we manage data. Every action or choice we make has an impact and creating internet waste is one of them. While we plan to avoid purchasing cryptocurrencies, this is an issue, not unlike Regenerative Agriculture, that requires innovation from governments, the for-profit sector, and independent research institutions.

Next time you’re surfing the web, be aware of the environmental impact because even though we can’t see it doesn’t mean it isn’t there.