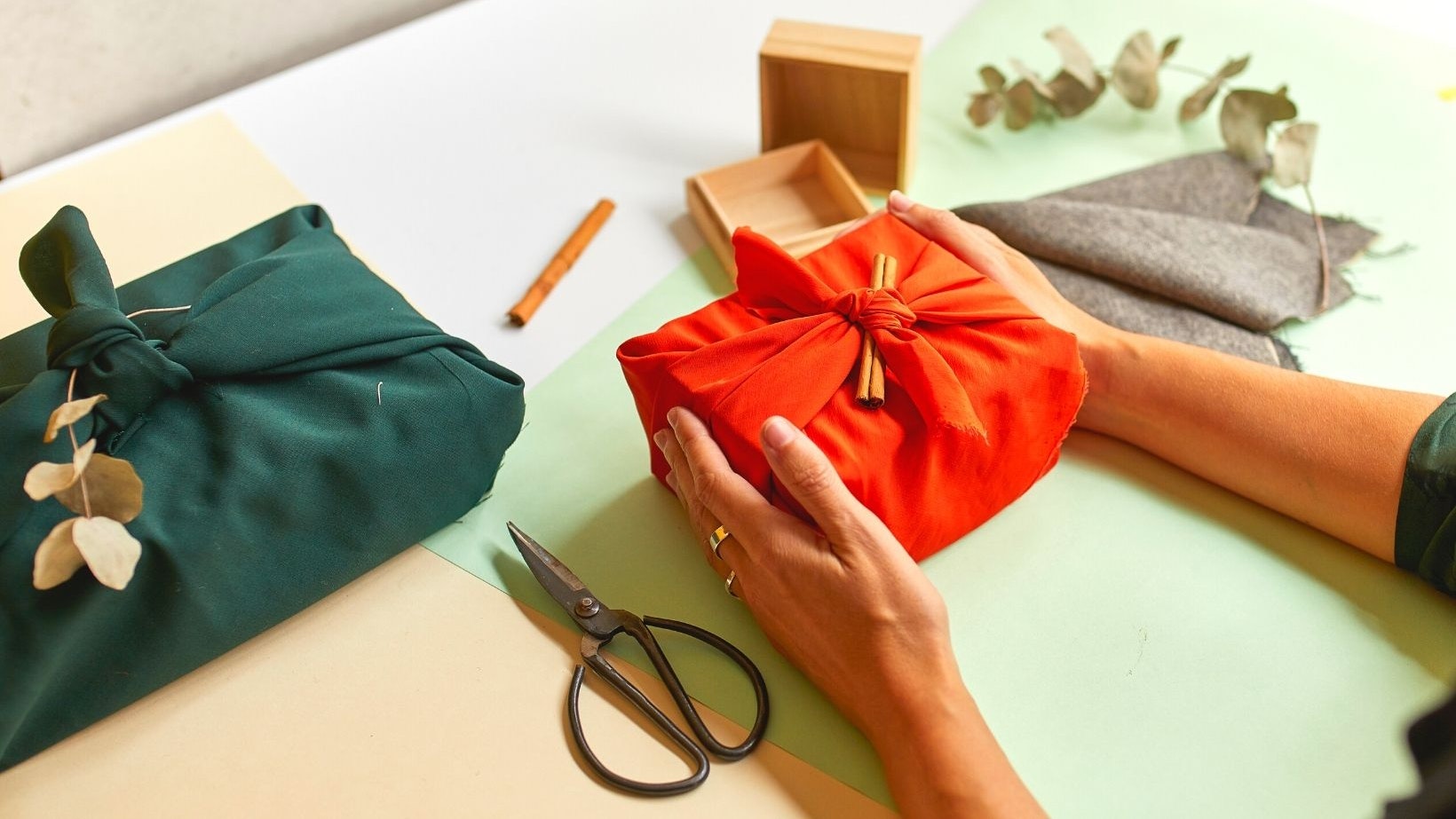 Why do we wrap presents? And, why do we do it with glorified glittery tree pulp? While a 1992 study shows that it may be more enjoyable to have that extra thrill of unwrapping a surprise, at the end of the day, is a gift more valuable when it’s wrapped in wrapping paper?

With over $8 billion spent on single-use wrapping paper in America each year, according to Sundale Research, amounting to about 4.6 million pounds of wrapping paper waste annually, we set out on a search to find out what the real impact of wrapping paper is and whether there are alternatives that keep that ‘ooh-aah’ moment of joy.  I mean, why spend your money on something that’s going to be ripped up and thrown away in a matter of seconds?

HERE ARE OUR TOP TIPS TO GIVE THAT UNWRAPPING BLISS WITHOUT ADDING MORE PAPER WASTE.

This holiday season, instead of buying a new roll of shiny paper covered in dancing penguins, we suggest repurposing something that you already have, or buying something reusable and/or recyclable.

1. Give Fabric a New Life

3. Try Something Other than Tape

4. Forage for that Final Touch

5. Put Wrapping Paper in the Trash

GIVING UP WRAPPING PAPER IS A NO-BRAINER...RIGHT?

Do you have any fabric scraps left over from that quilting project you attempted ages ago? Maybe a scarf you never liked? How about that tea towel you never use, or a dust bag, or one of the thousand cotton totes sitting around your house?

All sorts of fabric work great for wrapping presents. If you don’t have anything on hand, consider hitting up a local junk shop or second hand store for something inexpensive. Better yet, ask a neighbor to see what they have laying around — what spreads more holiday cheer than working together to eliminate the idea of waste? (Anyone have a knack for jingles that could turn that into our new favorite holiday tune?)

At the end of the day, fabric could be neatly folded and stowed for the next holiday season or put into use by the gift recipient.

Chances are you probably have some paper lying around your house that you could use. Old newspapers can make really fun wrapping paper, as can pages from magazines, because you can customize each gift for the recipient’s personality. You could even reuse the tissue and paper packaging from all of your Black Friday shipments.

If you’re running low or just have loads of gifts to wrap, brown kraft paper is recyclable and inexpensive.

Whatever you do, avoid glittery anything at all costs. Glitter is basically pre-made microplastic that can easily find its way into rivers and oceans, polluting our waterways and disrupting aquatic ecosystems. There’s nothing festive about that.

#3 - Try Something Other Than Tape

That plastic stuff we’re all accustomed to using is not recyclable due to the tacky resin that makes it adhesive, and it could be unnecessary if you’re avoiding slippery wrapping paper.

#4 - Forage for that Final Touch

Instead of tinsel, ribbon, and plastic bows that stick to everything but that wrapped present, try decorating your gifts with things like dehydrated orange slices, cinnamon sticks, or fresh sprigs from a local pine tree (either inside or outside the house).

This is a great alternative if you or your giftee has a compost bin because these plant-perfect goodies would need to be disposed of properly. This is a great way to minimize plastic waste, but we always want to be careful not to contribute to the unintended consequences of sending organic material to landfill.

#5 - Put Wrapping Paper in the Trash

If you get something wrapped in glittery paper, please trash the paper.

Unfortunately, that glittery, shiny tissue and wrapping paper we love cannot be recycled, so most of the wrapping paper tossed every year gets sent to landfill.

While this definitely contributes to our post-holiday slump, we can’t hide from the realities of our current recycling infrastructure. When these items end up in the recycling bin, they can make the entire load unrecyclable. No, thanks.

The tradition of wrapping presents has been around for a while. It dates all the way back to ancient China in the 2nd century BC, when people in the Southern Sung dynasty used paper to wrap gift money, mirrors, and other objects.

Since then, people have used many different things to  wrap presents — from lace to tissue to sturdy manila paper.

Believe it or not, however, wrapping presents was solidified as a modern-day gifting must by accident. The story goes that in 1917, a pair of brothers running a stationery business in Kansas City (called Hallmark) ran out of the tissue paper they traditionally sold for gift wrapping.

Instead of going into a pure panic, they began selling the paper they used to stock to line the inside of envelopes. The lining paper was a smash hit amongst their customers and, in 1919, they began selling paper specifically designed with creative patterns for wrapping presents.